So pretty. So much light pollution. 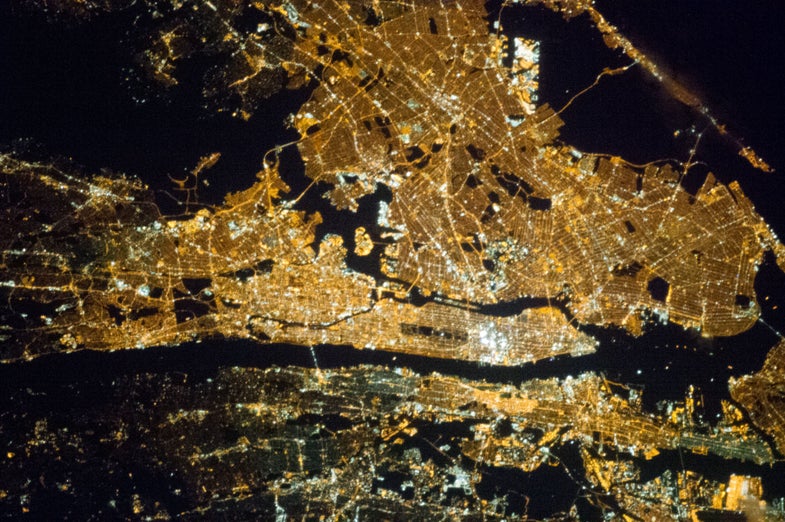 Everything’s brighter in America—and that’s not always a good thing. In a new analysis, researchers from Germany and Spain calculated that U.S. towns emit several times more nighttime light per capita than German ones do. The bigger the city, the bigger the difference. An American town of 10,000 is, on average, three times as bright as an equivalent German town, while Chicago (with its 2.7 million residents) is nine times brighter than Berlin (population: 3.5 million).

Although there are some mitigating factors—we’ll get to those later—the analysis offers some evidence that U.S. cities shine more light than they need to at night. Normally, you would expect cities in equally developed countries to look equally bright from space.

Might the U.S. consider turning down the lights? There’s growing evidence that too much nighttime lighting is bad for human health, and it can harm wildlife as well. Cities often light their streets at night to discourage crime and prevent traffic accidents, which is important. However, perhaps they don’t need to be quite so bright for safety. The Berlin Senate analyzed accidents in the city from 2006 to 2008 and found they weren’t correlated with how bright the streets were.

Berlin itself is unusually dim. The city has policies discouraging unnecessary nighttime lighting. Overall, Germany “has a reputation within Europe for conservative lighting practices,” the researchers wrote in a paper they published in the journal Remote Sensing. They conducted their analysis using photos taken by astronauts aboard the International Space Station—thus “remotely sensing” what lights are like on the ground.

Besides comparing U.S. cities with German ones, the researchers also took a careful look at Berlin. They found something funny. Although the Berlin Wall fell 25 years ago, lasting effects of Germany’s Cold War divide are visible from space. Light in the former East Germany is mostly orange, indicating it uses sodium lamps, which were invented before the 1980s. Light in the former West Germany is mostly white. White light often comes from more modern fluorescent and LED lamps, although it can also come from old metal halide lamps. Either way, you can see that the groundwork for Berlin’s lighting was laid before the fall of the Berlin Wall. 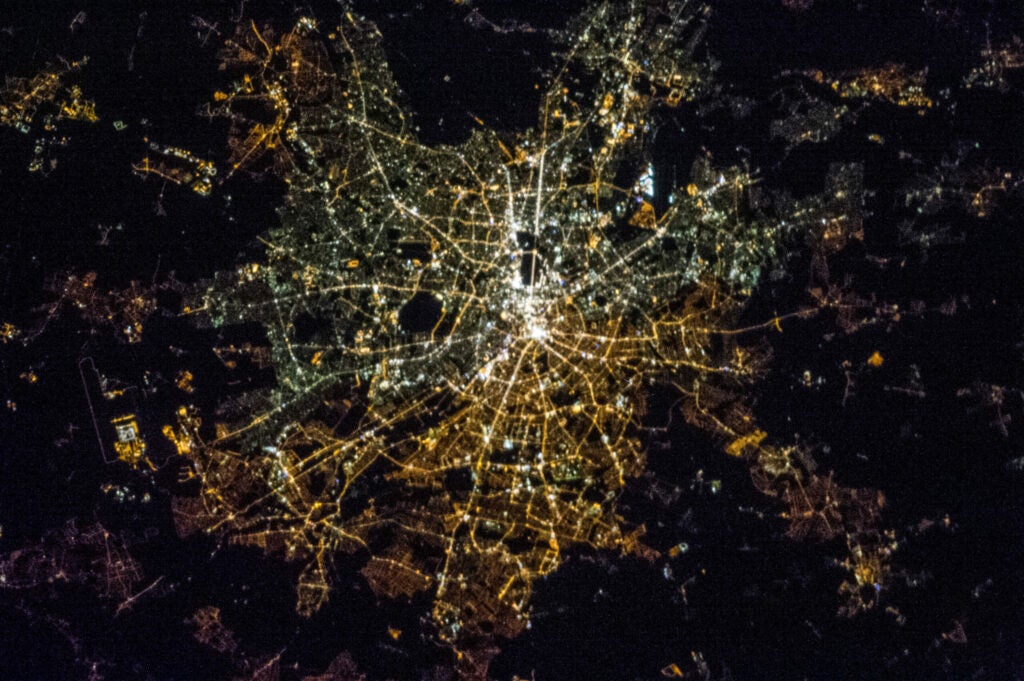 Although U.S. cities look brighter from space, and they certainly could be, another possible explanation is that U.S. streets may be wider and less tree-filled than old European ones, so the light escapes more. The German-Spanish team that analyzed the ISS photos couldn’t say for sure why American cities are brighter.

Luckily, there’s plenty of data for future researchers to crunch. Since 2012, a couple of new eyes in the sky have made detailed studies of city lights easier than ever. One is the European Space Agency’s NightPod, an instrument ISS astronauts are testing that helps cameras track the Earth as it passes by below, allowing for longer exposures and better photos in low light. The other is the Visible Infrared Imaging Radiometer Suite, which NASA’s Suomi NPP satellite carries. We’ve seen NASA researchers use VIIR data to check the effect of the winter holidays on the U.S.’ electricity use.