The space agency wants to turn the Red Planet into a busy helipad. 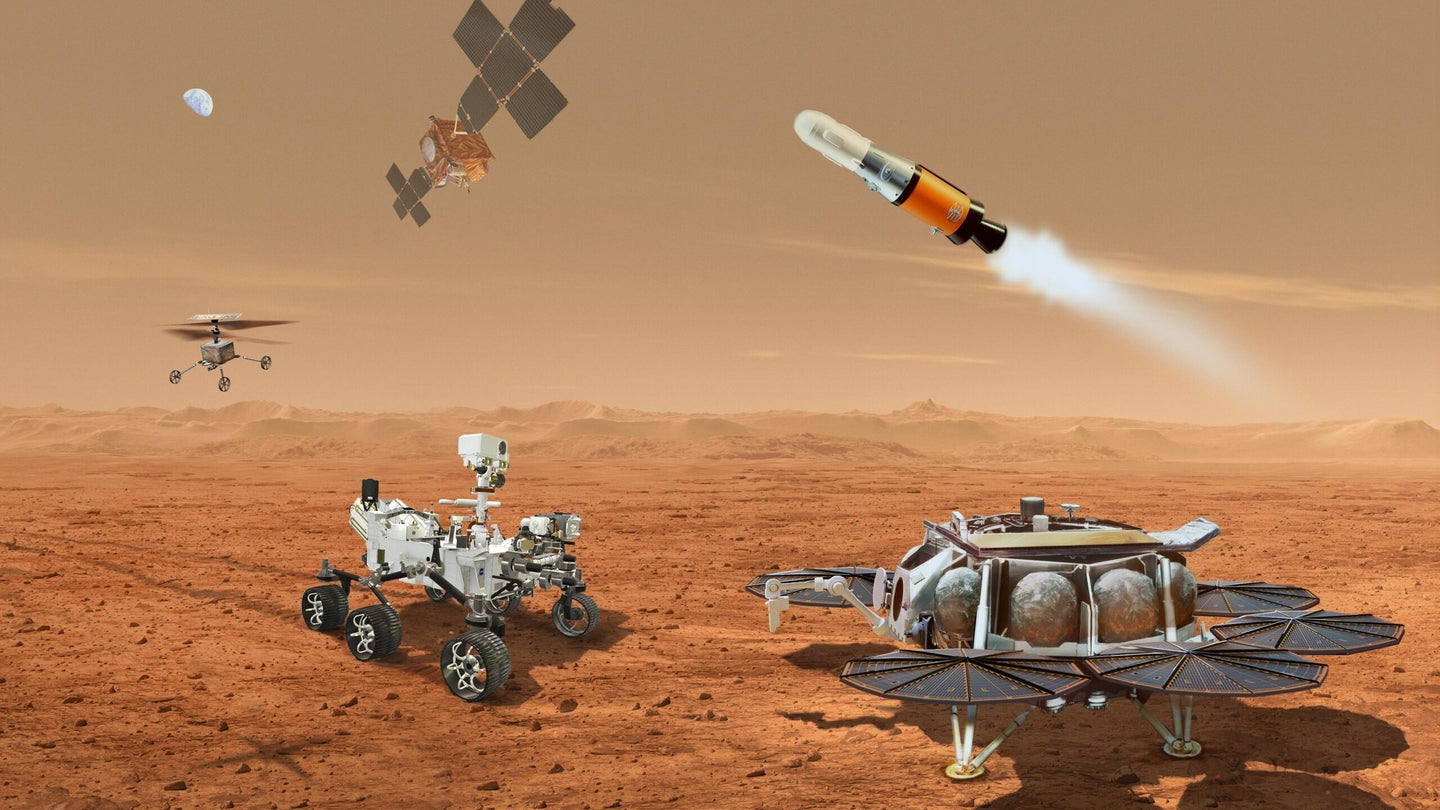 A fleet of vehicles will be required to deliver rock samples from Mars to Earth in the early 2030s. Jet Propulsion Laboratory
SHARE

NASA’s Perseverance rover is currently collecting rock and soil samples in Mars’s Jezero Crater that will one day be returned to Earth. Under the current plan, in 2030 the rover itself will deliver the sample tubes to a Mars lander for transport back home. But, if something goes wrong, a pair of small helicopters will be poised to swoop in, as NASA’s Mars Sample Return team announced in late July.

If that occurs, the Sample Recovery Helicopters will be the second and third rotorcraft ever to take flight on another planet. And their inclusion in the Mars Sample Return mission, a joint effort by NASA and the European Space Agency, could signal the beginning of a new chapter in Mars exploration—one in which small, lightweight helicopters regularly zip around the Red Planet.

The news of adding helicopters to the Mars Sample Return mission comes just over a year after the first aircraft in history took powered flight on another planet, when NASA’s Ingenuity helicopter ascended to the Martian skies in April 2021. Since then, the experimental rotorcraft has taken 28 more flights, far surpassing expectations.

“The whole point of Ingenuity was to be that Wright Brothers moment that leads to some future down the road of additional aerial exploration of Mars,” says Teddy Tzanetos, the Ingenuity Mars Helicopter Team Lead at NASA’s Jet Propulsion Laboratory. “Ingenuity’s goal was to make flying boring… Now we can just keep doing boring flights and doing exciting things with boring flights.”

Initially, the Mars Sample Return mission concept included a so-called fetch rover: A robot capable of collecting the samples already cached in tubes by the Perseverance rover. The fetch rover would have ferried them several hundred yards across the Martian surface to a lander near Jezero Crater, where the sample tubes would be transferred to the Mars Ascent Vehicle. The rocket-powered ascent vehicle would then launch the container with the sample tubes into orbit where a spacecraft with its sights set on returning to Earth would be waiting.

But, says Ann Devereaux, who is the Mars Sample Return Deputy Program Manager, “getting a rover that was big enough and capable enough to go and do a reasonable job of collecting samples was problematic.” It would be costly to design and ship such a rover along with the Mars Ascent Vehicle.

The team was exploring other concepts right as Ingenuity took its first test flights. After the rotorcraft proved to be a success, the engineers began to study whether helicopters might be the best option for fetching the samples cached by Perseverance.

[Related: This sailplane could cruise Mars for months on only wind]

Helicopters are smaller, lighter, and more nimble than rovers in many situations, Devereaux says. Although the aircraft need a secure place to land, they don’t have to worry about traversing dunes on weighty tires.

Designs for the sample return helicopters won’t differ much from Ingenuity. “When you’re talking about robots in space, heritage is extremely important,” Tzanetos says. “We want to stick as close to Ingenuity design as we can because we know that it’s reliable, we know that it’s robust.”

Because Martian air is so thin—about 1 percent of the density of Earth’s—any aircraft on Mars has to be extremely lightweight and have large, fast-spinning rotor blades to provide sufficient lift, he explains. Ingenuity’s repeated flights confirmed NASA’s aerodynamic simulations were accurate–so much so the models will guide how engineers build the new pair of flying robots.

The sample recovery helicopters won’t be an exact replica of Ingenuity, though. The team will have to make some tweaks, Tzanetos says, because these two rotorcraft will have to do more than just fly. They will need to travel about 2,300 feet from the lander to the cache depot site, pick up a tube, fly back to the lander, and drop it off in a designated drop-off site–and then repeat that cycle 15 times, he says.

And that means the helicopters will have to support more weight than the 4-pound Ingenuity. The current concept design for the sample retrieval helicopters calls for additional tools, like arms to pick up samples and wheels to maneuver at the cache depot and drop sites, that could add another pound to the robots, according to Tzanetos.

“We’ve done the calculations, we figured out there’s certain changes we can make to the rotor system to get it to lift more mass,” he says. Now that the Mars Sample Return mission leaders have decided to go ahead with the fetch helicopter concept, Tzanetos and his team are focusing on making those tweaks.

One of their first steps is to determine how much further they can push Ingenuity’s original rotor system. Just in case the Martian environment was more challenging than the team’s models predicted, the engineers designed the test helicopter to have more lift than thought necessary.

“We’re starting to work on figuring out what is the optimal point where you trade off all of these different mass applications,” he says. “We can spin the blades slightly faster, we can demand more out of the rotor system, for example, and we can carry a heavier aircraft that allows us to accomplish the mission.”

The helicopters may not end up being needed at all, however. They will be flown to Mars just in case the Perseverance rover cannot deliver samples or the robot meets its demise before the retrieval is complete.

But the future of helicopters on Mars may already be foretold by Ingenuity’s success.

“This helicopter has been phenomenal,” Devereaux says, describing how Ingenuity proved it could fly in front of the Perseverance rover and scout ahead for the rover’s on-the-ground sleuthing. She adds that helicopters offer us an additional perspective of our neighboring planet. Perhaps one day a drone-like rotorcraft could swoop through canyons like those that make up Valles Marineris, revealing the geologic layers of the Red Planet up-close where rovers can’t go.

“Rovers have now become common” for Martian exploration, Tzanetos says. “We understand how to build rovers, we understand how to operate rovers. I’m hoping that we will be saying the same thing about helicopters in the decades to come.” Perhaps fleets of aircraft, he says, with wings like planes or copter-like blades, will one day fill the Martian skies.