Why was the Saturn V Black and White?

The Saturn V is an iconic rocket, and its black and white paint scheme is pretty easily recognizable to even... 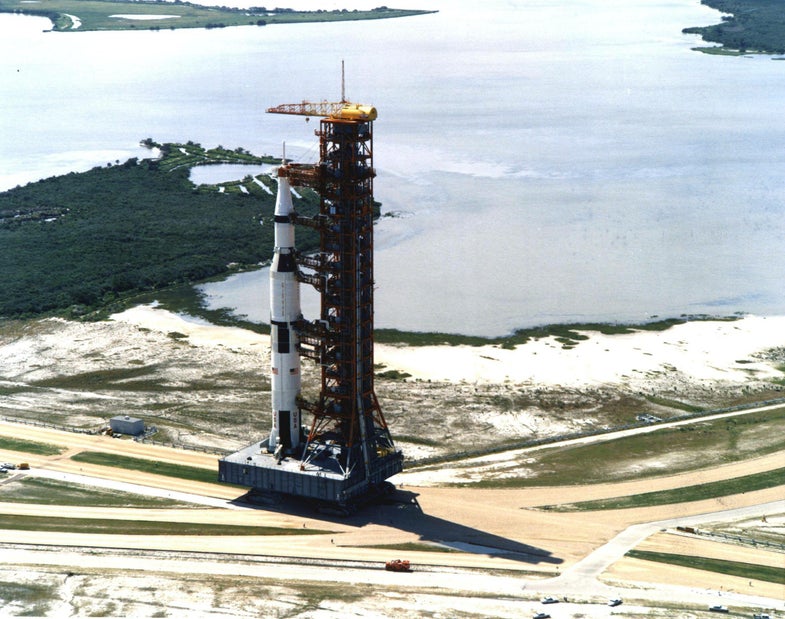 The Saturn V is an iconic rocket, and its black and white paint scheme is pretty easily recognizable to even casual space fans. And like its technological heritage, we can trace its stylistic roots to WWII Germany as well.

Before serving his key role in developing the Saturn V rocket that launched astronauts to the Moon, Wernher von Braun along with his fellow German rocket engineers developed the A-4, also known as the Vergeltungswaffe Zwei or V2 that fell on London in the closing months of the Second World War. The test versions of those rockets were painted with a large checkered pattern, not for style but for data purposes. The pattern would make it obvious if the rocket rolled in flight.

The black and white paint scheme migrated to the United State with the German rocketeers after the war ended and was featured on the rockets these men helped design and build for their new home country. The Redstone and Jupiter ballistic missiles, the latter of which launched America’s first satellite, Explorer 1 in 1958, was white with black stripes to show roll. When the Redstone was modified to launch suborbital Mercury missions, it featured alternating black and white stripes on its upper stage for ground tracking purposes.

German-heritage rockets didn’t fly again with astronauts on board until the Apollo program began launching the Saturn family of rockets. Beginning with the Saturn I.

The first four Saturn I flights, SA-1 through SA-4, featured alternating black and white stripes on the first stage, a checkered pattern on the interstage, and an all-white second stage. The problem with this scheme soon arose. The fuel tanks under the black areas registered heat spikes as the paint absorbed the heat of the Sun. But these black stripes did change from launch to launch. Rather, the upper stages changes. SA-5 launched with a black nose cone while SA-6 and SA-7 both featured a black forward interstage. Later launched saw the upper portion of the rocket painted entirely white.

Following the Saturn I was the Saturn IB. The first rockets that launched AS-201 and AS-202 were white with vertical black stripes on the first stage. Subsequent Saturn Is followed this scheme with the addition of a black interstage, until the Skylab program. For these launches, the first stage was painted entirely white to minimize heat absorption from the Sun.

Which brings us to the Saturn V. The first Saturn V that rolled out of the Vehicle Assembly Building in 1966 wasn’t a flight article, it was a dummy rocket designed to check out the launch and mating facilities as well as verify checkout procedures while also training crews in dealing with the mammoth rocket. It was the Apollo-Saturn 500F. This rocket was white with black stripes rising about a third of the way up the first stage and continued on the upper part of the stage and onto the aft interstage, ending at a black ring. It also had a black and white checkered pattern on the upper interstage and a black instrument unit. But that black ring caused a lot of problems. The paint absorbed enough heat from the Sun that the fuel tanks underneath got dangerously hot. The upper upper part of the black stripes and the band on the first stage was painted over in white on all subsequent Saturn Vs.

So the Saturn V’s iconic paint scheme was always a practical consideration. That it looks amazing was sort of a happy accident.

This is a pretty condensed version of an old blog post I wrote a couple of years ago; I wanted a piece to go along with the video. That old article is here. Sources: The Apollo Saturn Reference Page; “Stages to Saturn” By Roger E. Bilstein; Postlaunch Report for the Apollo Mission A-101; Apollo Systems Descriptions Volume II; The Mercury-Redstone Project.