Mars has been cold and dry for half its life, but as recently as 500 million years ago, its surface was shaped by water. 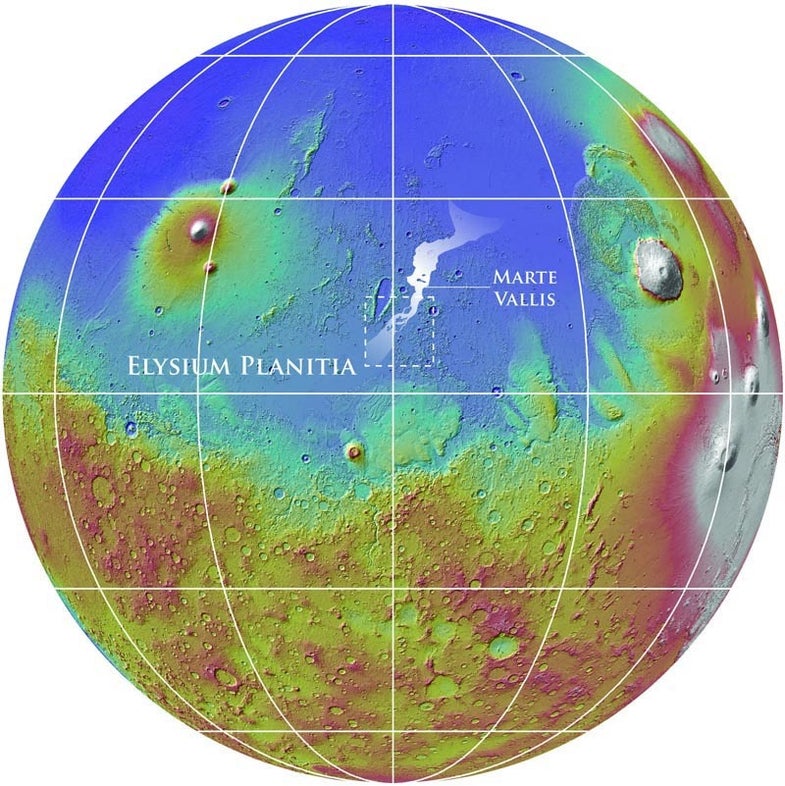 A new 3-D model of ancient Mars depicts how ancient mega-floods carved channels into the planet within the last 500 million years. While Curiosity roves across Gale Crater in search of other watery evidence, this new map will help scientists trying to understand how water shaped the planet earlier in its life.

Mars has several channels embedded in its surface, which were carved by ancient gigantic floods larger than anything known to have happened on Earth. The flood channels are distinct from alluvial fans and other drainage areas, like the one Curiosity is exploring in Gale Crater–they’re much larger, and must be the result of some catastrophically huge displacement of water. It could be from some underground reservoir that was loosed either by volcanic activity, or maybe an impact. Some of the evidence of these floods has been erased, however, including a region near the Martian equator called Elysium Planitia. 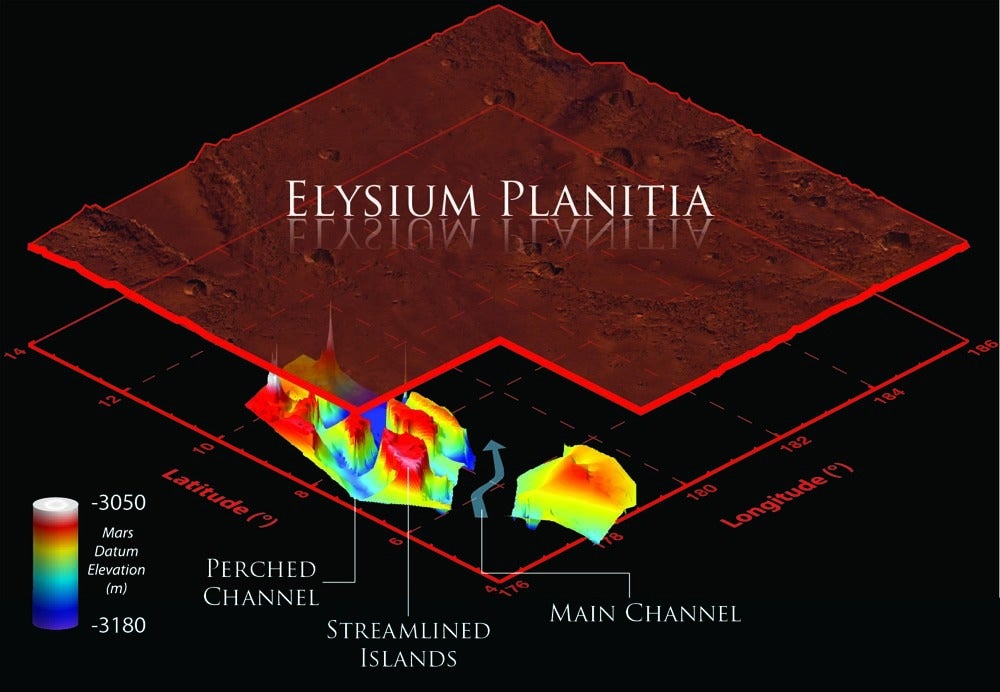 3D visualization of the buried Marte Vallis channels beneath the Martian surface. Marte Vallis consists of multiple perched channels formed around streamlined islands. These channels feed a deeper and wider main channel. The surface has been elevated, and scaled by a factor of 1/100 for clarity. The color scale represents the elevation of the buried channels relative to a Martian datum.

Lava plains cover Elysium Planitia, burying evidence of its older geologic past. Among the buried evidence is the source of the flood channel called Marte Vallis, which extends about 620 miles across the Elysium plain and 60-odd miles wide. Marte Vallis is an important flood channel in part because it’s so big, and in part because it’s so young, especially compared to other flood channels that are more well-studied. Understanding Marte Vallis will help scientists understand Mars’ recent hydrologic history, which is especially important because when this flood channel was carved, the planet was cold and dry. But to study it, scientists have to peel back the lava layers.

They did it using the Shallow Radar (SHARAD) sounding instrument and the Mars Orbiter Laser Altimeter (MOLA) on the Mars Reconnaissance Orbiter. Radar images helped scientists reveal erosion in buried Martian bedrock, and they realized the erosion was far more pronounced than anyone thought. The channel is at least twice as deep as earlier research suggested, according to the research team, which includes scientists from NASA’s Goddard Space Flight Center and Jet Propulsion Laboratory, the Planetary Science Directorate in the Southwest Research Institute, and the Smithsonian Institution.

The team was also able to map these buried channels and figure out where they came from. The great Elysium flood originated from a fracture system known as Cerberus Fossae, the radar showed. This means the floodwaters probably came from a deep aquifer, which breached because of tectonic activity.

Its deepest part compares to the largest-known megaflood on Earth, the Missoula floods, which carved out much of the western United States, the researchers say.

“This work demonstrates the importance of orbital sounding radar in understanding how water has shaped the surface of Mars,” said Gareth A. Morgan, a Smithsonian scientist who led the work. Their paper is published this week in Science.