When potatoes try to take root in your pantry, here's what you can do with them. 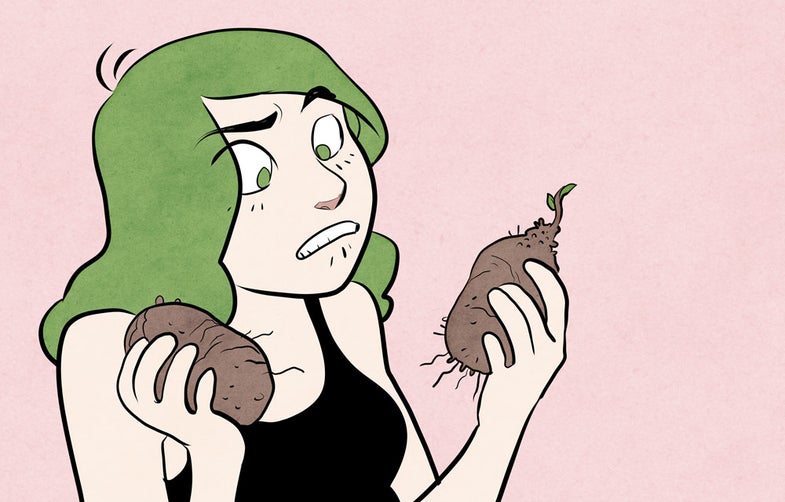 Don’t have enough cash for an Apple Watch? Try a Potato Clock instead.

I’m far from a gardener, but I do like to grow things occasionally. Ever rummage through the pantry only to find an old potato that has decided to make a run for it, spreading its roots as far as it could in search of fertile ground? When I found a whole bag of these brave tubers, I did what any sensible person would do: I planted them with the sole purpose of making a living, potato-powered clock.

A while back, I had received a potato-powered clock kit as a gift from a friend. Over the years I waited for the perfect opportunity (see: old potatoes) to present itself in order to fulfill my dream of making a solar-powered clock that ran on natural photovoltaics. Last month, when I moved into a new apartment, I decided the patio would be a great place for my new potato batteries.

Yes, the photo was taken at night. I do all my gardening at night. It adds to my mystique and keeps the neighbors talking. The matches? Couldn’t tell you. But that’s besides the point.

Initially, the clock worked like a dream, but by the next morning the display had noticeably dimmed. The next day, it was dead. My only guess is that as the potato heals, the electrodes lose access to their life-giving electrolytes. Oh well. I suppose the kit is really only good for teaching kids about chemical reactions, ions, and electron flow or some nonsense like that.

The potato battery is a time-honored home science experiment that recently, much like my reinvigorated potatoes themselves, found itself thrust into the pop culture limelight. In the video game Portal 2, evil/misunderstood artificial intelligence GLaDOS, found herself exiled from Aperture Labs and attached to a potato as a power source. Travelling around with the now-humbled PotaTOS was easily the most memorable part of the game, which of course spawned a real life DIY kit by Level Up Studios.