It's barely larger than our moon--though considering its surface temperature, you may not want to move to this cute planet anytime soon. 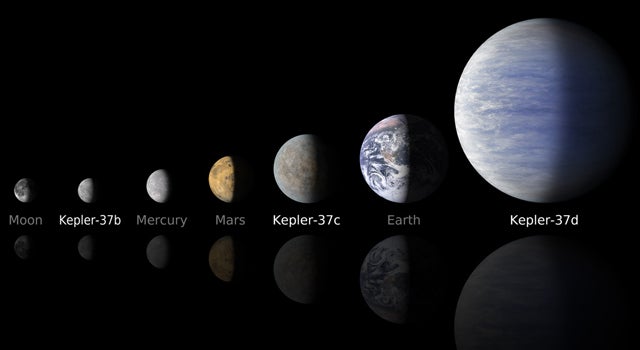 NASA announced a fun new finding from its Kepler mission today–the smallest planet we’ve ever seen, and it’s orbiting a sun that resembles our own. It orbits a star, slightly cooler and smaller than our own but in the same basic category, in the constellation Lyra, about 210 light-years away from Earth. And it has fellows: two other planets, both relatively rocky and small.

The planet, named Kepler-37b, was discovered as part of the Kepler project, dedicated to finding particular kinds of exoplanets–planets of a similar size to Earth, orbiting stars of a similar size to our sun, with the theory that life or at least water might exist on those planets. Due to the difficulty in spotting celestial bodies as small as planets, most of the findings so far have been giant, much bigger than Earth. So Kepler-37b and its two sister planets are definitely something exciting and new.

Of course, that doesn’t mean the tiny planet is habitable. NASA suspects the surface temperature on the small, rocky planet could be upwards of 800 degrees Fahrenheit, considering it orbits much closer to its star than even Mercury does to ours.

Read more about the finding here.