NASA is spending roughly $175 million on three new technology demonstration projects, one of which is aiming to take HD... 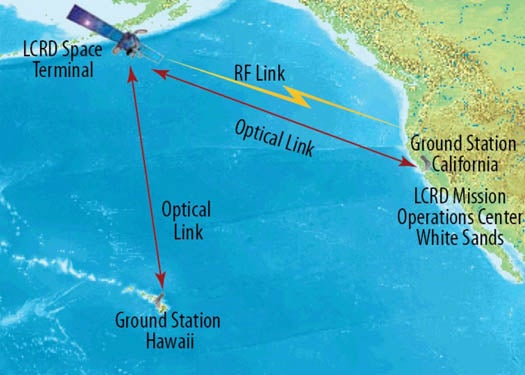 NASA is spending roughly $175 million on three new technology demonstration projects, one of which is aiming to take HD data streaming to Mars. The Laser Communications Relay Demonstration (LCRD) will explore reliable optical communications technologies that could boost data rates between Earth and deep space by a couple of orders of magnitude.

The premise is simple enough: for the same mass, size, and power load an optical communications system can provide drastically higher data rates compared to standard radio frequency (RF) systems. But it also calls for a trickier setup, requiring a clear line of sight between transmitter and receiver and considerations for variables like weather and atmospheric conditions.

The LCRD aims to demonstrate that a near earth space terminal (in this case a satellite owned by Loral Space & Communications, a partner in the project) can maintain optical communications with ground stations on Earth (one existing station in California and a couple more that will be built) and to test work around for problems that engineers foresee, like the aforementioned weather problem.

Such laser-based data transfers could increase data rates by anywhere from 10 to 100 times. Says NASA via press release:

As an example, at the current limit of 6 Mbps for the Mars Reconnaissance Orbiter (MRO), it takes approximately 90 minutes to transmit a single HiRISE high resolution image back to earth. In some instances, this bottleneck can limit science return. An equivalent MRO mission outfitted with an optical communications transmitter would have a capacity to transmit data back to earth at 100 Mbps or more, reducing the single image transmission time to on order of 5 minutes.

Eventually, the agency hopes to up those speeds such that data transfer speeds from places like the moon and Mars will be super-fast–perhaps fast enough to stream HD footage from the Martian surface, for instance. In the meantime, LCRD will develop the technology-sharing framework and a system of operational standards so private industry can get to work building the optical comms of the future.

By the way, the other two demo projects are pretty awesome as well: A space-based atomic clock to enable a kind of celestial GPS, and a mission-capable solar sail. More via the link below.