It’s tough to get a new space telescope funded — there are all kinds of budget disputes and delays that... 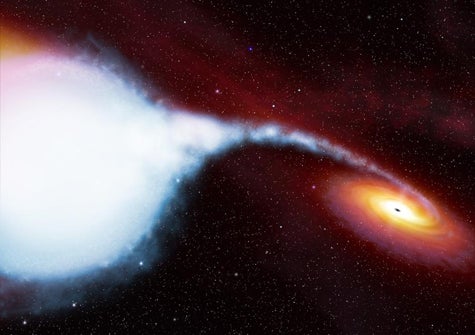 It’s tough to get a new space telescope funded — there are all kinds of budget disputes and delays that can make it difficult to ever get off the ground. Perhaps using a balloon is one cheaper solution. NASA just funded a new X-ray observatory that will float in the upper atmosphere for a day, staring at suspected black holes.

The experiment, called X-Calibur, will fly in concert with a satellite instrument called the Gravity and Extreme Magnetism Small Explorer (GEMS), and together they will examine the way that space warps in response to a spinning black hole’s gravity. X-Calibur is designed to study the polarization degree and direction of X-rays, which can be used to determine the rate of a black hole’s spin.

The balloon will hoist a 1.6 ton gondola, developed at Goddard Space Flight Center, which will carry a special X-ray mirror. The mirror focuses X-ray photons onto a scintillator rod, which scatters the rays into a detector ring. Measuring the direction in which the photons scatter can unveil the X-rays’ polarization direction, according to Henric Krawczynski, professor of physics at Washington University in St. Louis.

X-Calibur is slated to look at at least five targets, including the Cygnus X-1 and GRS 1915+105 suspected black holes; the pulsar in the Crab Nebula; an accreting neutron star called Hercules X-1; and blazar called Markarian 421, found in the Big Dipper constellation.

The balloon will lift off sometime in either spring 2013 or fall 2014, and longer follow-up flights are planned in the years thereafter. The team hopes to eventually use X-Calibur to validate the theory of general relativity near a black hole, according to a news release. And someday, perhaps launch a satellite version.