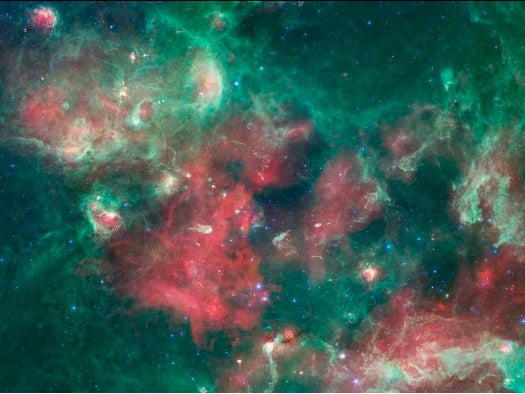 Captured in infrared by NASA's Spitzer Space Telescope, this image of Cygnus X (part of the constellation Cygnus, or the Swan) is made beautiful by massive stars that have blown huge bubbles in the gas and dust in the region. This rather violent process causes both star birth and star death--and makes for a really nice image. Since the human eye can't see light in these wavelengths, the colors have been assigned to make them visible to us. The shortest wavelengths are blue, the longer red, and the mid-range light is green. NASA/JPL-Caltech/Harvard-Smithsonian CfA
SHARE

It’s been a busy week, what with the Consumer Electronics Show and the Detroit Auto Show showering geeks and gearheads alike with enough conceptual eye-candy to keep us all salivating for the next big thing all year.

But for those of us whose eyes are on the heavens more than on little screens, the 219th annual meeting of the American Astronomical Society was the thing to watch this week.

For stargazers, armchair cosmologists, and amateur astronomers–as well as for the pros who actually devote their working hours to the study of everything beyond 62 miles up–the annual meeting of AAS is one of those special times of year when scientists and institutions pull out their best papers, their most tantalizing discoveries, and–most importantly for our purposes–their most dazzling visuals.

Nebulae. Massive star nurseries. Black holes. Maybe even a Voorwerpor two. Over the course of an AAS meeting, there are too many good images hitting the Web for us to write about them all. But as the meeting winds to a close in Austin, we’ve culled the prettiest of the pretty space pics to hit our inboxes this week and collected them one place. You probably won’t get another buffet of cosmological wonder like this until next year, so savor it.

Captured in infrared by NASA’s Spitzer Space Telescope, this image of Cygnus X (part of the constellation Cygnus, or the Swan) is made beautiful by massive stars that have blown huge bubbles in the gas and dust in the region. This rather violent process causes both star birth and star death–and makes for a really nice image. Since the human eye can’t see light in these wavelengths, the colors have been assigned to make them visible to us. The shortest wavelengths are blue, the longer red, and the mid-range light is green. 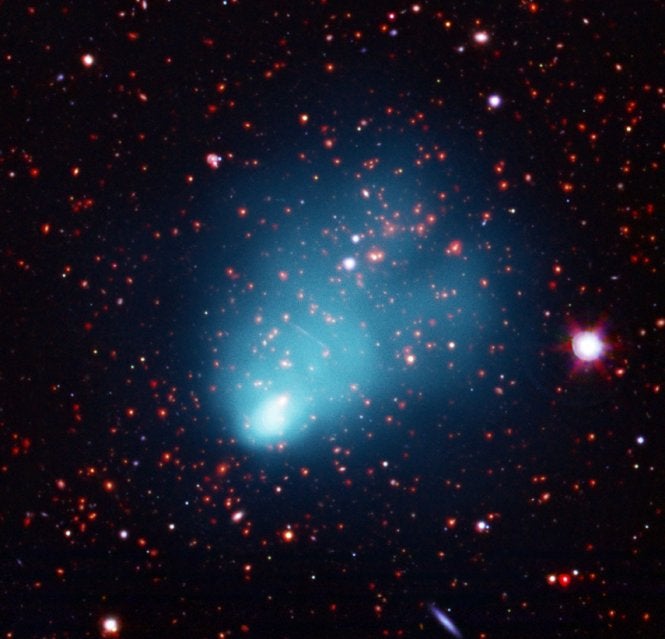 Okay, so we’ve seen prettier space pics. But we love this one for two reasons. First, because this is the largest galaxy cluster discovered in the early universe, and that’s big news. But even better, the cluster has been named “El Gordo” by the researchers who discovered it. That translates to “the fat one,” which is by no means a misnomer. Discovered by NASA’s Chandra X-ray Observatory and the National Science Foundation-funded Atacama Cosmology Telescope (ACT) in Chile (that’s where the Spanish name comes from), the cluster–officially ACT-CL J0102-4915 for those keeping score at home–resides some 7 billion light years from Earth. It’s the largest such galaxy cluster found at such a distance. Galaxy clusters, of course, are the largest bodies held together by gravity in the entire universe. And because the formation of galaxy clusters relies not just on gravity, but on dark matter and dark energy, they are also good places to study the mysterious phenomena that make up most of the universe. That means El Gordo isn’t just a big boy, but a dark and mysterious one as well. 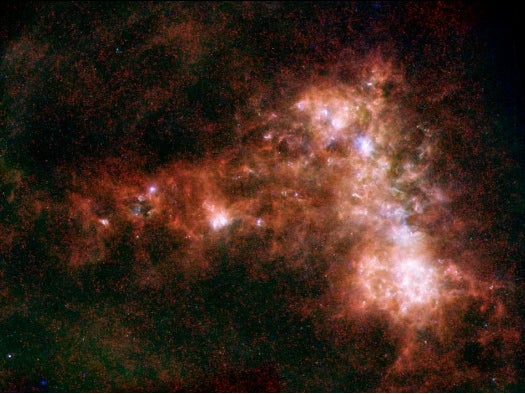 Herschel and Spitzer Walk Into a Star Bar . . .

The Small and Large Magellanic Clouds are the Milky Way’s two biggest satellite galaxies–dwarf galaxies both, but still good for observation because of their proximity. This pic, combining data from both Spitzer and the European Space Agency’s Herschel Space Observatory, shows the Small Magellanic Cloud captured in infrared. The extension of dust to the left is known as the Cloud’s “wing.” The bright region of star formation to the right is known as the “bar.” 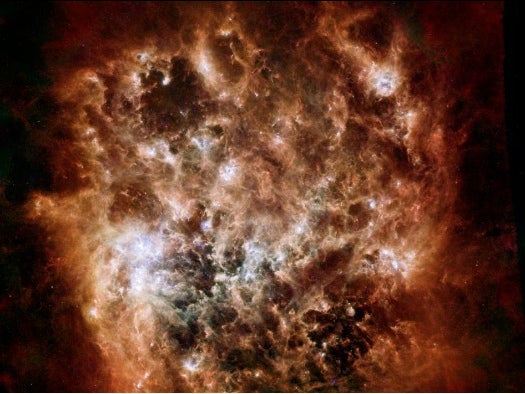 Another tandem Herschel/Spitzer shot, this one captures the bigger of the Magellanic Clouds. Though it looks like a giant flaming mass, what you’re actually looking at is flows of dust rippling out from the center for tens and hundreds of light-years. The brightest region at center-left is home to the Tarantula Nebula, so named for its appearance in visible light. 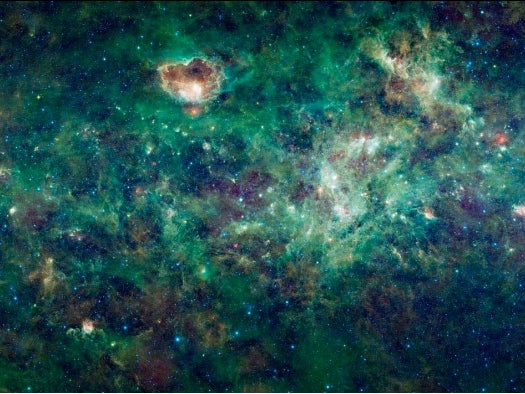 Captured by NASA’s Wide-field Infrared Survey Explorer (WISE), this image is actually a number if images cobbled together to capture a huge swath of our own Milky Way. In it, we see a number of nebulae, reminders that while it feels like we live in a pretty stable place within our little solar system, all around us stars are being born, stars are dying, and the galaxy is otherwise churning. 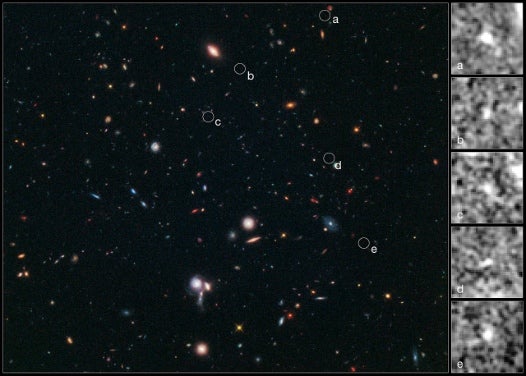 Hubble Spies a Galaxy Cluster in the Making

Not to be confused with El Gordo, the Hubble Space Telescope has peered way back into space and time–some 13.1 billion years–to see the universe as it looked roughly 600 million years after the Big Bang. And what did Hubble see? Five galaxies hurtling toward each other in what has probably by now become a massive galactic merger. But protoclusters aside, we love these wide-field Hubble images because they remind us that even though there’s a lot of empty space out there, the Universe is also a pretty crowded place as well. That, after all, is a lot of galaxies. 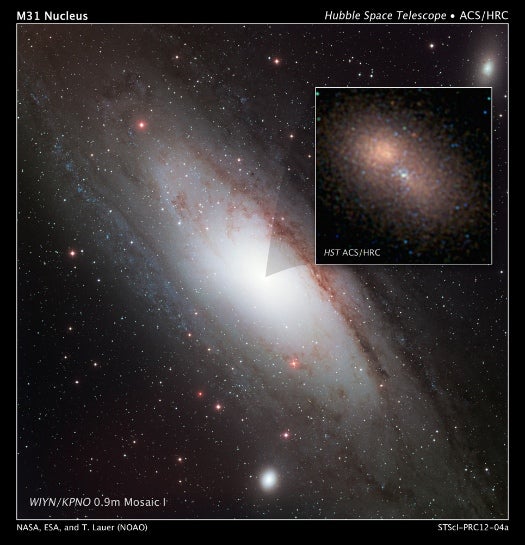 Andromeda is the closest giant galaxy to us and one of only a few visible to the naked eye from Earth. Its largeness coupled with its proximity makes it a particularly interesting astronomical target because of what we have here: the sharpest visible-light image ever made of the center of an external galaxy. By center, we mean black hole. The event horizon–that place beyond which light can no longer escape–is too small to be seen but is tucked within the cluster of blue stars in the center of the inset. The larger “double nucleus” of red stars results from those stars’ elliptical orbits around the black hole. When they are at the far ends of that orbit they move slower, giving the illusion of a nucleus on either side of the central black hole.
Deep Space
Space
Space Telescope
chandra x-ray observatory
gallery
space photos
spitzer
Telescopes