Seriously, you guys, this is a real story. The Japanese branch of popular American circle-of-grease manufacturer Domino’s has unveiled plans... 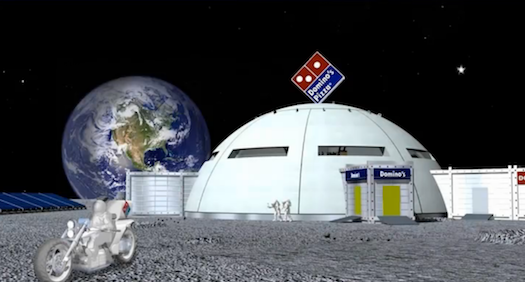 Seriously, you guys, this is a real story. The Japanese branch of popular American circle-of-grease manufacturer Domino’s has unveiled plans to build a dome-shaped Domino’s pizza on the moon. The moon. The artist’s rendering, above, features a drive-through which the Domino’s concept artist thinks you’ll be able to drive a space-motorcycle through.

Click to launch a guide to the new features of the Domino’s on the moon.

So, obvious first questions first, is this actually going to get made? No, because a spokesman for Domino’s estimates it’ll cost about ¥1.67 trillion–about $21.74 billion–to build, with about $7.3 billion required just to get the materials out to the moon. Of course, Domino’s does note that the plan calls for keeping costs down by making concrete out of “mineral deposits on the moon.” (Might we suggest using Enrico Dini’s moon-dust 3-D printer?) Another reason this won’t actually get made: the moon has a permanent resident population of zero. A Domino’s spokesperson says “we have not yet determined when the restaurant might open,” although “never” seems like a pretty fair guess.

But the plans are pretty cool: it would be a two-story dome with a diameter of 26 meters, with a ton of storage space and places to grow pizza-making ingredients with LED lights, since they can’t very well plant a garden out back and it’d get awfully expensive to rent a Soyuz or SpaceX rocket every time the kitchen needs a new bucket of sauce.

Theoretically, this is just a PR-friendly response to Pizza Hut’s 2001 space-delivery, but the Domino’s spokesperson insists the company is actually just thinking ahead. “In the future,” he said, “we anticipate there will be many people living on the moon, astronauts who are working there and, in the future, citizens of the moon.” 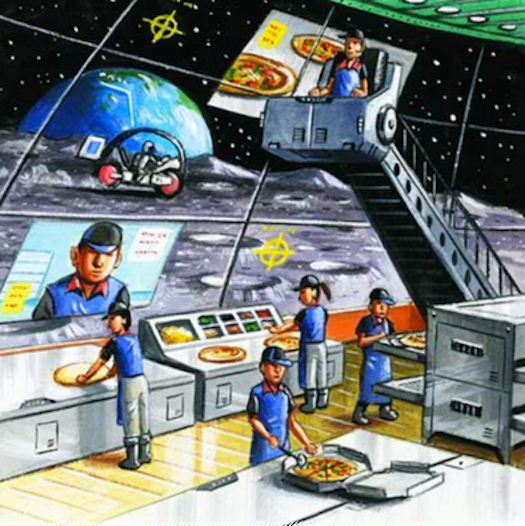 We asked a translator to tell us what the captions mean, but couldn’t quite figure out some of the finer details. For this particular image, here is a caption I just made up: The future kitchen of the Moon-Domino’s features excellent views of Earth (and is monitored by a manager driving the stair car from Arrested Development) but is otherwise about what you’d expect from a futuristic Domino’s kitchen. 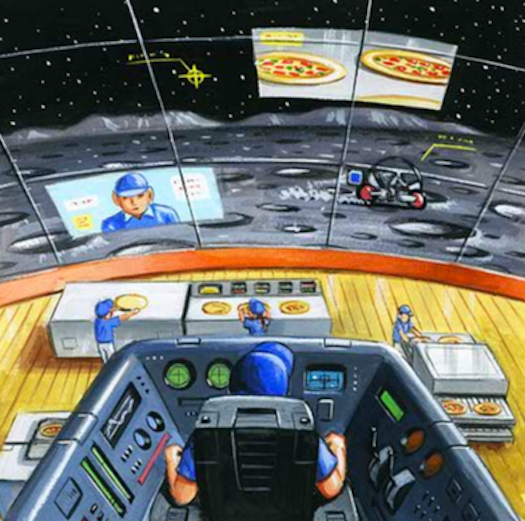 From his moon-chair in the Arrested Development stair car, the manager can view his or her employees toiling away on their space pizzas, as well as catch a glimpse of his delivery staff out on their moon-buggies. Our translator tells us that this chair also has a built-in massager, and that this is “the dream job” at Domino’s. 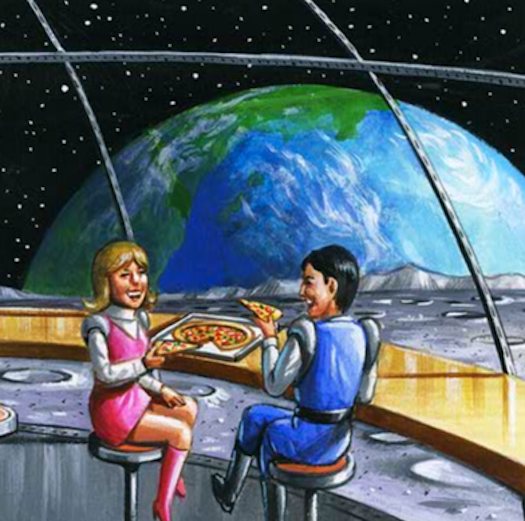 In this mockup, we can see two of the lesser-known characters on The Jetsons enjoying their moon pizza. Really enjoying it. A quote from our translator: “The best view is of the Earth. Why don’t you come and visit instead of ordering over the phone?” 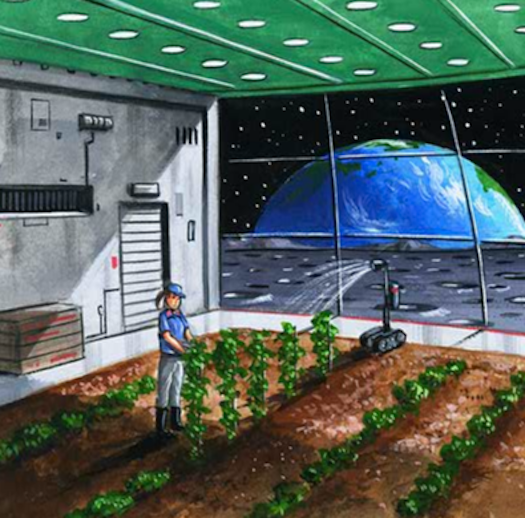 In this picture, we all pretend that Domino’s has any use for the kind of produce you might grow in a garden. 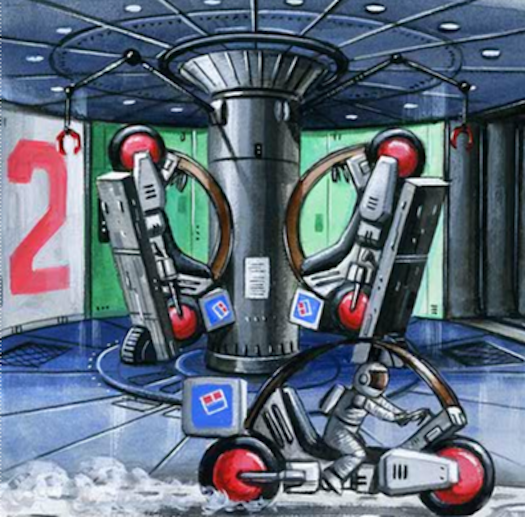 According to our translator, these moon-bikes will be used for delivery, and are equipped with gyroscopes so they can easily flip from horizontal to vertical orientation in the moon’s low gravity. 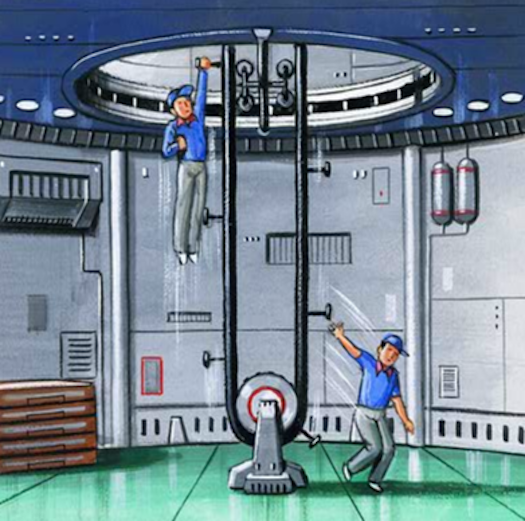 The Moon Version of a Fireman’s Pole

According to the crack mockup team at Domino’s, this lift will be easy to use in low-gravity environments like the moon–you can just grab on to move between floors. 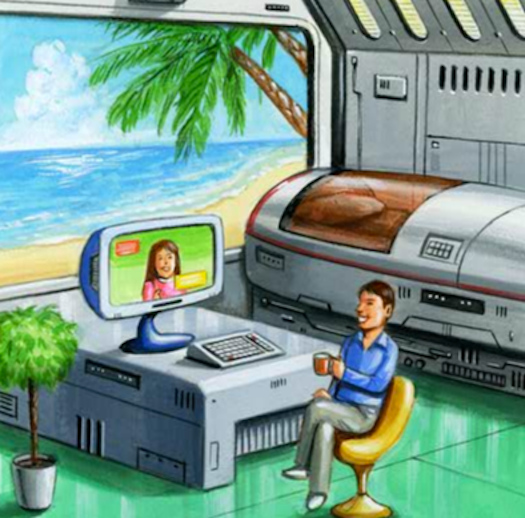 The Personal Space for Staff

According to our translator, this slide shows a staff’s potential personal room. Each staff member would have a private room, equipped with a capsule-style bed, a computer for video-chatting, and the ability to choose your own background. This employee has chosen a tropical beach scene. 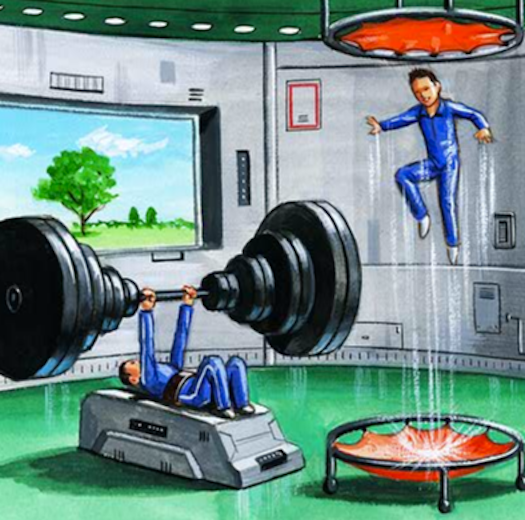 As we all know, muscles tend to atrophy in the low gravity environment of the moon, so it’s important to include a workout room. Interestingly, the Domino’s mockup artist has chosen to assume there will be no artificial gravity in the workout room, so people will have to lift ludicrous amounts of weight instead. That double-trampoline looks like a good/extremely dangerous time, though. 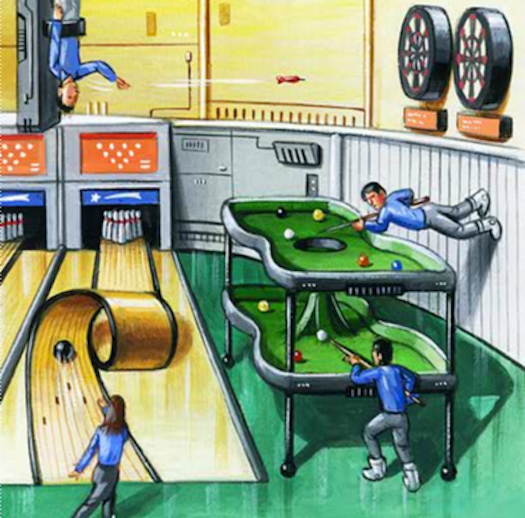 This is where the mockup artist really started having a good time. These are all moon-versions of typical Earth-activities, so the bowling lane has a loop-the-loop (challenging!), the pool table has multiple levels and is supposed to be played from several different surfaces, and the darts are upside-down because why would you even bother playing darts on the moon if they’re just regular darts? There are a couple problems though: Why are there no pockets on the pool table? Also, how is that dude standing on the wall while shooting from the top table? Velcro? 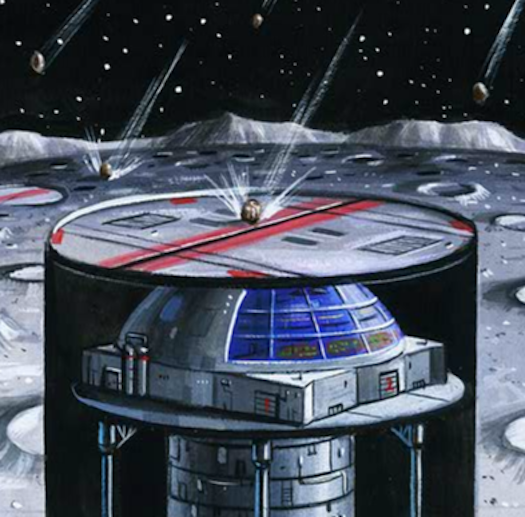 Our translator tells us this section is structured like a Q&A;, asking “What do you do if there are asteroids?” Apparently the shelter comes up around the restaurant to sheath it, closing over the top. This cuts off the views of Earth, but compared to getting smashed by an asteroid, it’s probably a decent option.
Moons
Solar System
Space
Asia
food