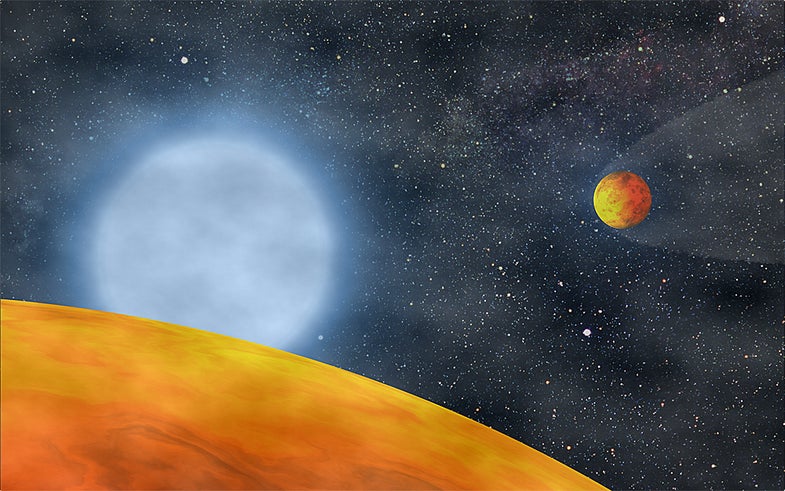 Two scorched planets, both smaller than Earth, survived being swallowed up by their star when it mushroomed into a red giant. Stéphane Charpinet/Institut de Recherche en Astrophysique et Planétologie
SHARE

Two more little Earth-sized planets have been discovered orbiting a distant star, astronomers said Wednesday, and their bizarre baked death may foreshadow the destiny of our own solar system. The publication comes a day after the announcement of the first Earth-sized planets ever confirmed outside our solar system. Already firmly in the exoplanet age, we’re apparently entering an era of exo-Earths, full of small worlds with a past and a future very much like our own.

These newest small worlds have been swallowed up by their bloated red giant of a star and lived to tell the tale. One planet is 0.76 times the radius of Earth and one is 0.87. (The planets announced on Tuesday are 1.03 and 0.87 Earth radii.) But they were probably much larger earlier in their lives, and lost much of their mass as they were engulfed in their dying star’s outer gas shell, researchers said.

“If a tiny planet like the Earth spends 1 billion years in an environment like that, it will just evaporate,” Elizabeth ‘Betsy’ Green, an associate astronomer at the University of Arizona who participated in the research, said in a UA news release. “Only planets with masses very much larger than the Earth, like Jupiter or Saturn, could possibly survive.”

Astronomers think the planets might have played a role in the star’s own death, too, by stripping away its outer layers of diffuse gas. “During that episode, the planets may have been stripped down, losing their gaseous layers and being left only with their inner rocky/iron cores, which would be exposed,” the authors write.

The star, known as KIC 05807616, shrunk back down about 18 million years ago and is now considered a hot B subdwarf. The Kepler Space Telescope has been observing it because of its pulsating oscillations, which are interesting to astrophysicists. The star has an exposed core and asteroseismologists are studying the pulsations to examine its interior structure.

While analyzing stellar data, lead author Stéphane Charpinet of the Astrophysics and Planetary Research Institute in Toulouse, France, noticed two tiny variations, repeated in 5.76- and 8.23-hour intervals. Other astronomers checked it out and found the same thing. These regular pulses suggested two small planets orbiting very close to their star. Based on the parameters of the star and these light curve dips, the planets, dubbed KOI 55.01 and KOI 55.02, are the smallest yet discovered orbiting around a still-living star.

On Tuesday, astronomers using NASA’s Kepler Space Telescope announced they had published findings on the first two truly Earth-sized planets, one just a tad bigger than Earth and one just about the size of Venus. Those planets also orbit pretty tightly, although not as much as these new ones.

The consumed planets may have started out much larger than Earth, but their continued survival suggests not all will be lost when our own sun bloats into a red giant about 5 billion years from now. When it swallows the planets, there may be some remnants left over — not of Earth, unfortunately, but maybe the gas giants, if the sun bloats a whole lot. Somewhat comforting news.

The paper is published online today in the journal Nature.