For the First Time, Researchers Use an Atom Interferometer to Measure Aircraft Acceleration

Atom interferometers are neat little devices that exploit the wave characters of atoms to make highly precise measurements of things... 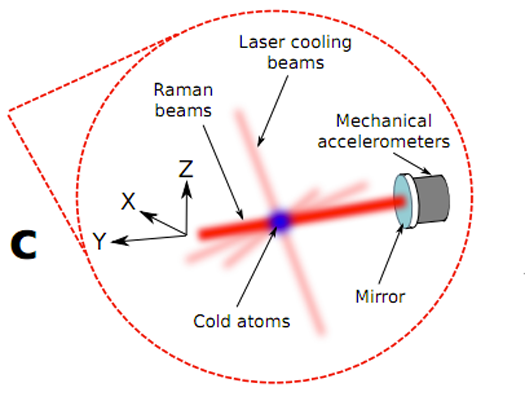 Atom interferometers are neat little devices that exploit the wave characters of atoms to make highly precise measurements of things like distance and or the force of gravity. But because they are fickle by nature–even the smallest vibrations distort their results–atom interferometers have been mostly limited to highly controlled experiments that take place in either underground labs or in free-falling zero-g experiments. But a team of French researchers has announced today the first use of an atom interferometer to measure the acceleration of an airplane.

This is useful because atom interferometers are super sensitive, more so than the inertial sensors used widely on modern aircraft. Those inertial sensors have been known to fail with potentially disastrous results, but more frequently they cause slight errors to creep into navigation systems that must later be corrected. With no moving parts and a high degree of accuracy, atom interferometers could mitigate these problems, recording inertial effects 300 times weaker than the normal fluctuations in the acceleration in a standard aircraft.

But the vibrations in an aircraft have previously made deployment of atom interferometers in planes unfeasible. That’s where Remi Geiger at the Laboratoire Charles Fabry in Paris comes in. He and his colleagues have created a system that compensates for the effects of vibrations via mechanical accelerometers that record the movements of the aircraft itself.

Using that vibration data, their system recalculates the interferometer’s data to compensate for any vibration that might be skewing its final result. By stripping out the vibration noise, they end up with a clean, high-resolution atom interferometer result. The system could go a long way toward delivering better acceleration data to the cockpits of large jets. Geiger and company have already tested their system successfully on an Airbus A300.

But an atom interferometer that can operate free of laboratory constraints isn’t limited to jetliner applications. The researchers hope their method will lead to more precise measurements of geodesy and of gravity itself, enabling some fundamental experiments that have been previously very difficult to conduct and challenging some existing principles of physics with more and better data. More at arXiv.