This Airbus prototype could deploy drones from cargo planes

The UAV would launch off the cargo ramp of a turboprop transport craft—and play a role in battles of the future. 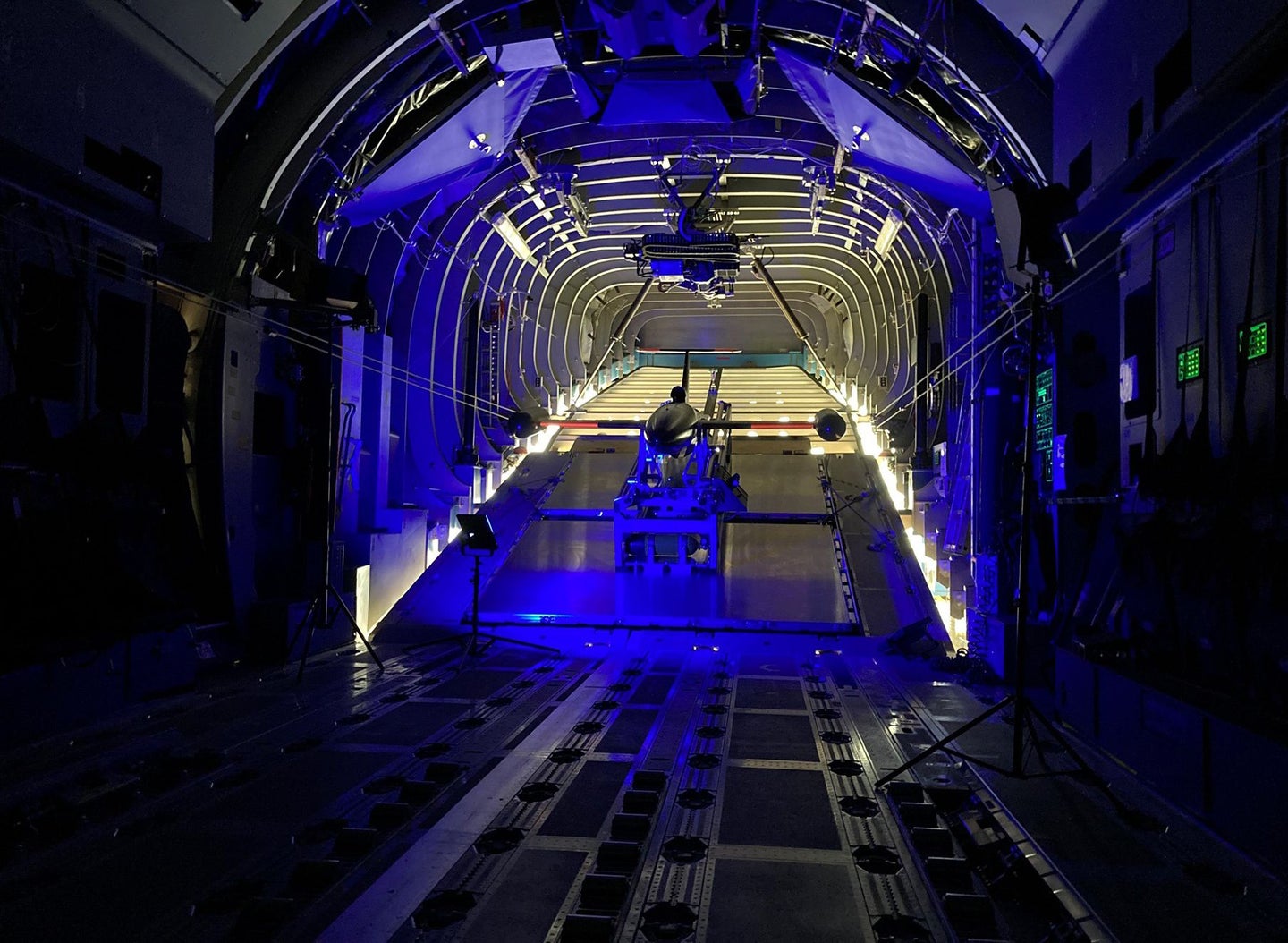 A view of the launcher, and drone, in the back of the aircraft. Airbus
SHARE

For a small aircraft, any stretch of open sky can become a runway, if another plane is able to carry it to altitude first. On December 9, 2020, Airbus revealed a prototype of an airborne launcher that is designed to carefully release uncrewed aerial vehicles, or drones, from the loading ramp of a cargo aircraft into the sky while in flight.

This launcher is built to go in an Airbus A400M, a four-engined turboprop transport that entered service with France in 2013, and has since been adopted by other nation’s militaries. The plane has a range of 2,100 miles with a full payload just shy of 82,000 pounds, but can go further if it carries less weight.

In an announcement video, Airbus showed an aerial target drone inside an A400M. Aerial target drones are affordably built, and used as a type of robotic clay pigeon for fighter jets and anti-air missiles. The low cost of target drones has made them a useful starting point for designing useful, expendable military drones—ones that fit the dimensions for launch from the back of a cargo plane, but carry useful sensors or weapons needed to perform a military mission.

Given the wingspan constraints imposed by the width of the actual cargo hold, the drone is a good approximation for the size and range of any plane-launched flying robot. An Airbus aerial target drone like a DO-DT-25R (a catchy name, to be sure) can fly for about 60 miles. Putting it inside a carrier with the range of the turboprop in question extends that range by two orders of magnitude. It gives militaries a tremendous range of possibility when it comes to using drones for war.

“Imagine a future combat scenario where multiple remote carriers are required in the first days of a future combat,” Andreas Heckmann, the project lead on the launcher at Airbus, said in a video about the prototype. “And you have an A400M in almost all European nations, and you could launch UAVS, remote carriers in this case, from the transport aircraft, and later on multiple UAVs.”

The news begs the question: What kind of scenario calls for planes that can launch other planes? It’s a topic that designers have pondered for nearly a century, dating back at least to the 1930s and airship-mounted escort biplanes (a real thing the US Navy built and tested). The most immediate reason to put smaller planes on a bigger plane is to protect those bigger aircraft from enemy fighters. The XF-85 Goblin, which Popular Science covered in December 1948, was a tiny human-piloted jet, built to ride in the belly of a massive B-36 nuke-carrying bomber, and then be released to protect the bomber from enemy air-to-air fighters.

Two developments beyond the design of the Goblin itself doomed the concept. The first was that fighter jet design got better, making a dedicated bomber-mounted escort irrelevant. The second, and far more important, was that anti-air missiles became the main risk to bombers, with a range and speed that an escort fighter could do little about.

The persistent dominance of missile-based anti-air weapons from the Cold War to today is now bringing plane-launched drones back into consideration. Drones have a few advantages over human-piloted craft dropped by planes. The first is that they are expendable, both in terms of material cost and also because they do not risk the life of an on-board pilot to operate.

In the United States, DARPA, the Pentagon’s blue-sky projects wing, has tried to answer this question for the better part of a decade. The signature program is Gremlins, which has also completed not just aerial launch of drones, but aerial recovery of drones. More recently, DARPA announced the LongShot project, which involves air-launched drones that would themselves be able to fight with air-to-air weapons.

These flying robots could be part of how aircraft get around anti-air missiles. Transport aircraft could send many armed, relatively cheap drones to attack anti-air missile installations, destroying the weapons and the people crewing them. With that path cleared, other aircraft could move in and attack other military installations. It could also clear a path for transport aircraft to land, unloading humans and vehicles and cargo that could then fight on the ground.

Answering the threat of anti-air missiles is just one possible use for plane-launched more-expendable drones. In more peacetime settings, transports that could launch durable scout aircraft could fly to the site of a natural disaster, and then use the drone to see if there is a viable landing area below.

The Airbus prototype opens the possibility for plane-launched planes to play a greater role in the wars of the future. Provided, of course, the prototype actually works as promised.

Watch a video about it, below.