Pirates Of The Near Future Will Use Drones

Canadian military journal says it's only a matter of time 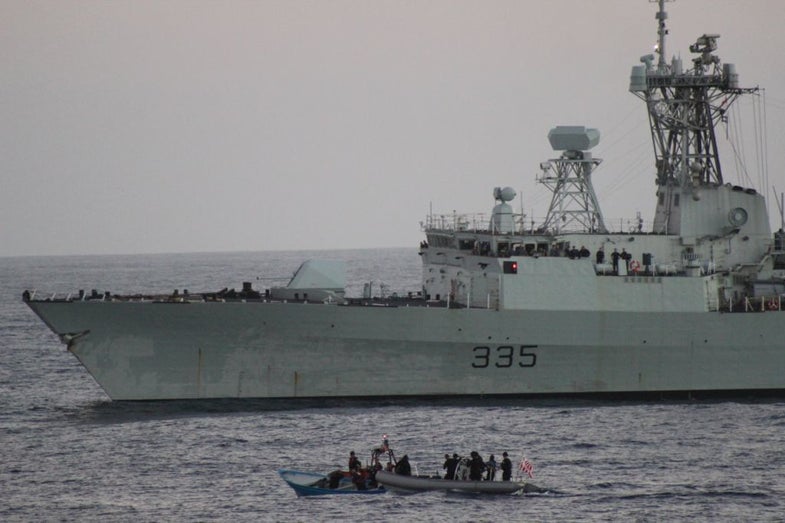 But drones —small, commercially available flying unmanned aerial vehicles— are suddenly giving wings to whole swaths of new maritime threats. A paper published in the Journal of Military and Strategic Studies (h/t: Motherboard) gives us a weird vision of our future present: drones, except operated by pirates.

“Maritime Non-state Actors: A Challenge for the Royal Canadian Navy?” by David Rudd, offers a glimpse into this strange new waterworld.

Historically, piracy has always been a close-quarters affair, with ship-borne guns threatening vessels or smaller craft landing heavily armed boarding parties to hold crew and cargo hostage while demanding ransom. Adding drones to small boats could give pirates a new way to attack.

Here’s how Rudd describes a hypothetical threat from an ISIS-like actor:

A handful of non-state actors (usually insurgents or terrorist groups) have had air forces, but they are staggeringly rare. Because small drones require nothing more than a handful of dollars, and even modest drones can launch from ships and land in nets, drones employed by pirates or other non-governmental groups are entirely possible, and maybe even plausible as a risk.

Yet what makes the threat meaningful is not so much the drones but the groups doing it. While maritime terrorists attacks may be relatively new, piracy predates drones, and it will exist so long as there is profit to be mad doing crime at sea. The rest of Rudd’s study focuses on how to counter this old threat employing tech, and much of it focuses on fairly familiar options: law enforcement patrol ships, potent enough to fight criminals without the heavy firepower required for naval battles. Then there’s the lasers.

Lasers, while expensive to develop, are pretty good at melting drones and small boats. If the future of piracy is drones, it only makes sense that the future of the coast guard will use actual freakin’ laser beams.