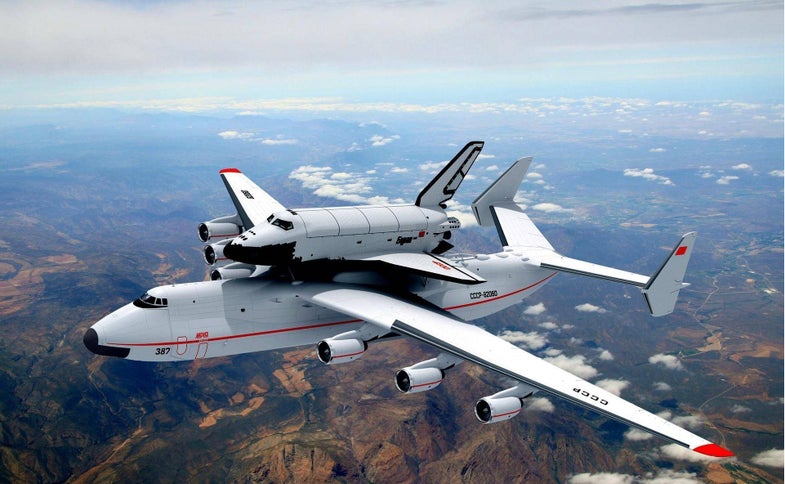 The An-225's large size was the result of its initial mission to transport the massive Soviet Buran space shuttle, which could weigh up to 105 tons, to launch. Unrealized Soviet planes also intended for the An-225 to launch other reusable space launch systems in mid air. Antonov
SHARE 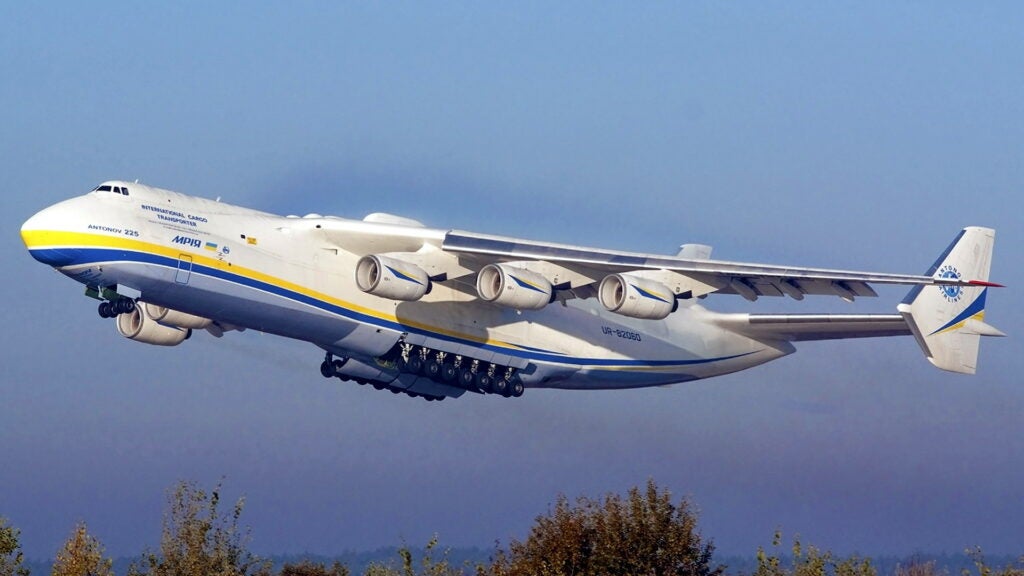 The An-225, which can carry 250 tons of cargo, is the world’s heaviest aircraft. China buying and building An-225s would exponentially increase its power projection capabilities not just in Asia, but across the world.

On August 30, members of the Aviation Industry Corporation of China (AICC) and the Antonov Corporation, the leading Ukrainian aviation company, signed an agreement to restart production of the AN-225, the world’s largest cargo plane. 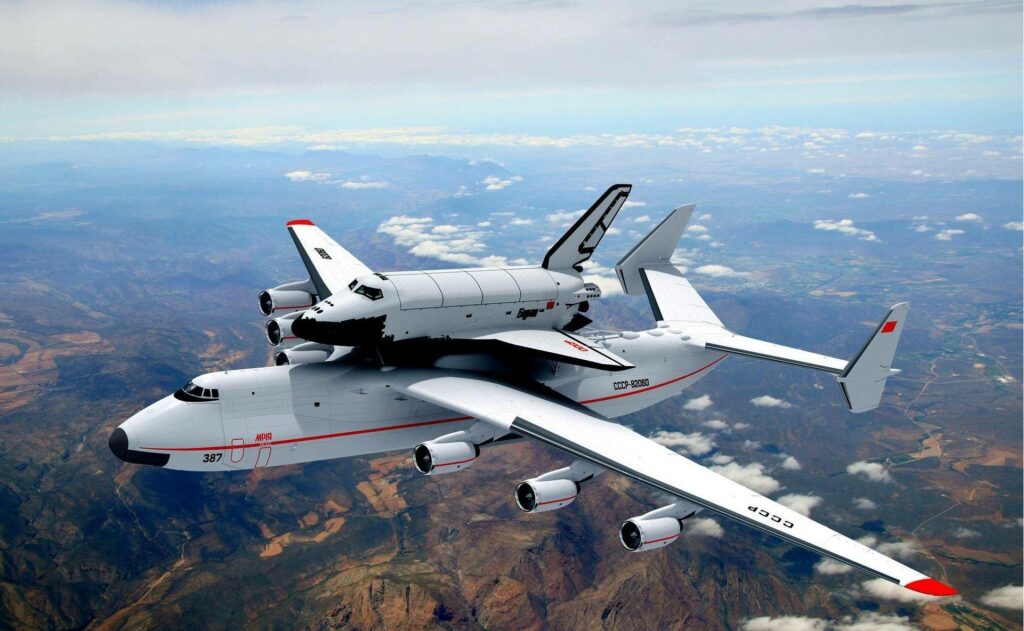 The An-225’s large size was the result of its initial mission to transport the massive Soviet Buran space shuttle, which could weigh up to 105 tons, to launch. Unrealized Soviet planes also intended for the An-225 to launch other reusable space launch systems in mid air.

The 640 ton, six engine An-225 is the world’s largest aircraft. Measuring at 84 meters in length and a wingspan of over 88 meters, it carries a world record payload of 250 tons (to put this into comparison, it can carry around 300,000 lbs more than the US military’s Boeing made C-17). The sole operational An-225 began flying in 1988, initially carrying the Soviet Buran, a 105 ton reusable spaceplane, on its back. It was put into storage after the Soviet collapse, but restored and put into commercial service in 2002. Since then it has been rented out, flying super heavy cargos like gas and wind turbines, as well as military supplies for NATO forces in the Middle East. 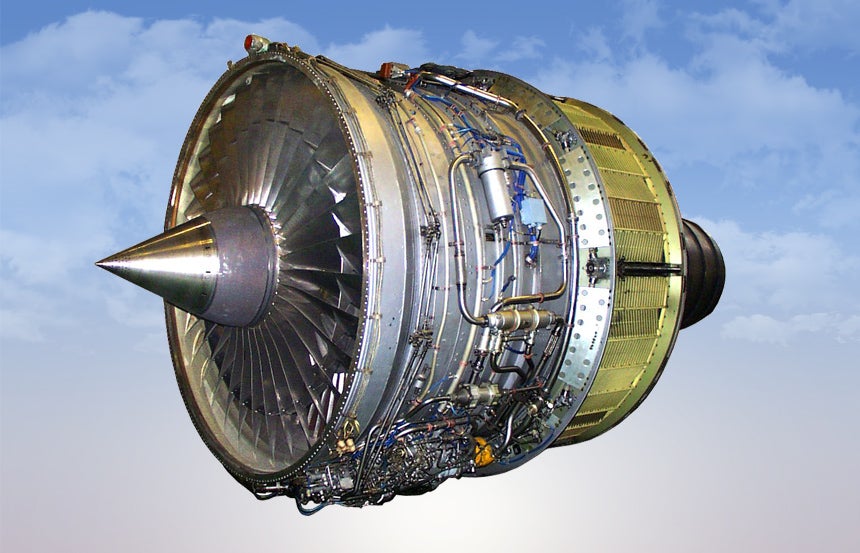 The powerful Ivchenko Progress D-18T turbofan, which produces 23 tons of thrust, will also be license produced by China to power domestically built An-225, and possibly other Chinese heavy transport aircraft.

The first phase of the agreement between AICC and Antonov will result in the completion and flight of the incomplete second An-225 in 2019. The second stage of the project will involve the complete transfer of technology, including the 23 ton thrust Progress D-18T turbofan engines, to China, for licensed production of a modernized version in Sichuan Province.

3325 is the first of China’s domestically built Zubr armed hovercraft, commissioned in early 2014. Weighing over 400 tons fully loaded, it can carry three battle tanks or company of armed soldiers.

Despite China’s close relationship with Russia, Ukraine’s rival, China has purchased outright and licensed a number of Ukrainian aviation and naval platforms, such as the ex Varyag aircraft carrier, the Zubr hovercraft and the An-178. Antonov itself has also provided design and technical advice for the Chinese ARJ-21 region jetliner and Y-20 heavy transport aircraft. 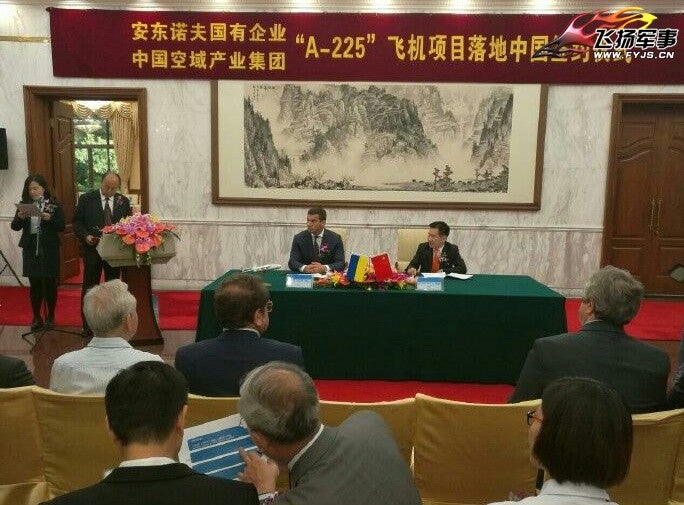 The official announcement and signing of the understanding to restart the An-225 production line was given high support by the Chinese government, despite the official Chinese partner, AICC, being relatively undersized compared to the AVIC industrial giant.

With the ceremony signed in the Diaoyu state guesthouse in Beijing, and presence of senior government officials, it is clear that there is strong government support for China for this deal. While AICC itself is a relatively small company, it could leverage its government connections to draw heavily on aviation giant AVIC’s extensive Sichuan production base. 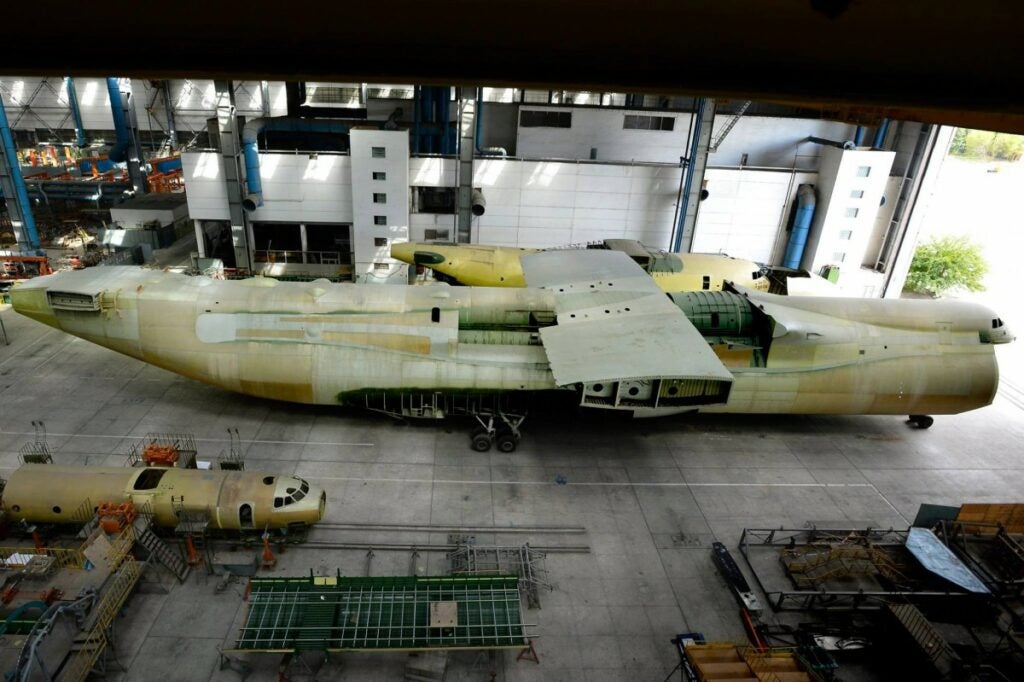 With much of the fuselage structurally complete, the second An-225 will have its wings, engines and avionics integrated on in the next three years before being handed over to China in 2019. Compared to the first An-225, it has a rear mounted cargo door and single tail, suggesting a greater emphasis on transporting internal cargo, compared to its Buran space shuttle carrying older brother.

Finishing the second An-225 by 2019 is an achievable goal, given that the airframe is already 60-70 percent complete. AICC will likely provide the majority of $300 million needed to complete the aircraft. Assuming that the second phase of the deal is completed, a completely Chinese version of the An-225 could begin first flights in the mid 2020s. 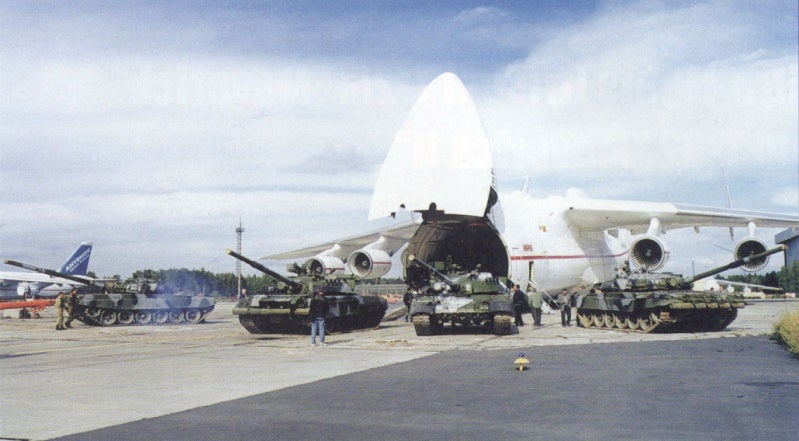 Belly of the Mriya

In addition to carrying space shuttles, the An-225 could carry multiple tanks, such as these four main battle tanks. A Chinese An-225 could not only carry a platoon of China’s latest heavy tanks, but also other military cargo like missile launchers and heavy artillery.

For China, the An-225 would open whole new frontiers in commercial and military air transportation. A fleet of civilian An-225s could quickly ship heavy and bulky cargoes of massive scale, ranging from construction equipment to consumer goods. For humanitarian purposes, the An-225 could support disaster relief operations, able to fly in not just large amounts of aid, but also by bringing infrastructure like power generation and water treatment that are normally too big for airlift.

On the military front, the An-225 would provide China with the kind of large and global lift that not even the US has possessed, except by rental. The plane is large enough to carry helicopters, tanks, artillery and ballistic missiles to anywhere in the world, or even other aircraft like smaller fighter jets. The An-225’s unparalleled payload could even make it a space launch platform, or the ultimate mothership for drone operations. In many ways, China’s build up of global airlift capabilities mirrors the immense gains it has made in global sealift, investing deeply to reach across the globe in coming year.

China’s Most Powerful Aircraft Engine Ever Takes to the Skies