The 2021 Super Bowl flyover was unlike any other. 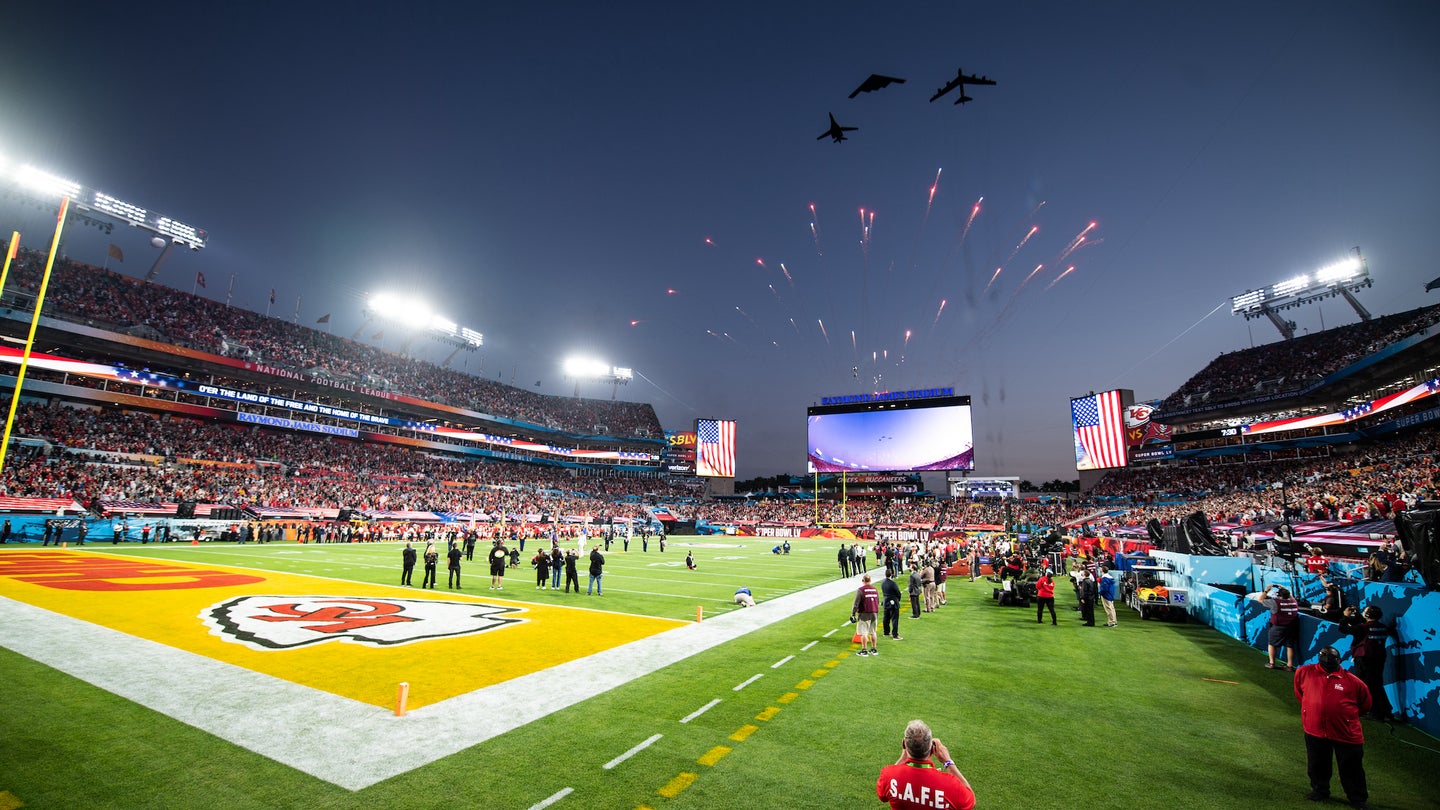 This story has been updated. It was first published on February 5, 2021.

On Sunday evening, just as the last notes sounded on the National Anthem at Super Bowl LV, three U.S. Air Force planes roared over the stadium in Tampa, Florida. It was a trio of bombers. That represents a change from recent years that saw smaller craft, such as the F-16s of the Thunderbirds, streaking overhead.

More specifically, the triad was a B-1, B-2, and a B-52, with the B-2 Spirit leading the way. Anyone in the stadium or watching on television had the chance to glimpse a trifecta of planes that represent technology that’s both old and relatively modern. The three planes reveal what the U.S. bomber fleet is like now, as well as offer a preview of what the future holds.

“The most striking thing of seeing those three aircraft together, is that it represents three different generations of bombers, all at once—and it’s a dramatic difference in capabilities,” reflects Todd Harrison, who directs the Aerospace Security Project at the Center for Strategic and International Studies (CSIS).

Here’s what to know about each aircraft, and the role each plays in U.S. defense.

The B-1B bomber: Speedy but stressed out

The B-1B, also called the Lancer, sports a fun nickname: the Bone. It earned that thanks to the way its name looks written out: “B-one.” Of the three bombers in the fleet, it’s uniquely capable of pulling off tricks the others cannot. It can hit supersonic speeds, fly inverted, and its wings can change their position as it operates, depending on what the craft is doing.

“It’s very precise when you turn it,” says Capt. Abraham Morland, a B-1B instructor pilot and the aviator who flew it over the Super Bowl. “It’s easy to maneuver the jet—so it’s a lot like a fighter.” (While the Bone can pull some 3 Gs in combat, that’s much less than the 9 Gs an ultra-agile craft like an F-16 can execute.)

The pilot can control the position of the wings, which sweep forward or back. For lower speeds, and to maximize lift, the wings are moved forward, and for faster speeds and more tactical maneuvers, they’d be angled backwards. At takeoff, for example, the wings would be swept back by 15 or 20 degrees, and then when it’s cruising, they’d be angled back by 25 degrees. “When we get into our tactical scenarios, we will pull the wings back to 45 degree wing sweep and further back,” Morland says.

Generally, the B-1 fleet has been overtaxed, and the Air Force would eventually like to phase it out. “We overextended the B-1 in the fight on terror,” General Timothy Ray, who leads Air Force Global Strike Command, told me when I visited Barksdale Air Force Base in Louisiana last March. The Air Force has 62 of them, and had wanted to reduce that number to 45, but the most recent National Defense Authorization Act put the kibosh on that plan. The number remains at 62.

Harrison, of CSIS, echoes Ray’s assessment. “In operations in Afghanistan, the operational tempo—the number of flying hours per year of the B-1 fleet—went up significantly, and so did the accident rate,” he says. “That’s since come down.”

While the B-1 is known for its large bomb payload capability as well as the ability to fly faster than the speed of sound, there’s one thing it can’t do: carry nuclear weapons. That’s because of a U.S. agreement with Russia called New START.

The B-2 bomber: Stealthy but small in number

Also streaking over the Super Bowl was the B-2 Spirit, which resembles something like a flying triangle. A stealth aircraft, it can’t be seen by radar, but your eyes are definitely able to spot it.

It’s more airliner-like in the way it flies compared to the maneuverability of the Bone. “The B-2 is a 2-G aircraft; generally we won’t exceed 30 degrees of bank,” he says, referring to how much it tilts when it turns.

The G-rating of an aircraft represents a measure of how much stress it and the pilots on board experience: An airplane flying level and at a constant speed feels one G—the G representing the standard force of gravity—pulling it down. When the aircraft turns hard, or pulls its nose up fast and decisively, that increases the amount of Gs the craft and the people on board feel. Two Gs, for example, is twice the force of gravity.

All three of the bombers are capable of mid-air refueling, meaning that they are able to fly for a very long time. For example, a B-2 could take off from Missouri and then fly to Afghanistan and back. “We call those long-duration missions,” Mascaro says. “Those can be up to 36-hours long—I think the longest one we flew in 2001 was just over 40 hours.”

“There’s an entire process that we go through to prepare two pilots to execute a sortie like that,” he adds. The aircraft will be refueled around five times as it flies, and the pilots will take turns sleeping. “On a long sortie like that, you mission-plan your sleep schedule.” There’s a toilet on board, positioned behind the right-hand pilot’s seat.

[Related: The world’s longest commercial flights, by the numbers]

The B-2 fleet is small, CSIS’s Harrison notes: There are just 20, although one is “always kept aside for testing purposes,” he says. Because they evade radar, they are a typical initial choice at the beginning of a conflict, like in Iraq, Afghanistan, or Libya. “It flies these missions, oftentimes, right out of its home base in Missouri,” Harrison notes.

The B-52 bomber: Old but still flying

Finally, the B-52 is by the oldest plane of the gang. It’s called the Stratofortress, but thanks to its Jurassic age, it’s also known as the Stratosaurus. The more concise nickname is the BUFF, which stands for Big Ugly Fat Fellow, although you can imagine what word can be substituted for “fellow.”

If the B-1 is maneuverable and precise, and the B-2 is smooth and joyful, the B-52 is different in its handling. Controlling it is “like wrestling,” one of its pilots told me last year. Each BUFF has eight engines, which are eventually going to be replaced with newer thrusters.

The aircraft is also able to conduct missions in which it stays aloft for an insanely long time. Mascaro, the B-2 instructor pilot, says he once endured a training flight that lasted an absurd 43.3 hours long on a BUFF. It flew out of Louisiana, went to Australia, and then returned, like the world’s biggest, most menacing boomerang.

Eventually, a new stealth bomber, called the B-21 Raider, will debut. As B-1s and B-2s are phased out, the future bomber fleet may eventually just be old BUFFs and new B-21s. Hillary Clinton even highlighted that bomber in a recent article in Foreign Affairs, noting that the Air Force “should welcome the arrival of the B-21 Raider, a long-range bomber under development that is designed to thwart advanced air defenses.”

Harrison notes that the Raider is “not really a controversial aircraft—there’s been pretty wide bipartisan support for it.” But of course, it wasn’t at Super Bowl LV: It may fly for the first time in December of this year, according to DefenseNews.

Check out a video of the flyover, below.

Aviation
Military
Aviation News
B-1
B-2
B-52
bomber