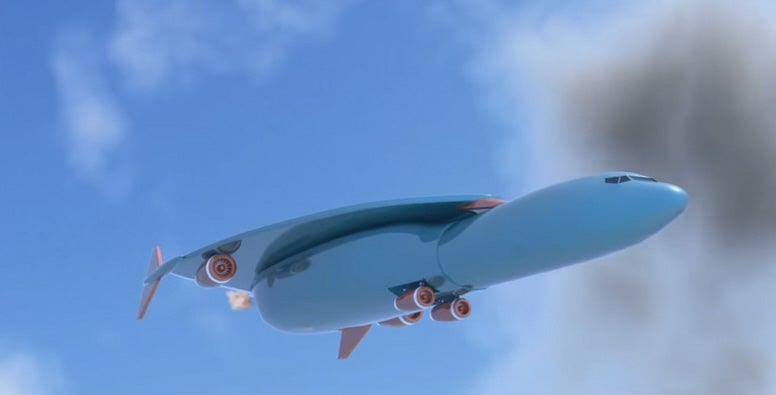 Crossing the Atlantic used to take months, but a new patent for Airbus for a hypersonic jet airliner wants to reduce that time to under five hours. Granted in the middle of last month, the patent –“Ultra Rapid Air Vehicle and Related Method for Aerial Locomotion“– describes the outline of a plane powered by turbojets, ramjets, and a freakin’ rocket, all designed to help propel either 2 or 3 tons of cargo or 20 passengers at speeds of up to Mach 4.5, over distances of roughly 5,600 miles in three hours.

History has seen supersonic airliners before. Airbus’ patent mentions both the British Concorde, which operated from the 1970s to 2003, and Russia’s briefly flown Tupolev Tu-144. Both of these planes exceeded Mach 2, and both had their fair share of problems: on July 25th 2000, a Concorde airliner crashed, killing all 113 on board. The Tupolev Tu-144 crashed at its 1973 Paris Air Show debut, and had a wretched safety record after that.

Plane design has come a long way since the Cold War. Besides the poor safety record of the Tu-144, the other major obstacle to supersonic airliners was the sound–the United Kingdom even produced an anti-Concorde movement called “Citizens League Against The Sonic Boom” which was opposed to the plane. Indeed, when the Concorde operated, it flew primarily across the uninhabited seas. The hypersonic Airbus makes the leap from subsonic to supersonic speeds vertically, while climbing like a rocket, which should dissipate the sound before it reaches the ground.

In fact, the plane is perhaps best thought of not as an airliner, but as a suborbital rocket. We’ve seen some tentative designs like this before, as military vehicles taking marines into space and then back down again. Turbojets on the belly of the vehicle get the plane moving, but rocket power takes it vertical to its cruising altitude as the jets retract into the plane’s belly. Once high up, the ramjets take over, pulling the craft along at high speeds before it descends down.

The patent was spotted by YouTube user PatentYogi, who has a video complete with a rendering that helps to explain how the plane could work. Watch it below: