Boeing Patented A Drone That Flies, Submerges, And Swims

More than meets the eye 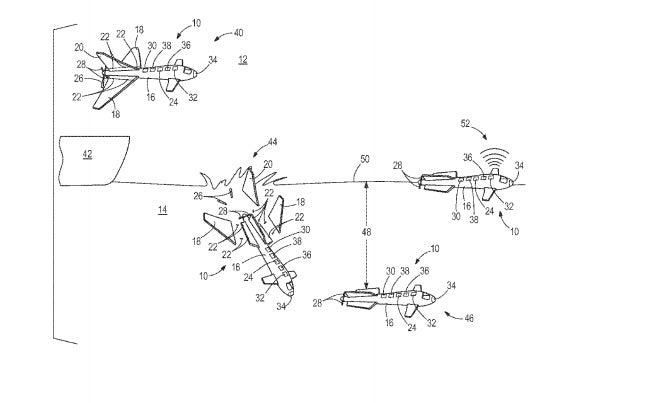 For the Navy, flying robots just aren’t enough anymore. To truly fulfill the maritime combat branch’s mission, designers are making unmanned flying machines that can land on the sea and swim beneath it. The imposingly named “Flimmer“, created by the Naval Research Laboratory, is one such robot, with flippers on the ends of its wings that fold up for flight. It turns out Flimmer isn’t the only transforming drone in the works. Boeing was granted a patent for a “Rapid Deployment Air And Water Vehicle,” or, a drone that flies and then swims.

From the patent, it appears that Boeing’s transforming drone makes the metamorphosis just one way: think more like a caterpillar to butterfly, not reconfigurable Optimus Prime. It flies through the air with a pusher propeller and a winged body. Then, when it enters the body of water, it sheds the wings like an insect molting into a new form. New control surfaces, like fins or rudders, can now steer the robot, and in place of the propeller it may use instead a water-specific rotor (though still using the same engine as the aerial propeller). The vehicle may then travel underwater for some time, before returning the surface to transmit information, presumably recorded by sensors added later in the design process, back to the user that launched it.

Why go through all the trouble of a transforming drone? One good reason is that it’s much faster to fly through the air than travel entirely under the sea. Another use would be avoiding harbor defenses, by first flying over underwater nets and then swimming under areas guarded by anti-aircraft weapons. Depending on the sensors a vehicle like this could carry, it might use sonar to find underwater mines, protecting manned vessels, or just cameras, documenting activity in an area that’s otherwise hard to access.

While it doesn’t appear to have a way to resume flight once it’s landed in water, if built cheaply enough it may not need to, instead functioning as a one-use disposable scout and underwater spy.