Inside a training mission with a B-52 bomber, the aircraft that will not die

Over the next decades, the US fleet will be both old-school and futuristic. Here's what's happening. 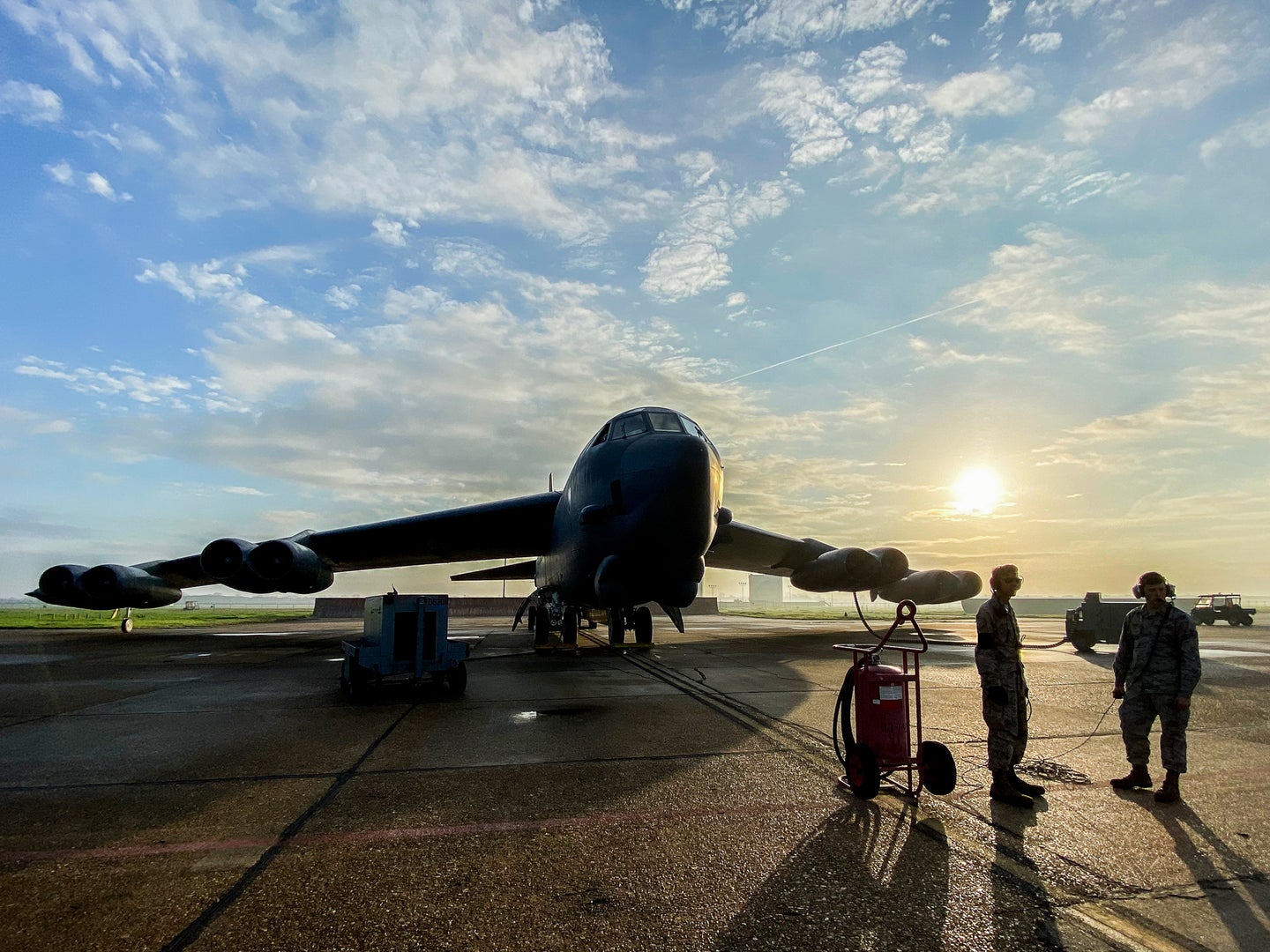 The B-52H aircraft the morning of the flight. Its serial number is 61-0010, meaning that Congress appropriated the money to build it in 1961, according to Boeing. The only B-52s the Air Force flies today are the H models, which are the youngest. Rob Verger
SHARE

Just before 9 a.m. on a blue-sky Louisiana morning, a giant gray B-52 bomber gradually lifts off the tarmac with some 190,000 pounds of fuel on board, a trail of dark exhaust behind it.

A few seconds later, there’s a small glitch: One of the aircraft’s landing gear legs—the rear one on the left—decides to stay down. The rest fold up, as they should. The pilots determine that the problem isn’t big enough to scrub the day’s flight, so the bomber pushes on with its training mission, two big wheels hanging down for five hours like an incomplete thought, limiting the plane’s speed and reducing its fuel efficiency. At some point, as planned, the crew refuels from behind an airborne tanker, taking on thousands of more pounds of gas.

That’s the B-52—a beefy old bomber that dates back to the post-World War II years. Though the US military has incorporated sleeker flying machines in recent decades, it’s not retiring what’s known as the “BUFF,” or Big Ugly Fat Fucker, anytime soon. The aircraft that lifted off that March morning from Barksdale Air Force Base in northwestern Louisiana was built by Boeing in Wichita, Kansas, and delivered to the Air Force in early March of 1962. The Cold War-era ship is far older than its two pilots that day: Carlos Espino (call sign “Loko”), 27, and Clint Scott (call sign “Silver”), 34.

Operating the B-52 is like “flying a museum,” Espino says from the left-hand seat in the cockpit just before the mission. “It’s a brick—I would say it’s like wrestling.” He’s a friendly, burly guy, and his squadron, the 20th, are known as the Buccaneers. The patch on his right shoulder shows a pirate throwing a bomb.

“It has a lot of redundant systems,” Espino adds. “So if one system fails, there’s plenty of other systems to back it up.” The most challenging maneuver, he says, is precisely lining the aircraft up with a tanker in the sky to accept more fuel. “At the end of air refueling, you’re literally sweating.”

The plane may be large—its 185-foot wingspan and 159-foot length make it bigger than a 737, and smaller than a 747—but the space for the crew is cozy. Behind and below the cockpit is a small submarine-like compartment, sometimes illuminated in red, where two others sit: radar navigator Rebecca “Ripper” Ronkainen, and aircraft navigator Jacob Tejada, both 28. If anything happens that requires an airborne evacuation from the jet, Ronkainen and Tejada’s ejection seats blast downwards rather than upwards, which is only safe if the plane is more than 250 feet off the deck. Also on board that day is an instructor and weapons systems officer, call sign “Pibber.”

Right behind where Tejada and Ripper work is a urinal. Ideally, no one poops on a B-52, even if the mission drags on for hours. Imodium can help.

Officially called the Stratofortress, or less officially, the Stratosaurus, the B-52 sports a wealth of engines hanging from its big wings. While most airliners rely on two or four engines, the BUFF has eight TF-33 turbofan thrusters. The Air Force is set to replace those engines with new ones, an improvement that could boost the jet’s efficiency by at least 20 percent.

Upgrades like that should help the B-52 fit in a little better with the Air Force’s more modern lineup. Many of the bombers have also been outfitted with a new digital system, though the craft’s cockpit is still very much awash in traditional analog dials. Plus, each BUFF goes through an exhaustive maintenance process every four years that involves some 40,000 hours of labor and around 3,000 swapped parts. The Air Force says it would like to keep the BUFF flying until 2050; it’s a plane they keep investing in because they have it, and because it can do, and has done, a lot.

B is for bomber

“The B-52 has been a workhorse of the Air Force for decades,” says Todd Harrison, who directs the Aerospace Security Project at the Center for Strategic and International Studies (CSIS). “It’s a remarkable aircraft, and I think it has really proven out the concept that your major platforms can stay relevant, long after their design life, by upgrading the components and the technologies that go on them.”

What makes the BUFF so enduring is the way it was first designed, says General Timothy Ray, the head of Air Force Global Strike Command. When they built the B-52 in the early 1960s, “you could do some precision engineering and precision manufacturing, but back then the efficiency wasn’t the driver,” he explains. “Today, you have the technical means to plan and manufacture to the finest of requirements.” In other words, they don’t build bombers like they used to.

Ray also notes that there’s more than one way to measure a plane’s age. “When you look at the life remaining in the air frame, the B-52 is the youngest,” he says.

Over the next decades, the Air Force might slim its bomber fleet down to just the futuristic B-21s and the old-school B-52s. Ray describes a fleet on the order of 75 BUFFs and 100 Raiders, or ideally even more: 220 bombers in total.

The costs involved with aircraft like these are astronomical. Giving each B-52 eight new engines and other upgrades requires a budget of about $130 million per plane, Ray says. The new B-21 Raider will be even pricier to buy, which is why the fleet of tomorrow would be a mix of vintage and new. What’s more, the B-52 is a metal bird that’s already in the hand, which is another reason to keep it running. “This is real,” Ray says, “whereas the B-21 is in parts getting put together right now.”

On a per-plane basis, the B-52 is less expensive for the Air Force to own and fly than the other bombers. The BUFF fleet costs the Air Force $1.4 billion per year, according to Harrison, which translates to around $18 million for a single aircraft annually. The B-1, meanwhile, clocks in at $23 million per plane each year, and the B-2 a whopping $43 million. Part of the reason for the difference is that because the Air Force has so many B-52s compared to the others, the operational costs per aircraft are much lower. But no matter how you slice it, bombers don’t come cheap.

The US has three different ways of deploying nuclear weapons: intercontinental ballistic missiles (ICBMs), nuclear missile-outfitted submarines, and those B-52 and B-2 bombers. The Air Force calls this apocalyptic arsenal the “nuclear triad.”

During a nuclear attack, Harrison says that America’s ICBMs would need to be taken out first: They’re a “missile sink.” Submarines, designed to survive, then would respond to that initial attack from their underwater hideouts. Non-stealth bombers are different, however, because they’re the most visible and dynamic. “They’re the one leg of the triad that is both unpredictable and can be used for signaling [to an adversary] in a crisis,” Harrison says.

Meanwhile, ICBMs, Ray says, are difficult to “message” with because the missile silos themselves are static. “Bombers, though, are flexible. And you can recall a bomber,” he says. “When I launch an ICBM—that’s it. Thirty minutes later, things are going down.”

Having BUFFs and other aircraft on hand also allows the military to conduct what it calls bomber task forces. Ray notes that they’ve sent bombers into the Black Sea, “which drives the Russians crazy, and it makes our day.” The same goes for flights into the Baltic Sea.

Russia performs similar operations with their fleet. Just this month, NORAD reported that that country flew bombers within 37 miles of Alaska.

As useful as the BUFF has been, though, CSIS’s Harrison wonders about the aircraft’s ongoing effectiveness against any country with modern safeguards. “If we have a conventional fight against Russia or China, the B-52 is a sitting duck to air defense systems and to Chinese and Russian fighter jets,” he says. In that case, the plane would have to operate at a safe distance from those countries, where its only effective weapons would be pricey cruise missiles. In a scenario like that, a stealthy B-2 or the forthcoming B-21 bomber might be more useful.

“At some point, you have to let important aircraft go,” Harrison says. “Is it really worth it to keep these planes in the air, or for the same amount of money, could we buy something else that’s more useful to us?” On that note, Harrison brings up a Navy aircraft called the P-8 Poseidon, which is like a 737 but can carry weapons such as cruise missiles. When asked if the military was thinking about a B-52 alternative like the Poseidon, an Air Force spokesperson said by email: “The Pentagon is carefully considering options and planning experiments toward the prospect of fielding such a plane.” A related idea is something called an arsenal aircraft, which could deploy what’s known as “standoff” weapons from afar.

Ultimately, the BUFF has its quirks—one of which was on full display during that March training mission out of Louisiana. The issue with the stubborn stay-down wheels stemmed from a fascinating design feature on the aircraft that allows the plane to pivot its main landing gear, so that if it’s landing in a cross wind, the nose of the beast can face into the wind while its wheels line up with the runway. Those landing gear legs can’t fold up into the belly, though, unless the switches say they’re centered. And sometimes the switches that control the wheels just “get out of rig,” an Air Force spokesperson wrote via email.

In fact, after that five-hour flight, another team quickly hopped into the same B-52 and took off again with the landing gear issue still unresolved, its crew said. That’s the BUFF. It’s not perfect, but it’s pretty good, and it gets a lot done. That should be enough to keep it cruising onward, punching through the sky for maybe the next three decades, perhaps with the occasional part out of place.

For more photos from inside and around the aircraft, click here or swipe through the gallery, below.