No, The FAA Isn’t Going To Shoot Down Super Bowl Drones

If anyone does that, it'll be NORAD. Or local cops. 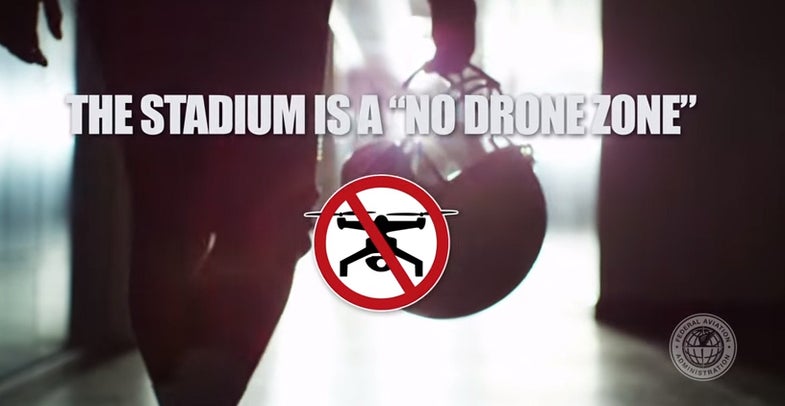 It is a bad idea to fly a drone near the Super Bowl on Super Bowl Sunday. The FAA, responsible for regulating the safe shared use of America’s skies, recently put out a Notice to Airmen restricting all flights within a 37-mile radius of Levi’s Stadium during the game this weekend. That restriction applies to private jets, commercial airliners, and small drones alike. Pilots violating this airspace restriction will potentially face civil and criminal penalties. But despite headlines to the contrary, it almost certainly does not mean anyone is going to use deadly force against a drone or a drone operator.

I’ve written about this before, and was struck by the references to “deadly force,” which aren’t in the announcement from the FAA or the official notice. As best I can find, it appears to come from an NBC story titled “FAA: Drones Flown Around the Super Bowl Could Face ‘Deadly Force’.“

Here’s the quote, as it appears in the NBC post:

This is technically always true, as the United States Government has a sovereign authority to the skies above America and it can make the call to shoot down aircraft deemed to be a threat. And the term “deadly force” appears in the FAA’s recommendations for police on illegal drone use. The document specifically states “The United States government may use deadly force against airborne aircraft, if it is determined that the aircraft poses an imminent security threat.” The document includes this line once in reference to presidential movements, and another time regarding the Washington, DC Flight Restricted Zone.

Popular Science reached out to Gregor by email for clarification on the quote as presented in the NBC story. Gregor emphasized that the key goal of the FAA’s campaign is to remind people of the aircraft operations (including drone flights) that are banned from the restricted area.

“The NBC reporter asked me what could happen to anyone who flies a drone in the restricted area.,” Gregor writes, “I explained the FAA can fine an individual who violates regulations up to $1,100 per violation. The per-violation fine is up to $27,500 for businesses. Additionally, anyone who violates the Temporary Flight Restriction (TFR) could face criminal charges. All that language is in the Notice to Airmen (NOTAM) that we issued for the TFR. The NOTAM also refers to what can happen to any aircraft that pose an imminent threat. The language can be viewed here: http://tfr.faa.gov/save_pages/detail_6_6446.html/.”

These are the expected legal penalties, which the FAA has publicized recently with the launch of their new drone registry. Important information for a drone pilot to know, but that doesn’t answer the question of deadly force.

“You would need to speak with NORAD,” Gregor wrote, “for any additional comment on what could happen to aircraft that pose an imminent security threat.”

Besides tracking Santa every Christmas, the North American Aerospace Defense Command is also responsible for detecting and warning about threats in American skies. When contacted by phone, NORAD’s public affairs department was unaware of any claim about deadly force. They noted that there are procedures in place for how they respond to threats, but when specifically pressed on the question of deadly force against small unmanned aerial vehicles, they answered “no comment.”

So does this mean the FAA is working with the American military to shoot down drones that might try and sneak pictures of the Super Bowl? Almost certainly not. It means that drone pilots, like the pilots of other aircraft, are expected to follow the law, and that means clearing the skies according to the restrictions set up by the FAA for safety and security during special events. If a drone pilot violates that, they may face civil and criminal penalties, and if they fly recklessly, they are, like any other pilot, subject to charges for reckless operation of an aircraft.

If, and this is a huge “if,” a drone pilot uses their drone in a way that threatens lives, then it’s possible for the United States government to respond with deadly force, in which case it will probably be local police, and not fighter jets scrambled by NORAD. Should it come to that, the force might not even need to be deadly: nets work well, carried by drone or fired by guns. Next year, the anti-drone security may even come in the form of an eagle.