And more probably lurk nearby. 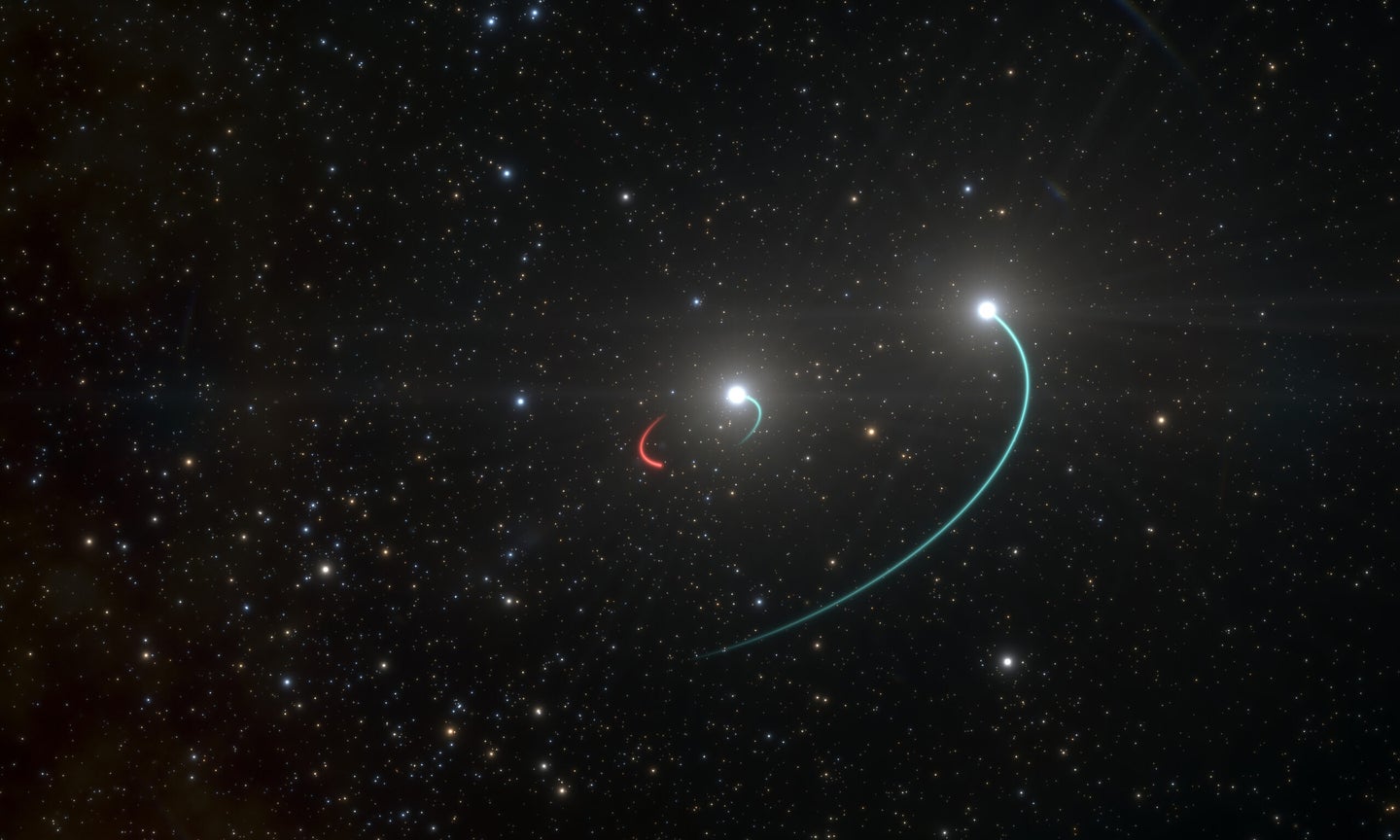 The crisp points of light that fill the night sky often play tricks on the naked eye. Take Sirius, our brightest star (after the sun). When magnified with a mighty enough telescope it splits into two stellar partners—Sirius A and Sirius B. Other systems come in threes, fours, or more. Much as planets orbit stars to craft solar systems, stars conspire with one another to form systems of their own.

Keen-eyed star gazers in the southern hemisphere might barely be able to spot one such system in the constellation Telescopium. While the otherwise inconsequential pinprick doesn’t look like much to the naked eye, past analyses of its flickering light have discerned a double star. Now, follow-up observations have found traces of a third companion hiding in the dark. Weighing in at more than four times the sun’s bulk yet emitting no detectable light, the invisible partner is almost certainly a black hole, researchers reported Wednesday in Astronomy and Astrophysics. Most strikingly, the system sits just 1,000 light years from our solar system, closer than any other known black hole. The unexpected find provides evidence for what astrophysicists have long assumed: it’s a black hole galaxy, and we just live in it.

“What exists nearby, must exist everywhere,” says Thomas Rivinius, paper co-author and astronomer at the European Southern Observatory.

A black hole is the final stage of life for any star at least a few dozen times more massive than our sun, so it’s natural to expect that they fill the Milky Way. Theorists predict that perhaps a billion lie scattered throughout the galaxy’s spiral arms—one for every few hundred stars. But once a colossal star has gone out, exploding and then collapsing into a dot so dense it traps any incoming light beams, how do you find it?

Locating a solitary black hole is just about impossible, but many black holes aren’t solitary. Astronomers have spotted dozens of the behemoths feeding on companion stars, a process that actually makes black holes shine brightly in x-rays as hot, glowing gas falls into their waiting maws.

Black holes that are truly dark betray their presence only by how they tug on stars that are perfectly placed: near enough to feel a gravitational pull, but far enough to avoid getting snacked on. Rivinius says that a handful of star systems show signs of harboring a dark member, although he considers only one or two of them to be sure bets. All these candidates, however, sit thousands to tens of thousands of light years away or more. (Many other well-known black holes, such as the first to be imaged, exist millions of light years away in other galaxies altogether).

Enter the dim point in Telescopium. Rivinius’s original interest was less exotic. He just wanted to know why the outer star was nearly spinning itself to pieces while the inner star turned more slowly.

Even though 1,000 light years away counts as pretty close for astronomers, it’s still too far for most optical telescopes to actually resolve the individual stars, so he and his colleagues broke down the point of light into its various components and analyzed how certain colors were changing. They repeatedly surveyed the system over four months from the La Silla Observatory in Chile and found that the inner star wobbled, shifting back and forth every 40 days or so, an indication that it was tangoing with a companion of at least 4.2 solar masses. But where a stellar partner would have left an opposing wobble in the group’s data, there was only darkness.

The researchers ruled out simple alternatives, such as the invisible companion being an unusually dim star. More exotic possibilities—such as a trio of sun-like stars teaming up like three kids in a trench coat—are possible but unlikely. Ironclad confirmation will require follow-up observations with interferometry, an astronomical technique that can separate the system’s stars.

If the system really is what it looks like, it’s most distinguishing feature may actually be how mundane it is: a normal black hole orbiting with two normal stars in our galactic backyard (1,000 light years is only about 1 percent of the Milky Way’s breadth). Astronomers often search for paradigm breaking objects—the biggest, the brightest, the most violent. But this triplet represents a different type of discovery. It illustrates how common such systems should be, the astronomical equivalent of looking outside your window and seeing a squirrel.

On top of supporting the theoretical picture of a galaxy quietly littered with modest black holes, the trio also serves as a window into stellar death. Astrophysicists know that when a large star explodes in a supernova (as this black hole presumably once did), it emits a shockwave that often sends partner stars flying. Models predict this phenomenon, and astronomers have seen unattached stars zipping through the galaxy with otherwise hard-to-explain haste. But this black hole managed to keep its two companions, suggesting that the tsunami of energy it unleashed did not roll out evenly in all directions.

Many more of these dark black holes likely await discovery, and researchers may barely need to observe the night sky to find them. “It’s the way to look for them that you need to develop,” Rivinius says. “You need to mine the existing data.” Such data from nearby double and triple star systems similar to those taken by Rivinius and his colleagues fill astronomical databases, accessible to any astrophysicist with a keyboard.