The Hubble Space Telescope just turned 30, and it’s working better than ever 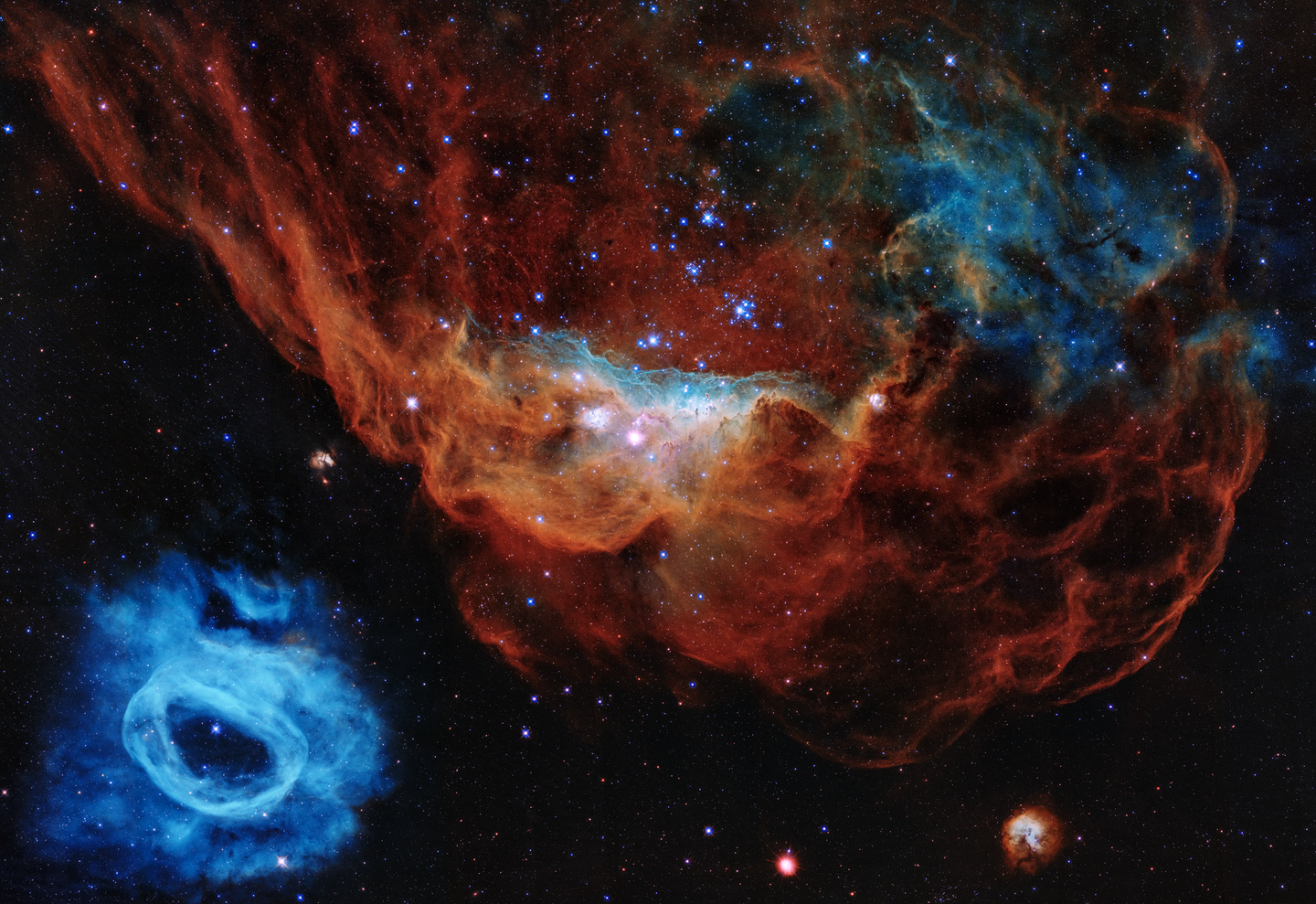 Hubble zooms in for an up-close look at star assembly in one of the galaxies orbiting the Milky Way. NASA, ESA and STScI
SHARE

On April 24, 1990, the Space Shuttle Discovery blasted off from Florida with an instrument that would forever divide astronomy into two eras: the time before space telescopes, and the time after.

From its perch above Earth’s fuzzy atmosphere, the Hubble Space Telescope has spent three decades peering into the darkness, indiscriminately collecting whatever stray light beams found their way to its giant mirror. From local moons, to distant planets, exploding stars, and far off galaxies, the world’s first and best-known space telescope has snapped images of them all, producing a voluminous gallery topping 1.4 million observations. Now NASA is celebrating the 30th anniversary of Hubble’s launch with one more picture—and it’s a doozy.

Taken earlier this year specifically to commemorate the observatory’s milestone, the image captures stars being constructed from gas swirling in the Large Magellanic Cloud, a small galaxy circling our own that can be seen in the skies of the southern hemisphere. The blazing young stars in the center each outweigh our sun by a factor of ten, and the blue cloud (colors indicate different gas types) represents detritus expelled from one star.

“It just reminds us of the beauty of our universe, and the ongoing activity,” says Jennifer Wiseman, a NASA astrophysicist and the senior project scientist for the Hubble Space Telescope.

It’s hard to overstate—or even state—how deeply Hubble has transformed astronomy with its eagle eye. Free from the blurring effects of Earth’s atmosphere, the telescope can do the equivalent of spotting clouds of fireflies in Tokyo from Washington D.C., or seeing an individual human hair from a mile away. Ground-based telescopes struggle to reach a tenth of that precision.

And the telescope has used that vision to observe the universe near and far. Astronomers have used Hubble to discover possible geysers of water on Europa, take videos of auroras on Jupiter, snap pictures of exoplanets around other suns, watch stars and gas whip around black holes, and clock the expansion of the universe. “It’s rewritten the textbook in every area you care to look,” says Mark Clampin, NASA’s Director of the Sciences and Exploration Directorate.

It’s a remarkable legacy, especially considering that the wunderkind observatory started off its career in ignominious failure.

A nearly eight-foot mirror lies at the heart of the spacecraft, expertly ground to exquisite smoothness. But tragically, it’s the wrong shape. During manufacturing, engineers measured its curvature with two different tools, one older manual instrument and a newer laser-based device. The first indicated that the mirror was flawed while the second suggested it had the right form, and rather than investigate the disagreement the team chose to believe the high-tech doohickey. “If you’re over budget and behind schedule and people are mad at you, there’s a temptation to talk yourself into an answer you like,” said astronaut Kathryn Sullivan during a lecture at the Symphony Space performing arts center in New York City on Dec. 3, 2019.

The one-millimeter “spherical aberration,” as the flaw came to be called, was imperceptible to the human eye, but it wrecked Hubble’s vision. NASA knew immediately that it had a problem when their shiny new space telescope, the product of decades of planning and $4.7 billion at the time of launch, returned pictures with sharp centers but blurry halos. Astronomers ran to mathematics textbooks to find techniques to correct their data and make the best of a bad situation, while the mission became a national laughingstock. A young Jay Leno once joked on late night that the government should “shoot down” Hubble and “put the thing out of its misery.”

But NASA had another idea. Mission planners had entwined the telescope’s design with that of the Space Shuttle program, making the machine serviceable by astronauts. After three years of scrambling, the engineers designed a second mirror that could correct the aberration of the first like a pair of glasses, and a team of astronauts (including Sullivan) launched to slot it into place. The astronauts also installed a new infrared camera, starting a tradition of upgrading Hubble’s components that would span five missions. “That has left us with a new observatory every time they have visited,” Wiseman says.

So even as Hubble aged, many of its parts have gotten facelifts. Clampin says that the mirrors, supports, and many electronics boxes are original, but the solar panels, batteries, instruments, reaction wheels (for pointing), and computers have all been upgraded—some as recently as 2009. The Space Shuttle program has since ended so Hubble now flies beyond our reach. But if the telescope could somehow return to Earth, it would actually weigh 3,000 pounds more than it did at launch.

The astronomical community has put all that hardware to good use. Hubble beams down about 19 gigabytes of data every week—the equivalent of six hours of HD Netflix binging. Data from the telescope has led to more than 17,000 journal articles, with more than 1,000 publications last year. Researchers compete fiercely for access to the machine with roughly 90% of proposals being rejected.

Amongst the essentially innumerable scientific highlights, Wiseman and Clampin both single out two fields that Hubble has particularly revolutionized: exoplanet science and cosmology.

When Hubble launched, five years before the first exoplanet was discovered through indirect means, astronomers debated whether the telescope would be able spot them directly, Clampin recalls. It’s seen a few, mostly hot young worlds still glowing from the heat of formation, but Hubble’s real success lies in capturing light filtering through exoplanet atmospheres as they pass in front of their star. This technique, which didn’t even exist when engineers built Hubble, has since been employed to discover liquid water and perhaps even clouds on alien worlds. “If you asked anybody 30 years ago if they thought that was possible,” Clampin says, “they’d have thought you were nuts.”

But Hubble’s greatest superpower may be its ability to peer into past, because of the way the speed of light yolks distance to time. The telescope’s deep field research program has stared longer and longer at dark patches of space, zooming into tiny spots of sky to resolve the thousands of galaxies each contains. Light from the farthest galaxies took billions of years to reach us, and with intense squinting Hubble has been able to see galaxies that existed a few hundred million years after the big bang. The universe back then, at just a few percent of its current age, was a hot mess. “As you look further and further back in time, you can see more and more violence,” Clampin says. “You don’t have galaxy-looking galaxies anymore. They’re all train wrecks,” tearing through each other at high speeds.

Cosmologists have long understood that getting from the smooth soup produced by the big bang to today’s lumpy universe of stars and planets involved a lot of growing up. But Hubble has been able to produce direct images showing exactly how galaxies have matured over the eons, helping researchers measure the age of the universe and discover the expanding influence of dark energy. It’s the difference between assuming your friend must have had some wild college years, and then getting access to their photo library. “That’s been something Hubble has really helped us understand,” Wiseman says. “How the universe has changed and progressed over time to being the life-friendly place that we enjoy, at least on one planet.”

As astronomers move into the fourth decade of the space telescope era, they look forward to a host of new discoveries from instruments young and old. After its 2009 servicing, Hubble remains at the top of its scientific game, and Wiseman expects that it may live to see its 40th anniversary.

Soon joining Hubble in the sky, possibly even next year, will be the highly anticipated James Webb Space Telescope (JWST), which will complement Hubble’s abilities with more reflecting area to collect light and an ability to see a wider variety of infrared colors. Astronomers expect the JWST will detect new elements in exoplanet atmospheres (including, just maybe, cocktails indicative of alien life), as well as even younger galaxies.

Looking farther ahead, the launch of the Wide Field Infrared Survey Telescope (WFISRT) in the middle of the decade could let cosmologists study the distant past more broadly. “Think of the Hubble deep fields as at little thumbnails,” Clampin says. “WFIRST will give you the full HD TV view of these regions.”

These up and coming space telescopes will build on Hubble’s legacy, but they will also be products of it. Clampin, who has been deeply involved in the assembly of the JWST, says that engineers now insist on getting identical mirror measurements from at least two different tools as to not repeat Hubble’s mistake. They’ve even had to ask companies to build them custom devices just for that purpose.

As NASA’s growing fleet of space telescopes continues to expand our view of the universe, one unforgettable motto of the Hubble era will undoubtedly live on: Measure twice, launch once.