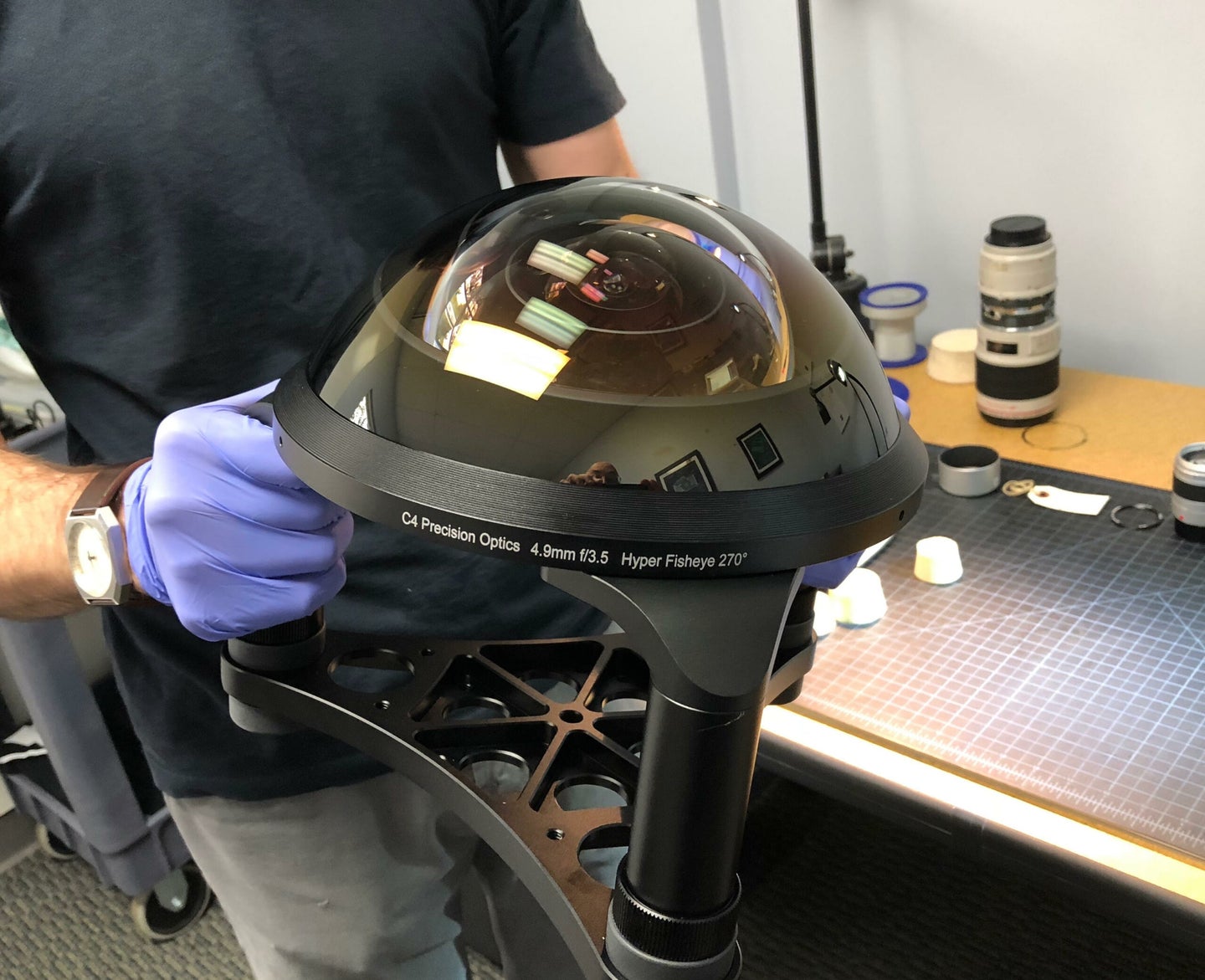 Lenses don’t have to be complicated. In fact, you can punch a pinhole in an old oatmeal canister, add some film on the other side, and start making pictures. Once glass gets involved, however, camera lenses can achieve some truly amazing feats of refraction. Need proof? Look no further than the massive chunk of optics pictured above.

The C-4 Optics 4.9mm f/3.5 circular fisheye is unlike anything currently on the market. It’s a fisheye lens that creates a circular image on a typical full-frame image sensor, which is the same size as a frame of 35mm film. The lens has a 270 degree field of view, which means it can literally see behind itself. It’s not up for sale on Lens Authority for $39,000.

“We set it on a stool in the workshop facing upwards and you could see the whole room,” says Roger Cicala, one of the world’s foremost experts on lens testing and founder of Lensrentals.com. “You can even see the floor.”

The circular fisheye means the image will appear in the center of the frame as a circle with black corners. Software can unpack the images into a view that VR headsets like the Oculus Rift can understand.

That kind of field of view is typical for virtual reality, and shooters usually achieve it with an array of cameras that simultaneously capture footage in different directions while software stitches it all together. This ultra-wide lens, however, pulls enough information onto a typical camera sensor that software can expand it into a VR scene.

“The weather service is interested in using something like this to capture a scene all the way around,” says Cicala. He also says they’ve considered hanging it from the rafters of sports games to show off the entire scene during critical game moments.

Cicala and optical designer Brian Caldwell started C-4 Precision Optics back in 2015 with a blog post on April 1st. People thought it was an April Fool’s Day joke because of the date, but also because of the preposterous lenses the piece proposed. One lens codenamed “flying saucer” laid out the initial design and idea for the 4.9mm fisheye.

The lens drew inspiration from the iconic 6mm Nikon fisheye lens that has a 220-degree field of view and commands a price well over $100,000 at auction. No one knows for sure how many 6mm Nikons there were because the company only built them to order starting in 1972. The lens is rare and served a specific purpose, but its extreme design made it flawed. It suffered from serious lens flare, which manifests as bright artifacts in the image and reduced contrast across the frame. The effect is typically more pronounced when light hits near the edge of the lens, and fisheye lenses with rounded front elements are almost all edge.

Cicala and Caldwell, his business partner, set out to make a lens that was even wider, while increasing its ability to resolve detail and combat distortion.

Ahead of the curve

According to Cicala, the most difficult part of making the lens from a manufacturing perspective is the massive piece of glass—typically referred to as an element—on the front of the lens itself. The piece of curved glass alone weighs in around a 2.2 pounds and needs to be completely free of flaws. “It was hard to find a glass lens manufacturer who thought they could do this. It wasn’t just the making of the glass that was hard, but it’s out of the curves of a normal coating machine,” says Cicala. “We have four front elements for our prototypes. They had to cast 10 or 12 just to get those four.”

The bulbous piece also caused problems in other parts of the manufacturing process. For instances, its shape put it outside the typical tolerances allowed for applying anti-reflection and protective coatings to typical lens elements, which means machines needed adjusting.

Even the lens cap was a challenge to engineer. “We made a mock-up of the cap and the first time we put it on a mockup of the lens and it wouldn’t come off. It’s so huge that the air leak as you push it in put quite a seal on it,” says Cicala. “We ended up having to drill a little hole in the cap to get it off so we had to redesign the cap with vents.”

Because the lens is so massive, it needs its own support structure, which the company built from custom manufacturer parts. The back of the lens is a piece of metal referred to in the industry as a “cheese plate” that allows shooters to mount accessories typical for shooting high-end video. The camera sites between the plate and the lens itself, so the legs extend to allow different cameras to fit inside.

In order to capture light from behind the lens on a flat sensor, the lens does some extreme refracting when it comes to the light it takes in. But, despite its complex methods for capturing light, Cicala says the lens could theoretically capture footage at up to 14k resolution. While he’s skeptical the lens can pull of such a feat in real life, he does say the lens will have more than enough resolving power for 8K capture.

C-4 doesn’t expect many folks to outright buy one of these lenses, especially since the price tag be in the neighborhood of a well-equipped family sedan, but that’s not uncommon for high-end cinema or TV production lenses.

Cicala says that C-4 has some of its other outrageous lenses designed, but it’s a matter of turning them into reality. He says the 150mm f/1.0 could be the next on the docket. For those unfamiliar with lens nomenclature, that’s a telephoto lens that lets in much more light through a larger aperture. The resulting images would have profoundly blurred backgrounds with only a very small sliver of an image in focus. If you had a person against a background of some trees, for instance, only a portion of the person’s face would appear in focus.

“It would look like a scaled-up version of a normal lens,” says Cicala. “The front element is 9 inches in diameter, though.”