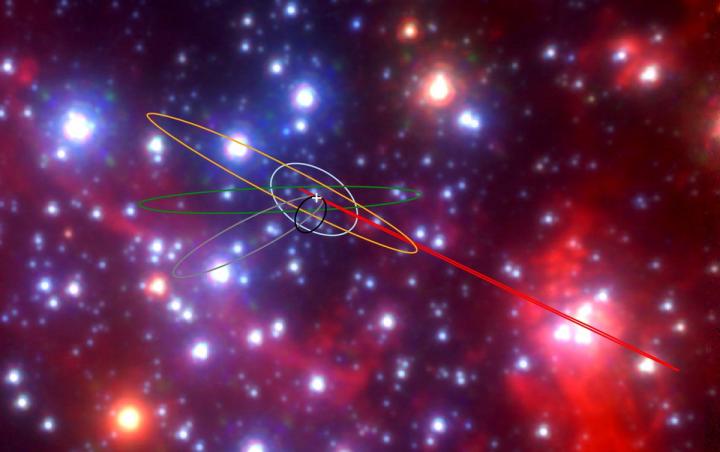 In 2012, black hole spectators thought they had hit the jackpot: a gas cloud, dubbed G2, was swinging into a potential danger zone at the Milky Way’s core. For two years, astronomers watched with bated breath as G2 sped closer to the galaxy’s central black hole—Sagittarius A* (read “A star”). With a few million times the mass of our sun, the monstrosity’s intense gravitational pull was going to shred the wispy gas cloud and feed ravenously on its remains.

“Everybody was waiting for fireworks,” says Anna Ciurlo, an astrophysicist at UCLA. “We were going to see, for the first time, accretion onto the black hole directly.”

But that’s not what happened. As G2—a cloud more than twice as wide as the distance from the Sun to Pluto—got nearer to its point of closest approach, it stretched out into a smear. It strained under the influence of Sgr A*’s pull, but did not break, and then drew itself back into its usual rotund shape as it retreated. The object’s unexpected durability denied Sgr A* its meal and Earthbound astronomers their spectacle. (Although, a flare up last summer could indicate a delayed nibble of a G2 fragment after all.)

Now, researchers report that G2, and a similar G1 object first spotted in 2005, aren’t just one-off swirls in the frenetic turmoil of gas, dust, and stars streaking through the galactic center. Rather they represent the first members of a new group of solar-system sized objects that shine like gas but move like stars, according to results published Wednesday in Nature. The researchers report the discovery of four new dust-enshrouded blobs (G3 through G6) and speculate how they might be surviving their extremely violent environment.

Ciurlo and her colleagues belong to a group at UCLA that has been indirectly studying the central black hole by watching the movements of nearby stars for two decades through a partnership with Hawaii’s Keck Observatory. “We’ve basically gathered a very rich data set,” she says, “not only of information about the stars but everything else in the region.”

The team set out to decipher how gas clouds stretch and move in the vicinity of the black hole, but became distracted by these persistent objects that kept popping out in their data sets. They shone with the right infrared color to be ephemeral gas clouds (as opposed to stars, which emit visible light), but act more like their persistent stellar counterparts. “They orbit the black hole. They remain compact. They survive for a very long time,” Ciurlo says. “just like how G2 survived its close encounter.”

One idea, proposed by earlier researchers to explain G2’s resilience, suggests that each gas cloud is hiding a star at its center—one perhaps a couple of times the mass of our sun. This modest mass could pull nearby gas and dust around it, but wouldn’t glow brightly enough to shine through its cloudy cloak and announce its presence.

But how do the “G objects” (G stands for “gas,” a holdover from their initial mistaken identities) get their veils? Sgr A* could have busted up any planetary material they once had, or the stars themselves could be losing mass. Or, as the team currently considers most plausible, the gas clouds could represent the messy aftermath of Sgr A* slamming two stars together.

Many stars are born together as pairs. Normally such twins live out long lives, orbiting each other for billions of years. But the presence of a massive third party—such as a black hole—can muck things up, sending them spiraling toward each other in just a million years. The collision produces a larger star, as well as tons of gas and dust. And that debris could swirl around the merged star, hiding it from view.

The G objects orbit Sgr A* in skewed ellipses, large and small, just as the visible stars do, which supports the notion that the same objects ultimately make up both groups. Rough estimates of population size and age also match the merger idea, but the theory remains far from a sure bet. “I think it fits very well, but we need to confirm it by looking for objects in other regions,” Ciurlo says. “We need to see if it’s really connected with the black hole or not.”

Since only the gravitational disturbance of a black hole could destabilize star pairs enough to create these dusty blobs, if astronomers find them far from Sgr A*, say in the outer reaches of the galaxy, then researchers would have to look for another explanation. Ciurlo says the discovery of the new objects could also motivate theorists to run the complex calculations needed to simulate exactly what the merged stars should look like. If the blobs do turn out to be ex-binary stars, it’d bolster astrophysicists’ understanding of the complex environment surrounding supermassive black holes. With more knowledge to stand on, they could better predict the goings-on at the centers of other galaxies similar to the Milky Way—distant places that are harder to directly image in such detail.

In the meantime, Ciurlo looks forward to continuing to search for new mysteries in the chaos unfolding at our galaxy’s center. “It’s hard to find these objects,” she says. “We’ve been obsessed about the galactic center for so many years, and we just found them now, so this region is extremely interesting and extremely rich.”