China’s Tiangong space station is almost complete. Here’s what it means for the country's rise as a space superpower. 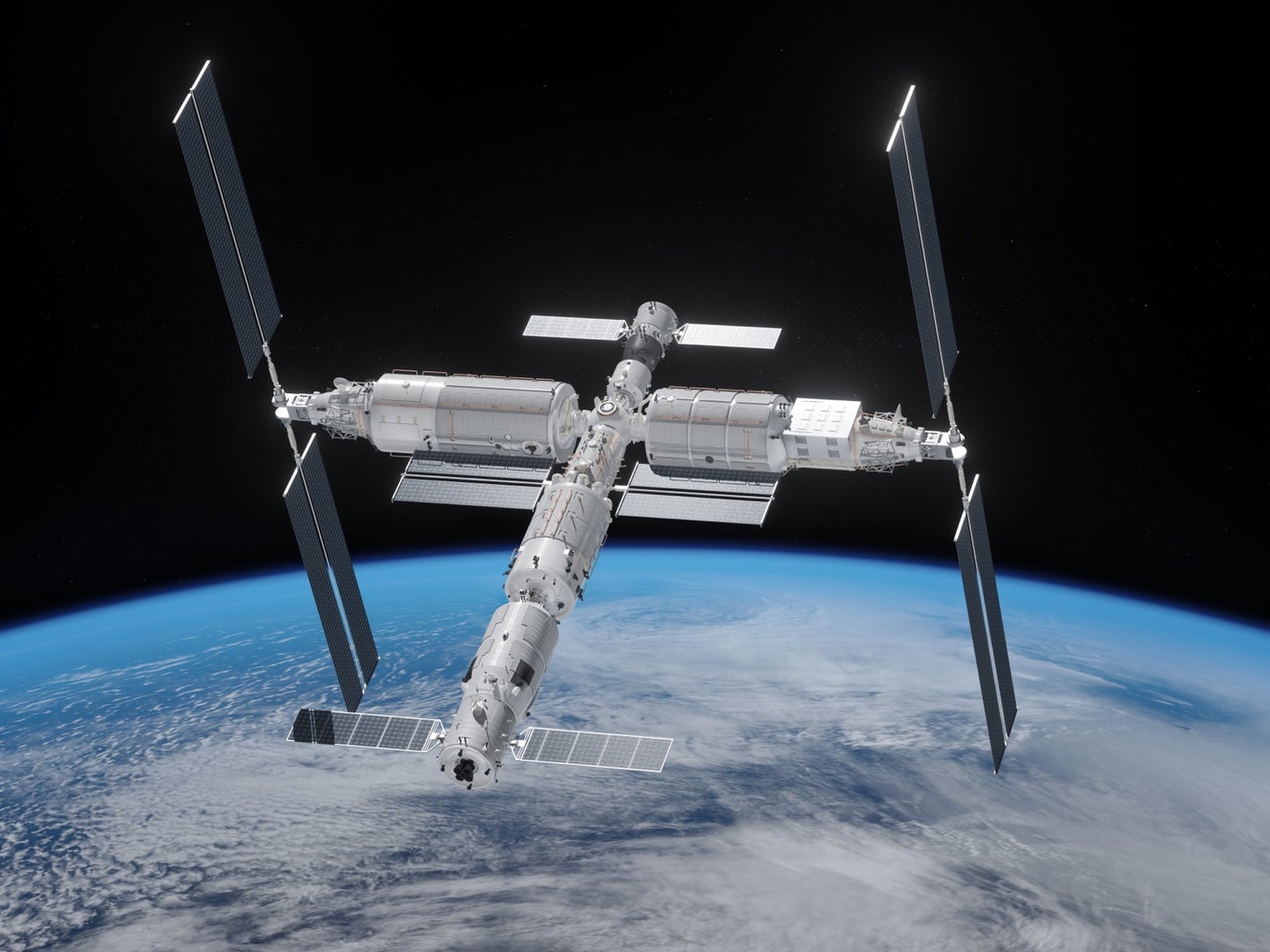 At the height of the Cold War, large-scale investigations beyond our planet served as the dramatic stage for the post-nuclear era power struggle between the United States and the Soviet Union. This anxious tension fueled the early days of the space race—catapulting new technologies, forming space agencies, and laying the foundation for future advancements in nearly every mechanical aspect of our society.

Between the US and what is now Russia, the two nations have long been titans in the space industry, but today’s space race has a new challenger. Later this year, China will put the finishing touches on the Tiangong space station, (which translates to Heavenly Palace) the country’s first space outpost. The Chinese National Space Administration launched the first phase of the multi-module station more than a decade ago, and now the station’s construction will end with the addition of the laboratory cabin Mengtian, the third and final module needed to complete the compact T-shaped structure. Tiangong station will be China’s “most adventurous space endeavor,” the agency states.

Unlike the International Space Station (ISS) which exists thanks to a conglomerate of many other countries and their space agencies, Tiangong will be the only independent space station once in operation, a feat that in all likelihood will heighten geopolitical tensions. The ability to create and support such a fixture in orbit is often a reflection of a nation’s total global power and influence. Yet, China’s résumé of successful space enterprises, while certainly not robust, has been surprisingly packed in the decades leading up to Tiangong—at the near-end of the 20th century, it had been the fifth country in the world to successfully launch a satellite in space. The newest fire fueling their fierce determination lies in how space science has become intertwined with development, including China’s national security, economic progress, and their public science and education initiatives.

Much of the nation’s initial push to invest time and resources into the space scene in part stemmed from both international foresight and isolation from many early cooperative space programs. Particularly, in the 80s and 90s, the country faced many domestic and economic challenges (such as the overturning of fiscal and cultural policies that had choked off growth and global commerce), but China quickly realized the space sector would become a very important domain in the years to come, says Krolikowski. Such avid commitment and self-sufficiency towards more advanced space exploration is one of the reasons why China’s achievements (and at times, their failures) have so often been in the limelight.

In recent years, China’s frenzied push to increase the scope of their space activities has resulted in a satellite navigation network (strong enough to rival the US-supported GPS system), an unmanned probe to Mars, and the first craft to explore the far side of the moon, Chang-e 4. The discoveries the robotic probe’s companion, the semi-autonomous Yutu-2 rover, made also could help pave the way for future robotic treks of the southern pole of Earth’s satellite.

Simultaneously, the nation’s commercial space industry is beginning to bloom, as many private ventures are beginning to launch new vehicles like cargo-carrying spacecraft and other satellites. A fully independent space station could act as a launchpad for future endeavors, catapulting scientific inquiry to new heights, including progressing China’s long-held objective of getting taikonauts (the Chinese counterpart to NASA astronauts) to someday land on the moon. While the station will be a gateway for many planned ventures, Tiangong will be notably much smaller and have less crew capacity than the International Space Station. Despite these constraints, the vessel will still have more than enough room to conduct vitally important scientific experiments.

Along with the second module, Wentian, the newly-added Mengtian module is a nearly 60-foot-long pressurized laboratory where researchers will be able to conduct microgravity experiments as well as other physics and aerospace technology research for human exploration. Tiangong will also allow China to explore mutually beneficial partnerships with other countries. Once in action, the station will support over 1,000 experiments during its lifetime, many of which were submitted from researchers all over the world.

Jonathan McDowell, an astrophysicist at the Center for Astrophysics at Harvard and Smithsonian in Cambridge, Massachusetts, and an astronautics historian, is especially interested to see how well the station will support Xuntian, the Chinese Space Station Telescope (CSST). While Xuntian is reputedly said to be a counterpart to the Hubble Space Telescope, because its field of view will be 300 times greater than the 32-year-old observatory, McDowell says it’s actually more similar to NASA’s upcoming Nancy Grace Roman Space Telescope.

“This new generation of telescopes looks at a much larger area of sky at once, perhaps in somewhat less detail [than Hubble or the James Webb Telescope],” McDowell says. “It’s mapping out large areas of the sky, rather than looking at things you already know are there and sort of probing with precision.”

[Related: With a new set of cracks, the ISS is really showing its age]

It’ll be a while before either telescope is ready to gaze into the abyss, but what is obvious is that many of China’s projects follow a deliberate pattern of replicating what’s already been achieved, applying the lessons learned by their competitors to advance and improve their own designs. For example, from the outside, Tiangong station is a near identical copy of Russia’s Mir space station, which survived nearly 15 years in orbit before breaking up over the southern Pacific Ocean in 2001. One glaring difference in China’s design is the addition of a nearly 20 foot-tall robotic arm that will be able to move different modules around as well as provide support for other spaceflight activities. As Earth’s atmosphere begins to get more crowded with human-made refuse, China’s past issues with uncontrolled rocket debris will also have to be better addressed if the agency wants to support sustainable space exploration. While there are no public plans on how the country will handle these concerns going forward, the nation is still the first and only to test experimental space debris mitigation technologies.

At present, NASA is banned from collaborating with China or Chinese-owned ventures, including providing funding and any other operational partnerships. Future collaboration between Tiangong and the ISS is also highly unlikely, given that any international scientific effort would at least in part be headed by the US. Given the United States’ tendency to take charge in its international operations, China may be wary of joining a partnership that the US has so much pull over, says McDowell.

However, the station is “very attractive to a lot of international partners that don’t have such comprehensive space programs,” says Krolikowski. “Not just developing countries that want to participate in a smaller way or in a supporting role, but even major European countries, can find attractive areas of cooperation with China.”

Still, while the nation may be behind in adopting the do’s and don’ts of responsible space practices, many in the political and scientific community are optimistic that as China’s presence in the cosmos grows, they’ll begin to catch on.

“As time goes on and as they mature as a space power,” says McDowell, “they’ll also mature in the sense of being good space citizens.”