Dust to dust: How Earth’s most advanced observatory is unraveling our origins 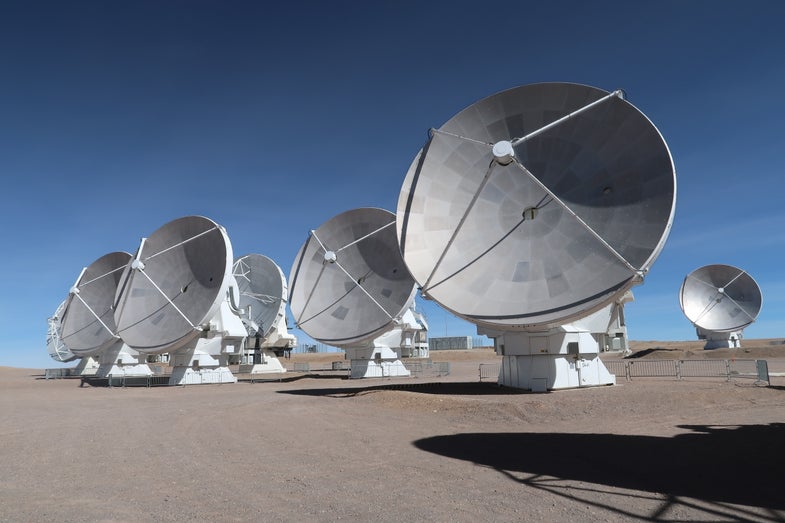 Very little stands between the dishes of Chile’s ALMA array and the cosmos. Charlie Wood
SHARE

SAN PEDRO DE ATACAMA Visiting the Atacama Large Millimeter/Sub-millimeter Array (ALMA) is not for the faint of heart. After driving up the barren plateau to meet my guide Danilo Vidal, ALMA’s visit coordinator, the first stop was a health check. Just to hang out for a few hours at the Operations Support Facility where ALMA’s staff lives and works to solve the mysteries of the cosmos, I had to prove that my heart beat not too fast and not to slow, and that oxygen saturated at least 80 percent of my blood (at a recent sea-level physical I scored 96 percent).

But the extreme environment hasn’t stopped nearly two dozen countries from coming together to build the most ambitious astronomical tool on the planet. Getting 66 state-of-the-art antennas to operate in sync at a facility nearly as high as Everest’s base camp takes hundreds of engineers and other staff operating with military precision. Now fully functional after decades of construction and six years of upgrades, the institution is finally devoting much of its power to one of its main goals: watching for the heat glow of dust as it swirls around young stars. Already ALMA observations are rewriting the story of how those systems go from clouds of sand to families of planets, which is also the story of how Earth became the third rock from our sun.

A blood oxygen saturation of 91 percent won me clearance to carry on, although Vidal handed me a single-use canister of oxygen just in case. Then we climbed into his SUV and he hooked up his own nasal hose leading to two heavy duty oxygen tanks. “Regulations,” he said, as we started the drive up to the top of the Chajnantor Plateau, cactuses and vicuñas rolling past at the mandated 20 miles per hour.

Our eyes bias us toward the rainbow hues we can see, but many other types of light permeate the universe. Stars burn across and beyond the visible spectrum, black holes emit x-rays and radio waves, and stellar explosions shoot out rays of many varieties. Only by looking at all these different “colors” can we get a complete picture of the cosmos.

ALMA, which looks at light waves about a millimeter in length, functions as the world’s greatest set of night vision goggles. Objects emit different types of light depending on their temperature, and the observatory’s antennas let it pick out objects that aren’t hot enough to shine like stars. To its eyes, cool dust glows brightly against the frigid background of space, similar to how warm bodies shine to infrared cameras. In fact, ALMA is blind to visible light altogether, which lets it watch the skies both day and night.

The story of dust is really the story of everything we can see, which is why the astronomical communities of North America, Asia, and Europe banded together with the Chilean government and spent 1.5 billion dollars to build an observatory on top of the world’s driest mountain. Clouds of hydrogen in space collapse into stars, spinning up disks of leftover dust that eventually swirl into the planets, asteroids, and comets that make up solar systems. We can study our own cosmic neighborhood up close, but researchers ache for more diverse, younger examples to sort patterns from coincidences.

Computer models go a long way toward that goal, but there’s no substitute for images catching the planet-birthing process in action. Previous millimeter instruments lacked the necessary power, but on this front ALMA has been a game changer. “It’s rare that you get this big of a leap,” says Sean Andrews, a researcher at the Harvard-Smithsonian Center for Astrophysics. “This is like going from a little handheld telescope to the Hubble space telescope.”

At the top of the plateau I could immediately see how ALMA gets those money shots. Even without as much as a blade of grass in sight to help your brain calibrate size, the sprawling Array Operations Site looks huge. But before I could see the antennas up close, it was time for another health check. We entered what Vidal says now counts as the highest technical building in the world after a Nepalese train station stopped working last year, and I narrowly received clearance to continue the tour with 3% oxygen saturation to spare.

ALMA is an interferometer rather than a telescope, splitting its operations among 66 large dishes that span an area impossible for any single instrument—more than a mile across. That was the size when I visited, anyway—each of the 100-ton antennas is portable. Two monstrous forklifts, nicknamed Otto and Lore, lug a couple of antennas per day in an unceasing dance that, over the course of months, blows up the array to an unparalleled ten miles across. By expanding and contracting, astronomers can prioritize either detail or scope in a cosmological version of the smartphone’s pinch to zoom function. They just have to make sure the dishes stay plugged in the whole time (the forklifts have a battery system that supplies electricity). If the power fails and the internal machinery warms much beyond its operating temperature of 450 degrees F below zero, the driver will be left holding a multi-million dollar brick.

Fortunately that hasn’t happened yet. Finally at full power, the array creates images ten times sharper than it did during its 2011 debut, a resolution that increasingly allows astronomers to grasp the finer details of planetary formation.

The first step in a dust grain’s journey from “fluffy sand” to a proper world depends as much on how it communes with its neighbors as it does on the disk at large, according to Karin Öberg, the leader of Harvard’s astrochemistry group and one of five North American representatives on ALMA’s board. Laboratory work suggests that planetary seeds start by becoming sticky, gaining an ice coating through collisions with hydrogen and oxygen. Picking out specific elements from hundreds of light years away is tough, but ALMA has spotted extraterrestrial sugar and alcohol.

Growing larger than icy dust bunnies seemed theoretically impossible for years, empirical evidence beneath our feet notwithstanding. The spinning forces inside a disk should tear dust clumps apart before they can swell beyond the size of a rice grain, models predicted, unless somehow particles were gathering in special, denser areas.

A team led by astrophysicist Nienke van der Marel of the NRC Herzberg Institute for Astrophysics in Victoria, Canada snapped the first direct images of just such a “dust trap” while at Leiden University in the Netherlands in 2013, confirming decades of modeling. “People doing simulations of processes in a disk were working almost independently of observers,” she recalls. “Theory had drifted from observations and ALMA really brought that back together.”

Now the observatory’s new data has the simulators playing defense. When ALMA trained its dishes on HL Tau, a young star ringed by a dusty cloud 450 light years from Earth, it should have seen a smooth disk. Planets take millions of years to coalesce, the thinking went, and this system was barely a tenth that old. Yet the images came back in 2014 showing an incandescent red disk split by a half dozen crisp grooves—likely signs of baby planets hoovering up dust as they orbit. Now, a soon-to-be-published survey of 20 such disks led by Sean Andrews confirms that HL Tau is more rule than exception. However planets form, ALMA’s night vision is revealing, they’re doing it everywhere— and fast.

Returning to the Operations Support Facility halfway down the plateau, Vidal and I ran into two Italian filmmakers wandering the halls after failing their health check. They had two hours to wait for their second—and final—chance to pass. Vidal speculated that they’d ignored instructions to resist the temptation of coffee at breakfast.

Now safe to drink caffeine, we sat down for tea with Matias Radiszcz, a bearded data analyst from Santiago and unsung hero of this kind of operation. Radiszcz does battle with the facility’s main enemy: humidity. Even in a desert so dry that parts haven’t seen rain since the days of Isaac Newton, traces of water vapor always hang in the air. Radiszcz adjusts antennas to adapt to the humidity in real time. He also takes shifts as the Astronomer on Duty, deciding which observations to run out of the hundreds in the queue.

Between the altitude and the often nocturnal schedule, ALMA engineers have to get used to leading groggy lives, but participating in the unraveling of the Earth’s origin story makes the week-long shifts away from his family and the sleepless nights worthwhile. “The motivating thing is to be in the place where it’s happening,” Radiszcz says. “The Earth is like an oasis in the universe, and you can understand the value of humanity and the fragility that is life.”

By the time Vidal sent me on my way back to the town of San Pedro, the Atacama desert’s local oasis, the sun was just starting to edge below the horizon as the Earth spun Chile away from its rays. I hopped in the rental car and slowly drove back down the mountainside, a thin cloud of dust swirling behind me.

The reporting for this article was partially supported by a grant from the National Science Foundation.