The fearsome Dineobellator boasted strength, speed, and a fine coat of feathers. 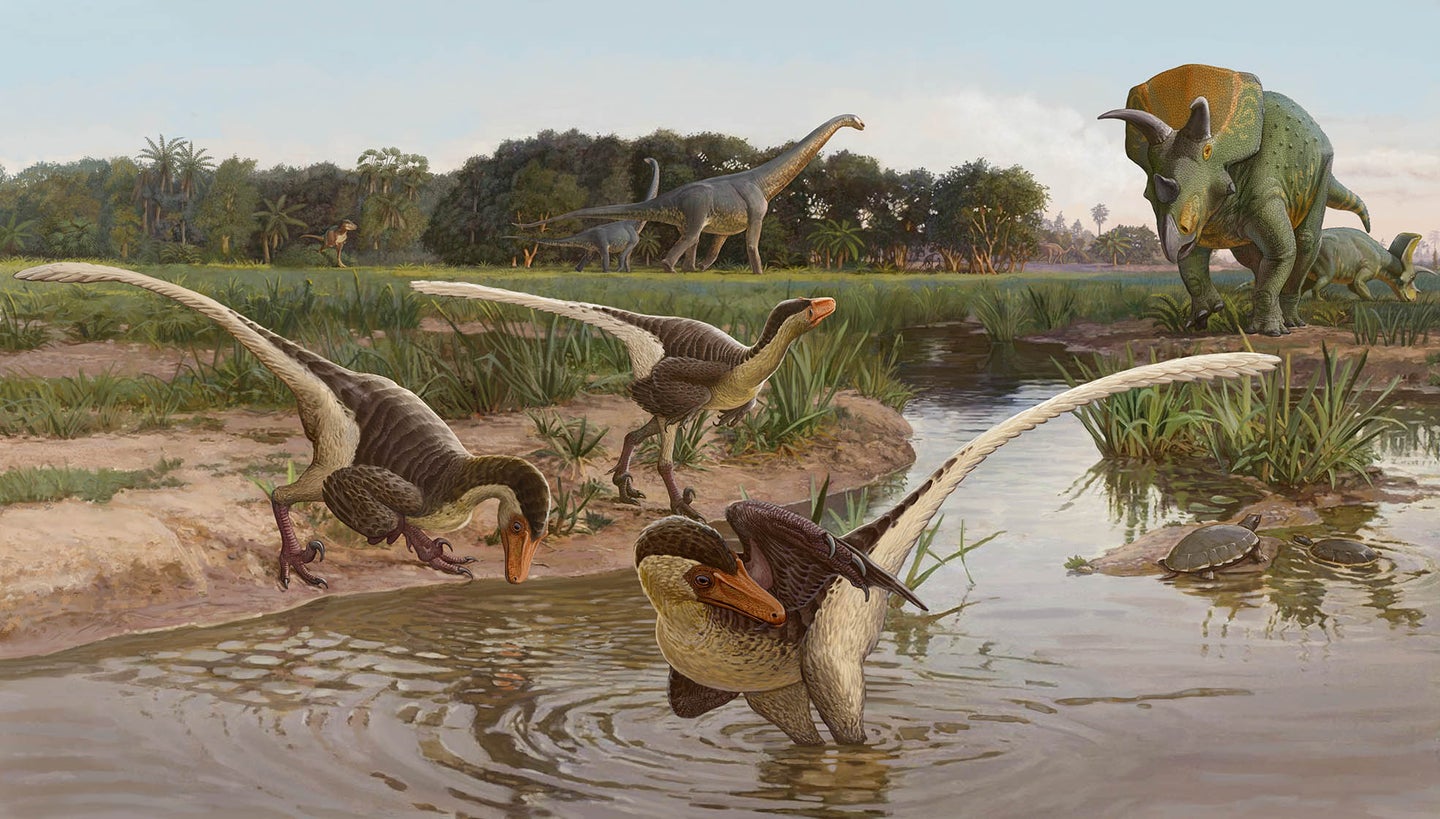 An artist's recreation of the newly discovered Dineobellator notohesperus at the end of the Cretaceous Period in New Mexico. Sergey Krasovskiy
SHARE

A newly discovered dinosaur was a cousin of Velociraptor but might have been an even more formidable hunter than its family member.

The raptor, which the researchers have named Dineobellator notohesperus, lived in northwestern New Mexico at the end of the Cretaceous Period. When paleontologists examined a partial skeleton of Dineobellator, they found features in its forelimbs, claws, and tail indicating that the dinosaur was both strong and nimble.

The fossils are among the youngest known for any member of the raptor, or dromaeosaurid, family, and indicate that this group was splitting into new species right up until the end of the dinosaurs’ reign, says Steven Jasinski, a paleontologist at the State Museum of Pennsylvania in Harrisburg. He and his colleagues described the new species March 26 in the journal Scientific Reports.

Dromaeosaurids are a family of swift, lightly built predators with an enlarged “killing claw” on each foot. They seem to have had relatively big brains for their size and hunted in packs. Fossils of this family are rare, particularly from the Late Cretaceous.

Jasinski and his colleagues stumbled across the first evidence of a previously unknown dromaeosaurid in 2008, when they found a distinctive claw in New Mexico’s San Juan Basin. On subsequent trips, they unearthed enough bone fragments and relatively complete bones to distinguish the new species from its relatives.

The team estimates that Dineobellator was a medium-sized dromaeosaurid about 6 to 7 feet long and 3 feet tall at the hip that weighed around 40 to 50 pounds. Little bumps known as quill knobs indicate that the animal had large forearm feathers as well as feathers throughout its body. The researchers also examined attachment sites for muscles in its upper arms, hands, and feet, and concluded that Dineobellator would have gained more strength from flexing its arms than the typical dromaeosaurid, as well as having a more powerful grip.

Dromaeosaurids generally had stiff, straight tails reinforced with rod-like bones and tendons that made the tale balance out the rest of the body while they chased down prey. “The difference with Dineobellator is the base of the tail close to the hips was highly mobile, which means it could move around very quickly,” Jasinski says.

In this way, Dineobellator might have resembled present-day cheetahs, which can change direction mid-dash by quickly flipping their tails around while keeping them stiff enough to counterbalance their movements. “It suggests that Dineobellator would have been not only very fast but also highly agile and a really good pursuit predator,” Jasinski says.

The Dineobellator specimen that Jasinski and his team inspected also had evidence of a healed rib injury and a gouge mark on one of its hand claws. Based on the size and shape of the puncture, the researchers suspect it was made by a fellow Dineobellator, perhaps during a squabble over food or mates.

Dineobellator’s unique combination of strength and agility could have given the animal an edge compared with other dromaeosaurids; its close relative the Velociraptor was a fast sprinter but probably couldn’t turn as easily. It’s likely that Dineobellator took down small, swift creatures and swarmed dinosaurs several times its size such as the hadrosaurids, or duck-billed dinosaurs. Tyrannosaurids like T-rex were probably too slow to catch Dineobellator, but might have routinely stolen their lunch “just due to being able to kind of bully them out of the way,” Jasinski says.

Not everyone, however, is convinced of the new species’ super-powered arms. Sara Burch, a paleontologist at SUNY Geneseo, says more evidence is still needed to show that Dineobellator did indeed have unusually strong limbs.

“I think we need to be careful trying to infer major functional characteristics of the forelimb based on one or two muscles,” she said in an email to Popular Science. “This paper points out some interesting characteristics of Dineobellator in comparison to other dromaeosaurids, but in order to really understand forelimb function in any extinct animal we need to look [at] all the muscles together.”

“We have known for a long time that there were dromaeosaurids in the latest Cretaceous because of preserved teeth,” she said. “Now we are finally finding out what those dromaeosaurids might have looked like.”

The rock surrounding the fossils is 68 million years old, which means that Dineobellator roamed New Mexico not long before the asteroid strike that brought the Cretaceous Period to an abrupt end.

“Some scientists think that dinosaurs in general were declining at the very end of the Cretaceous right before the mass extinction,” Jasinski says. “But this suggests that [dromaeosaurids] were still diversifying and still doing well until the catastrophic event that ended all non-avian dinosaurs.”