Asteroids go to pieces when their host star dies 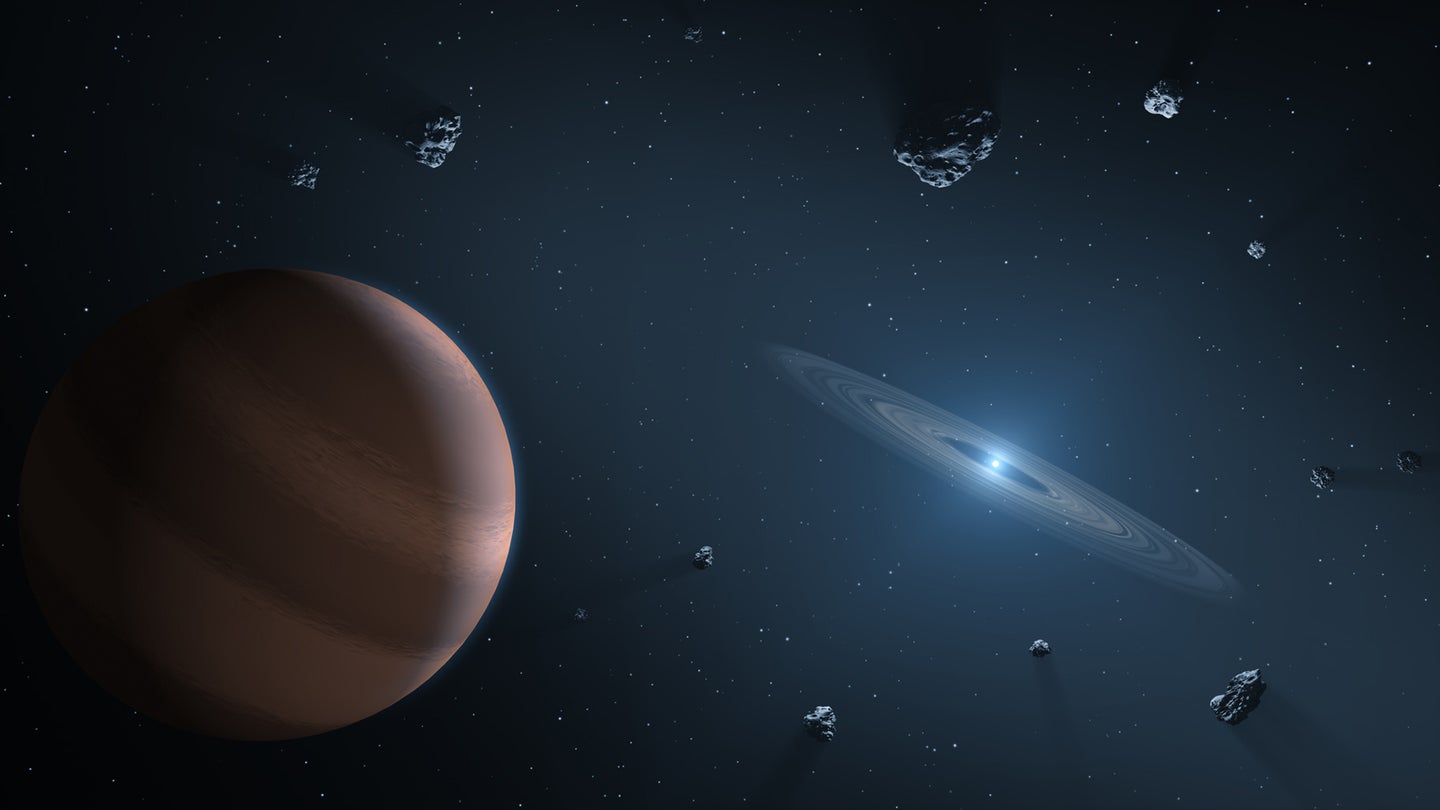 Dense, hot stellar remnants often host rings of dust, gas, and asteroids. A new report helps explain how they came to be that way. NASA/JPL-Caltech
SHARE

When astronomers look out into the galaxy, they find that many star systems fall into one of two types: alive or dead. There are plenty of healthy yellow and red stars hosting planets, not so unlike our solar system. And then there are “dead” white dwarf stars—future versions of our sun—many of which feature disks of dust, gas, and shattered debris. How does a dying star reduce the first system to the second? In part by pulverizing its asteroids with next-level sunlight, recent research suggests.

When the sun someday balloons into a red giant, swallowing Mercury and Venus whole and scorching Earth will be just its first step in transforming the solar system. Because it’ll grow so much larger, our star will also flood space with thousands of times more light than it currently does, like swapping out a lamp for a searchlight. One of the most dramatic effects of this energy abundance will be to spin asteroids into pieces, suggests a recent publication in the Monthly Notices of the Royal Astronomical Society. The phenomenon could explain why astronomers see so many mini-asteroids falling into white dwarf stars.

“In the presence of 10,000-solar luminosity stars,” says Dimitri Veras, an astrophysicist at the UK’s University of Warwick who co-authored the research, “it’s a different—much more violent—ball game.”

While the study of white dwarf stars as planetary systems is a brand new field (researchers discovered the first evidence of a planet orbiting a white dwarf just last year), astronomers have been inferring the swan songs of asteroids diving into the petite but searing stars for quite some time. When a sunlike star dies, it swells, expels a lot of its material, and eventually collapses, cramming a sunlike mass into an Earthlike space. That creates a powerful gravitational field that drags the star’s heavier elements into its center, leaving a pristine atmosphere of hydrogen with some helium. “I think of [white dwarves] as a blank sheet of paper,” says Mark Hollands, an astronomer at Warwick University,

When dirty asteroids full of iron or other metals hit the star and fragment, they leave characteristic streaks noticeable in the white dwarf’s light—which astronomers have seen in between half and a quarter of the Milky Way’s dead stars. But what’s sending all those asteroids to their doom? Veras’s research provides some insight, revealing a system-wide catastrophe that may help create so many asteroids. “It’s a great next step,” says Hollands, who was not directly involved with the study. “It really gives us an improved sense of how we can have such a large population.”

The asteroids’ fates come down to the subtle way light interacts with the rocky bodies. When sunbeams warm an asteroid, that energy is later released as infrared radiation (think of how heat-vision goggles can spot warm humans), causing a recoil that’s miniscule but adds up over time. Because asteroids have funky shapes, they experience recoils in various directions as they later release the heat energy. When those recoils don’t balance, the asteroid starts to spin—a phenomenon known as the YORP effect for the surnames of the scientists who described it, Yarkovsky, O’Keefe, Radzievskii, and Paddack.

Astronomers have observed nearby asteroids YORPing in rather modest ways. After the sun goes super-saiyan, however, everything changes. All that additional light, Veras calculates, will spin any asteroids smaller than 6 miles wide so fast that they break apart. The weakest will start going to pieces when they reach one rotation ever two to three hours, Veras says. Getting them turning that fast from a standstill may take a million years, he estimates. But that’s the blink of an eye for a system that’s lived for billions of tranquil years.

After one fracture, the smaller, leftover pieces will turn even more easily, breaking again and again, faster and faster. In systems like ours, the final relics of many asteroids will be their constituent boulders and pebbles, and the devastation will reach past Pluto’s orbit. “[The asteroid] belt will likely experience ubiquitous YORP-induced destruction,” Veras says.

In previous work in 2014 Veras sketched out the basics of the phenomenon, but the recent research covers a variety of asteroid compositions. The space rocks range in consistency from loose piles of rubble, to firmly attached boulders, to solid chunks of iron, and only the most strongly stuck together appear to survive the end of the solar system. “What’s shown in this work,” Hollands says, is that “during the [red] giant phase, [an asteroid] doesn’t really have much say in what happens.”

The new research also notes that the YORPocalypse will produce many asteroid pairs, where one smaller fragment orbits a larger chunk—something of an orbital novelty. These twins won’t last long though, because further spinning will continue to break them down.

In addition to providing a glimpse into a violent episode of our solar system’s future, the work bolsters researchers’ ability to read the histories of distant white dwarf systems by looking at their atmospheres. As astronomers continue to watch these stars shred any asteroid that gets too close, a better appreciation of the YORP-era conditions the rocks either survived or succumbed to will allow researchers to understand their whole lifecycle, Veras says, birth to death.