The biggest solar telescope ever will help link together and streamline solar physics theories. 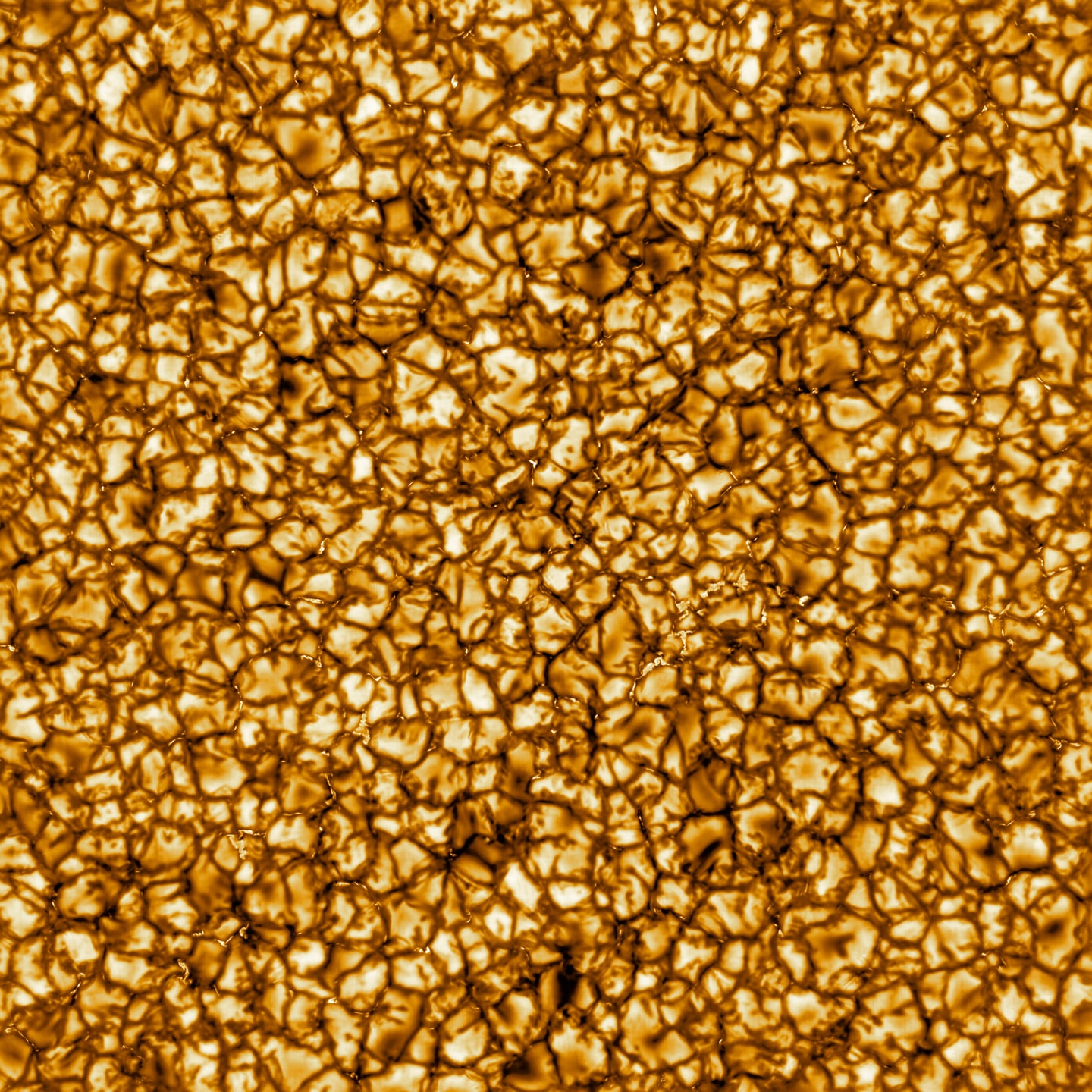 Up close, the sun’s surface boils with blobs the size of Texas—seen here for the first time. NSO/NSF/AURA
SHARE

On November 6, 2017 two storms lashed the Caribbean simultaneously. Hurricane Irma, feeding on the energy of warm seas, unleashed 185 mile-per-hour winds on the inhabitants of St. Martin, Barbuda, and other islands. Meanwhile, a hundred million miles away, a second excess of energy snapped part of the sun’s twisted magnetic field, causing a solar flare that flung x-rays and ultraviolet light toward Earth. At the height of the terrestrial tempest, the solar storm knocked out local emergency channels for about eight hours.

But while meteorologists had known Irma’s path for some time, the intense solar flare—the most powerful of the decade—came largely as a surprise. Researchers understand pretty well how the Earth’s atmosphere interacts with its surface to make rain, wind, and snow, but figuring out exactly how our local star generates “space weather” remains a big challenge. “On Earth they have this huge network of weather monitoring stations,” says Dan Seaton, a solar researcher at the University of Colorado in Boulder. “But on the sun we have some photos, a few extrapolations, and then there’s a lot of guesswork.”

The still under-construction Daniel K. Inouye Solar Telescope (DKIST), which released its first images and movies of the sun’s roiling surface on Wednesday, represents one major effort to narrow that gap. Its 13-foot mirror—three times wider than any other solar telescope—can already spot features no other instrument can. In the near future, the $344 million facility, which sits on Haleakala volcano in Hawaii, will also gauge the twists and turns of the invisible but fierce force that drives space weather: magnetism.

DKIST will help researchers “understand how the magnetic fields behave,” says Gianna Cauzzi, an astronomer at the National Solar Observatory, which manages DKIST. That’s key, she says, for “understanding when certain configurations can go off and why. That will give you a hint [that] there might be something coming.” Knowing that radio channels are more likely to go down, operators could arrange other forms of communication or at least warn others they expect to go silent.

The sun may seem like an unvarying yellow orb from afar, but a zoomed in view reveals a seething mass of swirling currents and rising blobs—more boiling water balloon than shining bauble. Physicists more or less understand how the star’s fusion furnace heats bubbles and sends them up to spill open on the surface, as well as how the wispy atmosphere streams outward. But how does the first lead to the second? The next stage in solar physics, Seaton says, will be to sew these two, largely incompatible pictures together with other models describing the solar wind and the Earth’s magnetic field into one large quilted theory covering the whole system.

And that’s where DKIST comes in. It has the keen vision needed to snap images of the sun in detail previously hinted at only in computer simulations. With its first footage, which researchers have not yet processed for scientific use, the telescope captured a field of Texas-sized boils breaking on the surface. No one knew exactly what these bubbling cells would look like, but to the naked eye the theorists appear to have gotten them mostly right. “I was blown away at how similar they looked to what the models are predicting,” says Courtney Peck, a solar scientist at the University of Boulder, “so I think we’re making a big step forward.”

On top of its massive mirror, the instrument gets additional power from its unique design. All telescopes focus the light they collect into a point to resolve an image, and for DKIST that point actually lies outside of the mirror itself. This configuration keeps all of the supporting optical machinery (such as a formidable cooling apparatus) away from the mirror, where it could otherwise block and scatter incoming light. “We hope it will be revolutionary,” Cauzzi says.

The strategy seems to have paid off. While construction won’t officially end until the summer, Wednesday’s images have already hit the best possible resolution for this wavelength of red light—capturing features 18 miles across. “This is a major accomplishment, as it means that both the telescope and all of the optics downstream do work as expected,” Cauzzi says.

That sharp focus is key to solving the star’s enigmas. Model builders, who try to recreate the behavior of huge phenomena like solar flares in computer simulations, are hungry for the precise data that DKIST promises to deliver. Such predictions change drastically when they vary tiny, impossible-to-see features on the surface, which they currently have to guess at. Together with novel perspectives from an upcoming European spacecraft, Seaton expects that future solar models will benefit from “a lot fewer assumptions and a lot more reality.”

And Wednesday’s images are just the beginning. By the time it becomes fully operational next year, the telescope will feature a total of five instruments capable of collecting colors in both the visible and near infrared parts of the spectrum.

Crucially, those instruments will also be able to resolve the invisible magnetic field lines that thread through the sun’s various layers, because their magnetic influence orients and filters light in recognizable ways. Solar physicists are especially curious to turn DKIST toward the corona, an atmospheric layer 10,000 times dimmer (but paradoxically much, much hotter) than the star’s surface. Eruptions punch through the corona en route to Earth (where they can cause electrical blackouts days later), so the magnetic field there is a crucial and still misunderstood piece of the space weather puzzle. “This is something we don’t have,” Cauzzi says.

Weather of all kinds is inherently chaotic, and just as winter storm forecasts still struggle to get the snowfall right, space forecasters may never be able to predict the exact time and intensity of a communications-disrupting solar flare like the type that hit the Caribbean three years ago. Nevertheless, Seaton suggests that more unified solar theories will help researchers better recognize when the magnetic field is primed to explode, and that DKIST’s unique abilities will contribute to various solar physics advances.

“Any time we have looked at the sun in a novel way, we have been instantly surprised by what we saw,” he says. “And it’s those things nobody expected to see that are going to lead to breakthroughs in deep understanding of how the system actually works.”