The brightest radio flashes in the sky likely come from the universe’s most powerful magnets. 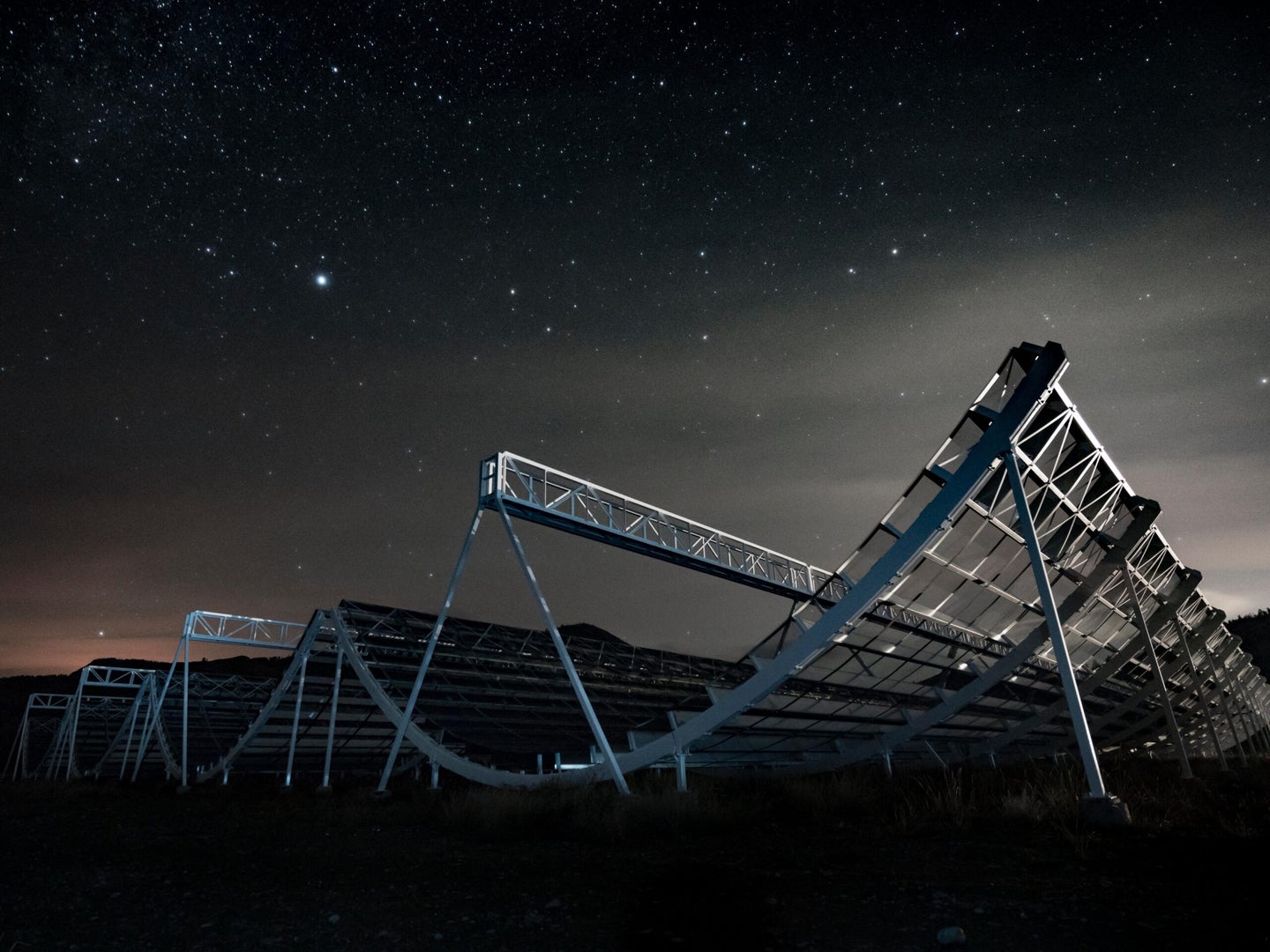 For around a decade, mysterious flashes from deep space have puzzled radio astronomers. The explosions of radio waves last for just a few thousandths of a second, and they appear to shine from galaxies billions of light years away—too far to get a good look at what’s making them. Researchers have detected about 120 such “Fast Radio Bursts” to date, and have come up with nearly half as many explanations. Theorists have floated ideas including exotic stars collapsing, neutron stars crashing into black holes, and even alien civilizations pushing starships around on energy beams.

Now, they may finally have an answer.

In April, researchers spotted a similar radio flash here in the Milky Way, right in our galactic neighborhood. An array of telescopes picked up a violent pulse of radio waves accompanied by bursts of more energetic x-rays all coming from the same place: a highly magnetic collapsed star known as a magnetar. The event, which was described in a series of papers published today in Nature, ties the enigmatic radio explosions with a known member of one of the universe’s most extreme classes of objects for the first time.

“Before this one we have been just guessing, guessing, guessing,” says Bing Zhang, an astrophysicist at the University of Nevada, Las Vegas, and author of a paper reviewing possible fast radio burst (FRB) sources. “This one actually tells us where it came from.”

The message heard round the radio astronomy world went out this year on the morning of April 28, when The Canadian Hydrogen Intensity Mapping Experiment (CHIME)—a radio telescope that has led the recent hunt for FRBs—picked up a formidable radio blip coming from a dense object known to be spewing x-rays. It didn’t quite reach FRB brightness, but seemed energetic enough to be worth a second look. The CHIME team blasted out a notification known as an “astronomer’s telegram” to inform the community.

Many teams heard CHIME’s call, but only one had an instrument custom built to answer it. Chris Bochenek, a graduate student at the California Institute of Technology, leads a dedicated hunt for nearby radio bursts known as the Survey for Transient Astronomical Radio Emission 2 (STARE2). Bochenek and his team set up STARE2 as something of a long shot. On one hand, the three-detector network came relatively cheap at about $15,000 per detector (more sensitive facilities run tens of millions of dollars). You don’t need to squint when you’re looking for a blinding flash. But on the other hand, they expected to be in for a long wait.

“The idea of an FRB happening in [our] galaxy is wild,” he says. “If you take the rates at face value, you’d expect one once every 50 years or so.”

The detection came much sooner than that. CHIME’s morning telegram prompted Bochenek to dig through his daily data, and he immediately found that STARE2 had logged a flash in the same place at the same time. And STARE2′s detection was 1,000 times brighter than what CHIME (which caught the pulse in its peripheral vision) had initially reported. That immense energy just barely qualified the flash as the first plausible FRB from the Milky Way.

“At that point I just froze,” Bochenek says. “This is it. This is what we built this detector for.”

Other groups around the globe continued adding new details to the picture. While only CHIME and STARE2 caught the radio burst, China’s colossal Five-hundred-meter Aperture Spherical radio Telescope (FAST) picked up dozens of subsequent x-ray and gamma ray flares from the same spot. The source was clear: a type of dead star known as a magnetar, roughly 30,000 light years away—basically on our doorstep.

If you need to unleash a tremendous amount of energy in a brief amount of time, you’d be hard pressed to find a better object than a magnetar. They’re a riff on neutron stars—the densest form matter can take before giving up and forming a black hole. They also boast some of the most powerful magnetic fields in the known universe, roughly a billion times more intense than the strongest magnet engineers can create.

When you pack a sun’s worth of mass into a magnet the size of a city, any changes have dramatic consequences. Magnetars, like the Earth, have a crust that might rupture and buckle. And when starquakes crack the crust, the magnetic field may suffer similarly violent upheavals. A tearing and reforming magnetic field could beam out radio waves directly, or a bursting crust could launch eruptions of particles analogous to solar flares, which could in turn cause FRBs.

One detection does not prove that all FRBs come from magnetars, and there are plenty of odd FRB patterns that look too complicated to come from a single quaking neutron star. But the April 28 burst confirms that the objects can explain some, if not most FRBs. “We have enough magnetars in the universe. They burst regularly. They can make enough FRBs to cover everything,” Zhang says.

Since April, this friendly neighborhood magnetar (which is one of about 30 in the Milky Way) has beamed out radio waves about ten more times. No burst has been as energetic as the April 28 event—which in turn was about 30 times dimmer than the weakest known FRB from another galaxy—but the blasts collectively span a vast range of energies. This diversity hints that bright FRBs could represent only the most visible tip of an iceberg of hidden magnetar activity in other galaxies.

“[This range] makes me feel more confident,” says Kelly Gourdji, a radio astronomer at the University of Amsterdam who was not involved with this research. “We’re really bridging that gap between extragalactic radio sources, and sources within our galaxy.”

As astronomers rack up more FRB detections, they’ll try to work out whether all bursts are generated in similar ways. Funky flashes might come from funky magnetars, like those born from neutron star mergers as opposed to collapsing stars. Such subtle distinctions could take many years to discern, but now with the first local example on the books, the challenge seems less daunting than before.

“Before this one I was quite pessimistic regarding finding the sources,” Zhang says, “but with this one, I think this galactic FRB might be the clue.”