Astronomers caught a black hole slurping up a star like spaghetti

The rare moment could teach us about stellar death. 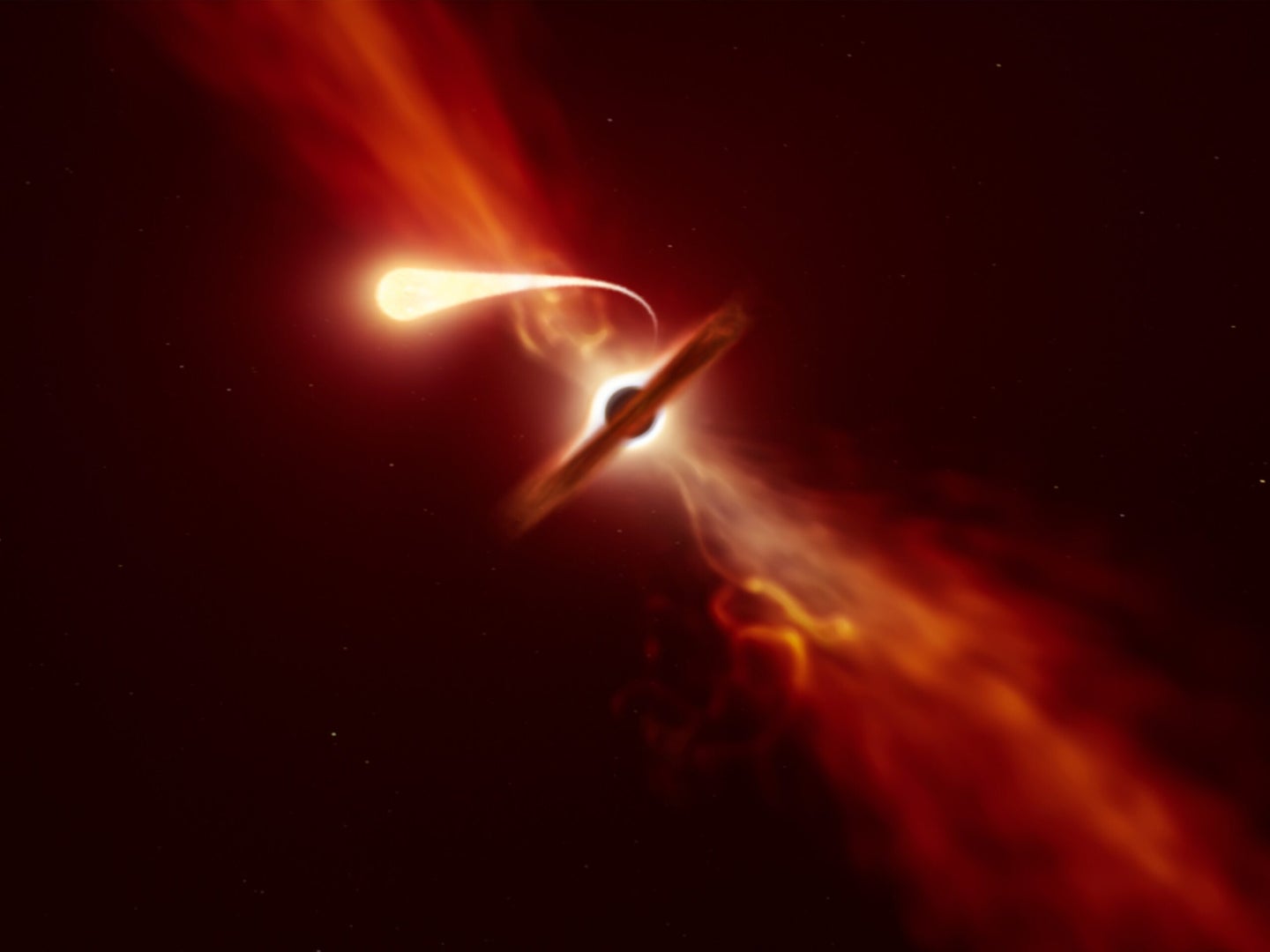 This illustration depicts a star (in the foreground) experiencing spaghettification as it’s sucked in by a supermassive black hole (in the background) during a ‘tidal disruption event’. In a new study, done with the help of ESO’s Very Large Telescope and ESO’s New Technology Telescope, a team of astronomers found that when a black hole devours a star, it can launch a powerful blast of material outwards. ESO/M. Kornmesser
SHARE

When a star ventures a little too close to a black hole, the intense tidal forces suck into it like a giant noodle of star stuff in a cosmic (and much more chaotic) reenactment of that iconic scene in “Lady and the Tramp.” The black hole’s extreme gravitational pull shreds the star into thin strands of material—a process delightfully called “spaghettification.”  When these noodle-like strips get sucked into the black hole, they release a powerful bright flare of energy.

In September of 2019, the light from such a doomed encounter reached Earth. An international team of researchers, using a fleet of telescopes from the European Southern Observatory (ESO), monitored the flare—dubbed AT2019qiz—for a six-month stretch as it grew brighter then faded away. The phenomenon, known as a tidal disruption event, is detailed in a new study published last week in Monthly Notices of the Royal Astronomical Society.

At about 215 million light-years away from Earth, the star’s flaring death throes was the closest such event astronomers had ever observed. “We were prepared—we had telescope time ready on some of the world’s biggest and best telescopes,” says astronomer Matt Nicholl, lead study author and Royal Astronomical Society research fellow at the University of Birmingham. The research team got a front-row seat to just what happens when a star is devoured by a gargantuan black hole, and the combination of the star’s proximity and timing allowed the astronomers to study it in “unprecedented detail,” according to Nichols.

Nicholl and his colleagues caught a glimpse of the star, which was approximately the same mass as the sun, soon after it started getting ripped apart. These powerful bursts of light are often obscured behind a curtain of interstellar dust and debris, according to Nichols, making it difficult for astronomers to study them in greater detail. But this latest tidal disruption event was discovered shortly after the star had been “spaghettified,” allowing researchers to study it before that curtain of dust and debris had fully formed. “It seems to have paid off because we really got a great look at this thing,” Nicholl adds.

Researchers observed this act of stellar cannibalism through ultraviolet, optical, X-ray, and radio wavelengths. With this vantage point, researchers could parse out that about half of the star’s mass was slurped by the black hole, which is over a million times bigger. The other half was simultaneously ejected outward into space.

Nicholl adds that the flare the star sends as its dying gasp in this particular event reached its maximum brightness particularly quickly. “It took about a month after encountering the black hole,” Nicholl says. “These faster ones are harder to find, so it suggests that there might be a lot of these short-lived flares that have escaped our attention until now.”

Going forward, astronomers hope their detailed observations of this incredibly destructive event can help us learn more about how black holes and matter interact. “The next step is to try and find lots more of these events and observe them in the same level of detail,” Nicholl says. “We can see if what we found for this one holds true for all of them.”