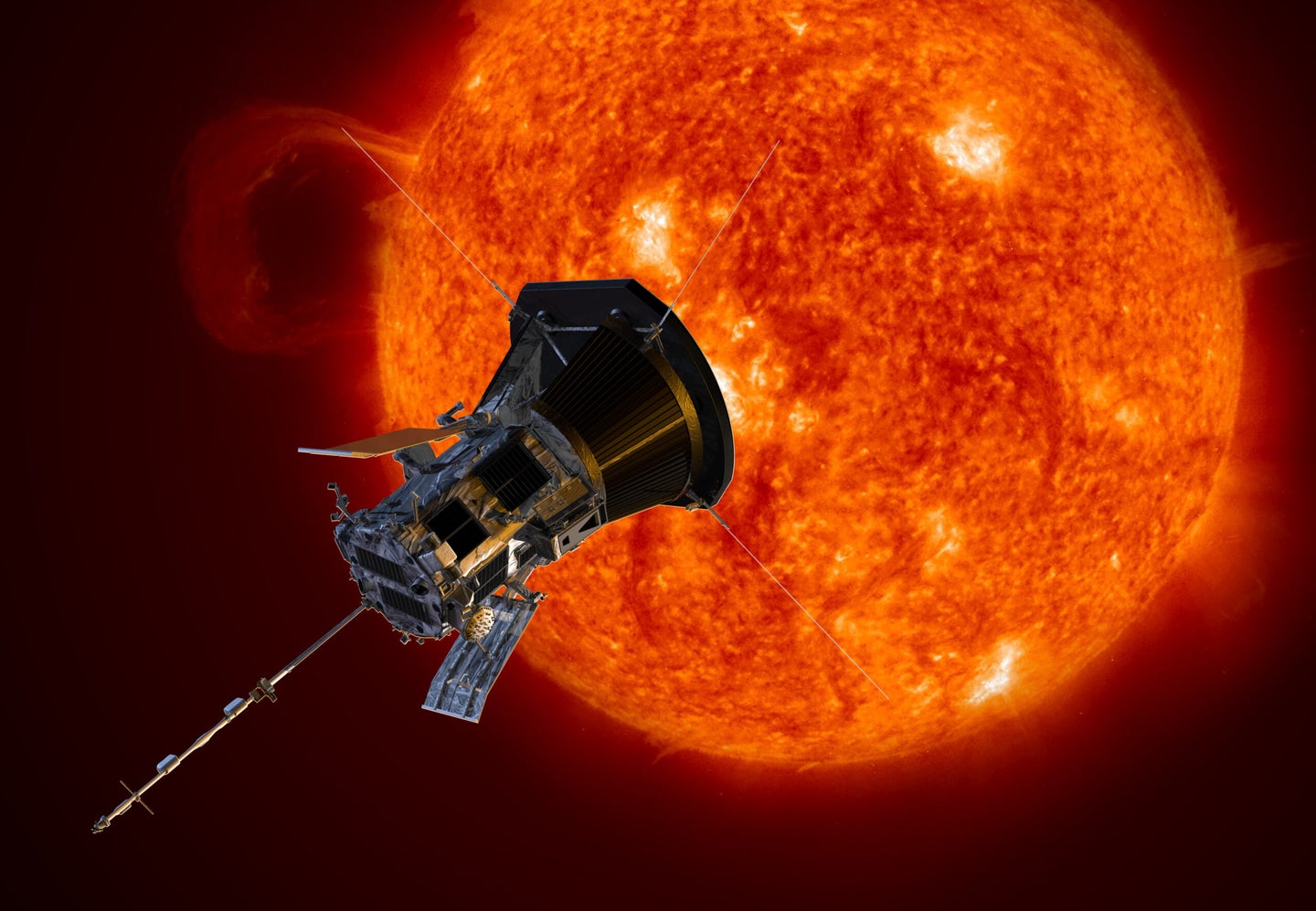 The sky is full of stars, but only one sits within our reach. Even as close as it is, the sun poses plenty of mysteries that can’t be solved from Earth. Odd patterns in sunlight during solar eclipses suggest that the corona, the sun’s outermost bit of atmosphere, inexplicably burns hundreds of times hotter than its surface. And while researchers can catch whiffs of the solar wind—streams of charged particles emanating from the sun—here on Earth, a lot of valuable data washes away by the time it blows by us. Getting measurements from right up next to the sun is a better way to understand our giant, burning ball of gas.

That’s why NASA’s Parker Solar Probe has spent the last year swooping closer and closer to the sun. In its first two passes it encountered new features that may help explain both the corona’s extreme heat and the origins of the solar wind, researchers announced on Wednesday in a series of four publications in Nature. As humanity’s first close encounter with a stellar environment continues, further observations will help researchers better understand how solar weather affects Earth, as well as how all stars age and die.

“We needed to go right to the source,” said Nicola Fox, director of NASA’s Heliophysics Division in a press conference on Wednesday.

In November 2018 and April of this year, two of Parker’s orbits brought it closer to the sun than any spacecraft had been before. Diving toward the sun and looping around the back, the probe reached about 15 million miles from the star’s surface—roughly six times closer than the distance between the sun and the Earth. At the shortest parts of its dive, the probe matched the speed of the sun’s rotation, in effect hovering above its surface. “We just sit over it, and let that part of the sun kind of wash over us,” says Kelly Korreck, head of Science Operations for one of Parker’s instrument suites that measures the solar wind.

Up close, the sun’s magnetic field and solar wind are both much more intense compared to what researchers can measure here on Earth, giving Parker an alien environment to explore. Korreck likens the craft’s experiences in the strong magnetic field to those of a diver entering the sea. “It’s kind of like going underwater,” she says. “Things sound different. You get different physics effects.”

Two features in particular came as surprises. The first were what the researchers are calling “rogue waves” in the magnetic field, which Parker registered as spikes in intensity and reversals in direction lasting for seconds to minutes as they rolled over the spacecraft. Dubbed Alfvén waves after Hannes Alfvén, a Swedish plasma physicist who won the 1970 Nobel prize in physics for their description, the phenomenon had been observed from Earth but never with such strength.

By observing the movement of electrons, which outline features in the magnetic field, the researchers confirmed that these waves represented tsunamis roaring outward from the sun—Parker saw as many as 1,000 speed by during an 11-day period of nearest approach. Their unexpected energy lends preliminary support to the idea that they could play a role in the peculiar heating of the corona. “It’s spectacular stuff and I’m quite sure it’s telling us something fundamental,” said Stuart Bale, the principal investigator of the instrument suite responsible for measuring the magnetic field, in the press conference.

The next step, according to Korreck, will be to monitor the rogue waves during closer approaches as the solar cycle heats up and the sun gets more active. Then, researchers could calculate whether they really are forceful enough to power the whole corona. “It’s going to take years,” she says.

Another surprise came when Parker measured the speed and direction of the solar wind buffeting the spacecraft. Astrophysicists expected that at this distance, 35 to 50 solar radii away from sun, the wind would come streaming straight outwards. Instead, they found that it was blowing to the side at over 100,000 miles per hour—presumably as the sun’s rotation drags the jetstream along. Researchers knew the wind would blow sideways in the corona, which is locked in sync with the sun’s rotation. But the edge of the corona lies ahead of Parker, somewhere between 10 and 30 solar radii from the sun.

Figuring out what kind of magnetic friction might be pulling the solar wind askance will prove key to understanding the future of not only our sun but stars in general. A star’s spinning speed slows down over time because its magnetic field rubs against the outflowing solar wind, causing it to lose rotational energy. So a tighter connection between the sun and its magnetic field suggests that this “spin down” process may play out more quickly than expected.

Knowing that the solar wind blows off the sun at such a sharp angle will also improve our ability to forecast when powerful pockets of energy from solar flares and plasma eruptions will reach Earth, where they can damage satellites and cause power outages. Ignoring this sideways component of the wind would be like ignoring crosswinds in predicting where a hurricane is making landfall, said Justin Kasper, who collaborates with Korreck on the instruments measuring solar wind, in the press conference “It’s already pointing to a way to improve space weather forecasts.”

The new research contains a variety of other results, including hints of a long-theorized dust-free zone around the sun, and an array of magnetic field structures and solar breezes far too small to be seen from Earth, and the researchers stress that this data is just the beginning. Over the next six years Parker will use further encounters with Venus to hurl itself closer and closer to the sun, eventually penetrating the corona itself for a direct look at the sun’s most mysterious layer. Fortunately, solar physicists are used to being patient.

“We’ve waited for decades and decades to understand these mysteries, some of them have been around for hundreds of years,” Fox said. “We’ve waited for tech to mature so we could actually fly this daring mission and get these observations.”