Fast Radio Bursts may flash with some rhyme and reason. 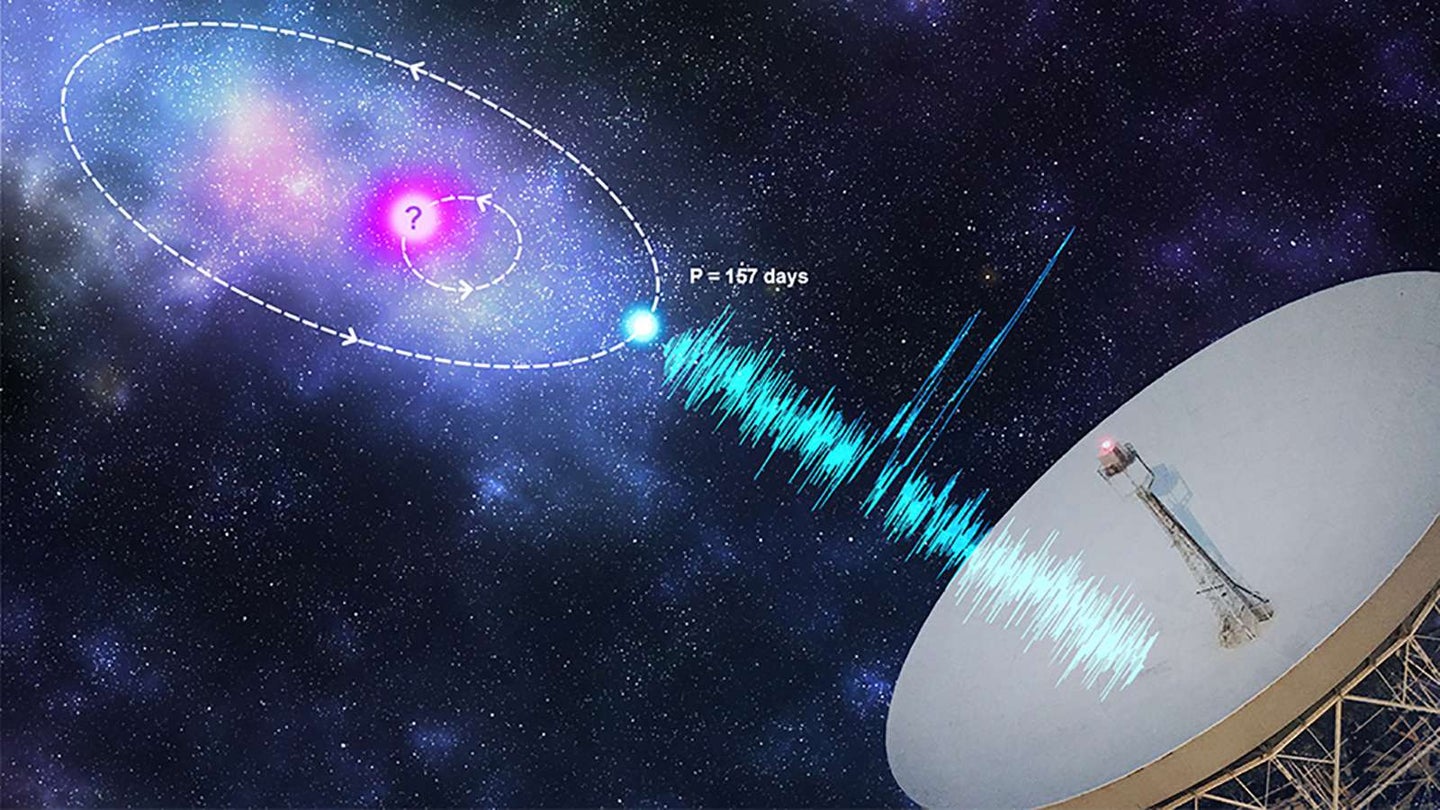 The Lovell Telescope in the UK has found 32 bursts from deep space, helping a team of astronomers uncover a pattern in their flashes. Kristi Mickaliger
SHARE

Astronomers have spent six years watching an unknown object a million, billion light years away explode again and again. They still don’t know what’s expelling the violent bursts of energy, but one team thinks they’ve figured out at least when the extragalactic pyrotechnics are likely to go off. If they’re right, the object will be shooting out flares all summer long—potentially providing a string of new hints to one of the greatest mysteries in modern astronomy.

“Every pulse is telling you something new,” says Kaustubh Rajwade, an astronomer at the University of Manchester in the UK who helped uncover the new pattern. “If we had stopped at 10 pulses, we wouldn’t have seen this.”

In the late 2000s and early 2010s astronomers began to notice flashes of radio waves dotting the sky. Each speck marked a potentially catastrophic outpouring of energy on par with what the sun produces over decades but compressed into a few thousandths of a second. Whatever was causing the Fast Radio Bursts (FRBs), as they came to be called, must be some of the universe’s most dramatic explosions. Theorists let their imaginations run wild, considering distant supernovae, neutron star collisions, and even alien spacecraft.

Then came the repeat acts. In 2015, astrophysicists picked up ten additional FRBs from a point in deep space that had first flashed in 2012. That object, whatever it was, had apparently survived to burst again. And again. And again. Radio telescopes racked up dozens, and then hundreds of detections from this prolific emitter. It flashed seemingly at random, sometimes giving off back-to-back flickers just tenths of a second apart, and sometimes spacing its bursts out by days or even months. Nearly twenty of the roughly hundred known FRB sources have since revealed themselves to be “repeaters,” most of which were discovered in the last year by astronomers working with the Canadian Hydrogen Intensity Mapping Experiment (CHIME) telescope.

Of that group, the CHIME collaboration observed just one source flashing with a detectable pattern, a sixteen-day cycle of alternating active and quiet periods. Theorists hungry for concrete information seized the figure, suggesting that 16 days might match the wobbling of a magnetized neutron star as it spins, the bursts becoming visible when it points toward Earth.

Now Rajwade and his collaborators have detected a second possible pattern, this time in the original 2012 repeater. They detailed their findings in May in the Monthly Notices of the Royal Astronomical Society.

The team devoted as much time as they could get on the Lovell Telescope in the UK to staring at the original repeater, which amounted to about 120 hours scattered sporadically over four years. During those precious hours, the repeater gave off 32 brief bursts, enough for the pattern of behavior to become clear when Rajwade analyzed it last fall. “I just basically plotted my data,” he says, “and immediately the pattern came out visually.”

After gathering 250 additional flashes from published data spanning six years, Rajwade felt confident he had enough evidence to make the case that the repeater acted regularly. The source flashes at random times for 90 days straight, he calculated, then goes silent for 67 days. Next the cycle repeats—making for a 157-day period overall. The source should have switched on for three months of bursting, the group predicts, on June 2.

But the finding remains unconfirmed for now. Due to telescope maintenance and fierce competition for observing time, the group’s 120 hours of observing happened to fall largely during periods when they now understand the repeater to have been “switched on,” possibly throwing off their results. They’ll need regularly spaced follow-up observations to see if the source truly keeps to their inferred timetable.

“There’s definitely something interesting going on here, everyone can agree on that,” says Kelly Gourdji, a radio astronomer at the University of Amsterdam who was not involved with this research. “But we’re going to have to look to the larger data sets to confirm and to refine.”

Other FRB researchers share her enthusiasm for the work ahead. “It’s really exciting stuff and it’s good for the global community to push forward on this,” says Emmanuel Fonseca, an astronomer at McGill University and member of the CHIME collaboration. “These sorts of discoveries really restrict things to the point where we might someday have a solid picture for what these things are.”

The lengthy 157-day period (as opposed to the other repeater’s 16-day cycle) offers a new clue as to what could be emitting the bursts, hinting at something slower than the wild spinning and wobbling of a lone neutron star. “It becomes difficult to explain this intrinsically,” Gourdji says.

The new pattern more strongly supports theories depicting separated objects periodically messing with each other from afar. “My guess would be an orbital system,” Rajwade says. “The FRB is actually coming from a compact object like a neutron star, but it could be orbiting pretty much anything: a massive star, a black hole, right now everything is on the table.” FRBs may also have various origins.

What he’d really like to know is whether additional patterns are hiding in the chaotic flickers of the other known repeaters, because astronomers will need more examples to draw firm conclusions. It took half a decade of careful observation to uncover the half-year period of the original repeater. If other FRB sources have slower cycles, those will be even harder to tease out. Only by assembling larger collections of the radio bursts will astronomers start to discern what’s really going on in these galaxies far, far away.