The action goes down in the sun’s chromosphere. 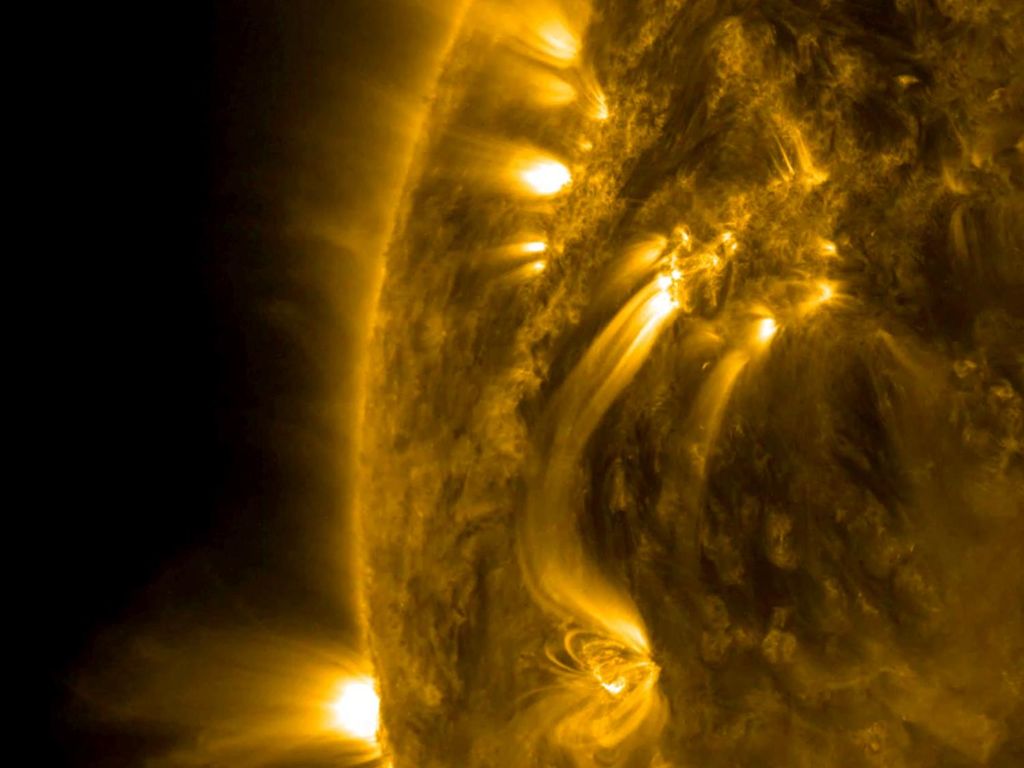 A battle rages on the surface of the sun. Wavy spikes shoot up to thousands of miles high, while plasma bombs explode at the edges of sunspots. Now, solar researchers may have observed another weapon in our nearest star’s arsenal: Texas-sized balls of heat and light.

These spheres streak through the plasma between the sun’s surface and corona (atmosphere), according to a recent report in the Astrophysical Journal Letters. The heliophysicists who made the observation christened them “cannonballs” because they trace out arcs as they fly (and, presumably, because it sounds super cool). The unconfirmed phenomenon could help explain the ungodly temperatures found in the sun’s upper atmosphere, among other mysteries of plasma physics.

The action goes down in the sun’s chromosphere, which starts where the photosphere (the part that will blind you) ends, and extends to the corona (the wispy atmosphere visible during an eclipse). Exactly how this transition zone works remains unknown, however, with the temperature inexplicably rising from a cool 10,000 degrees F to a sizzling few million degrees over the course of just thousands of miles.

“It’s still a big problem why the temperature changes so fast,” says Xiaohong Li, a PhD student at China’s National Astronomical Observatories and co-author of the work. “This is the problem that all the [solar] physicists are trying to solve.”

Li and her collaborators got to know this enigmatic layer of plasma intimately by binging dozens of hours of footage taken by various high-resolution solar telescopes, focusing on a particular shade of scarlet light emitted by the chromosphere’s hydrogen. For six months, the team downloaded videos every day and scoured them for clues. “Anybody could have found it,” Li says. “People don’t spend so much time focusing on the small details.”

When Jun Zhang, a professor at the National Astronomical Observatories, spotted the first flying cannonball in footage from a solar telescope at the Fuxian Solar Observatory the spring of 2018, he suspected it was just a blip in the recording. After a month of searching through the telescope’s archives, however, he found a second example. Only after the team had amassed a handful of these events, he says, did he start to get excited. They eventually found 20 cannonballs, and estimate that perhaps 40 of the spheres sail through the chromosphere at any given time.

The blobs, which measure about 700 miles across and fly at about 125,000 miles per hour, represent an abundance of heat and energy. The researchers propose that the sun’s magnetic energy launches the cannonballs in a violent but poorly understood event known as reconnection. The roiling surface of the sun sends powerful magnetic fields arcing up into the chromosphere, and when two arcs oriented in different directions smash together they can abruptly snap, then link together in a new orientation. Higher in the atmosphere, more energetic versions of these explosions trigger solar flares and coronal mass ejections. When the team cross-referenced their video clips with high level magnetic field images from NASA’s Solar Dynamics Observatory, they found rough support for the theory that reconnection was powering their cannonballs, sending them along the arc of the magnetic field.

Other solar scientists, however, say that without detailed magnetic measurements, cannonballs may not merit their catchy moniker. Any feature too small to resolve clearly can appear spherical, and without real height data their rising and falling behavior remains speculative, according to Michiel van Noort, a heliosphere scientist at the Max Planck Institute for Solar Research. He wonders whether the features may not be actual blobs of physical material flung from the surface, but rather garden-variety waves rolling through the chromosphere’s plasma. Such plasma pulses wouldn’t require anything as exotic as reconnection to get going, he says.

Marco Velli, a solar physicist at UCLA and observatory scientist on NASA’s current Parker Solar Probe mission, has similar questions. The cannonballs’ speeds are close to those of plasma waves in the chromosphere, he says, and without more examples it’s hard to tell the two apart.

He finds the results intriguing, however, and hopes follow-up research—perhaps using artificial intelligence to conduct a wider survey of solar footage—will turn up more cases to study. If further scrutiny does prove that magnetic reconnection causes cannonballs, they would serve as an important window into how reconnection takes place in calm, comparatively low-energy environments. A better understanding of how reconnection shoots energy and material into the sun’s atmosphere would also help us figure out how much the phenomenon contributes to the corona’s heating.

Physicists need every insight into reconnection they can get, Velli stresses, and not only to understand the sun. Lacking a detailed understanding of reconnection is also the main showstopper when it comes to producing energy from nuclear fusion, where reactors need strong, stable, non-reconnecting magnetic fields to keep plasma under control. “[Reconnection] is a universal process,” he says. “It’s important.”