A car-sized spacecraft just blasted off toward the Sun 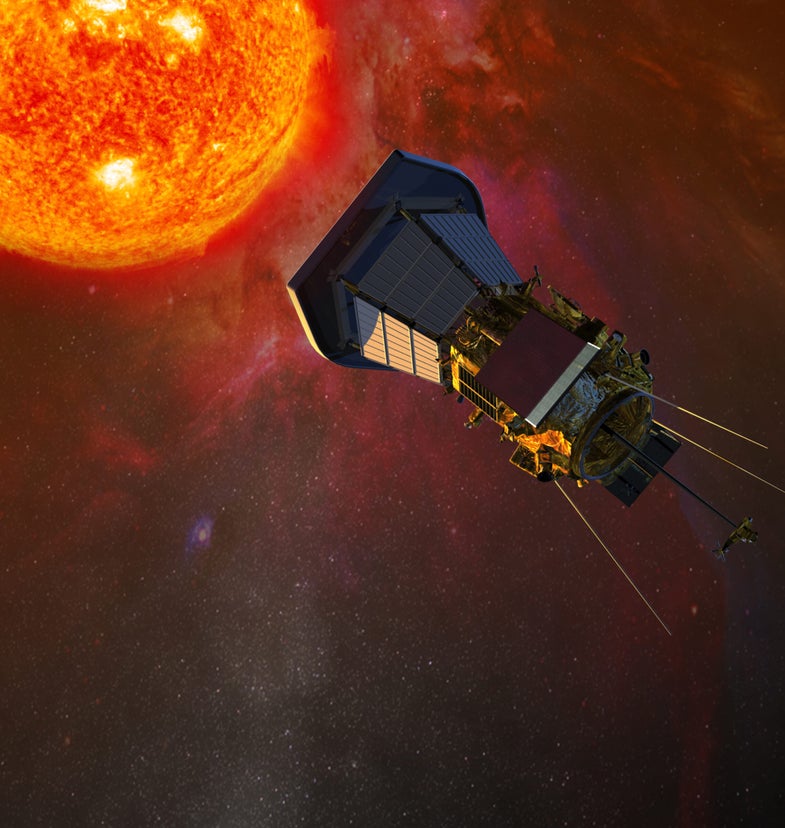 Update 8-11-18: Issues were identified during the countdown to launch on Saturday morning, and the 65 minute launch window closed before they were resolved. They’ll attempt to launch again on Sunday around the same time. Original article continues below.

Just like beachgoers looking to get a tan, NASA has its own date with the sun this summer. If all goes well, at 3:33 a.m. on Saturday, August 11, the agency will launch the Parker Solar Probe on a seven-year journey to get closer to the sun than any other man-made object. The mission will see the car-size spacecraft rendezvous with the corona, the outermost layer of the sun’s atmosphere, located several million miles from the surface of the star.

After slingshotting around Venus, the probe itself will get within 3.8 million miles of the surface of the sun, dipping into the corona to perform a series of experiments aimed at studying three major solar mysteries: how the electric and magnetic fields in the corona impact solar wind, what causes energized particles to accelerate into space, and why the corona is hotter than the surface of the sun (by several million degrees Fahrenheit).

While scientists have long studied solar wind—the flow of charged plasma from the sun that not only creates the aurora when it hits the Earth’s magnetic field, but also disrupts communications systems—they don’t quite know how that material is accelerated to supersonic speeds reaching over one million miles per hour. It’s been theorized that this occurs in the corona, thus the Parker Solar Probe and its suite of instruments (more on that here) will be perfectly situated to observe the turbulent energy patterns upon its arrival at the sun.

The spacecraft will also look for huge specific events that occur in the corona to dramatically propel the energized material out into space. “We’re interested in how powerful shock waves driven outward from the sun by massive eruptions of solar material, known as coronal mass ejections, can accelerate charged particles to the extreme energies measured by spacecraft located near Earth’s orbit,” says Rob Decker, Parker Solar Probe deputy project scientist at the Johns Hopkins Applied Physics Lab. “As these shock waves pass over Parker Solar Probe, its instruments will measure the properties of the shock waves and of the charged particles in the early stages of the energization process.”

The Parker Solar Probe will also study the intense temperatures in the corona. The surface of the sun is a relatively cool 7,000 degrees Fahrenheit, while the plasma in the corona spikes up to several million degrees Fahrenheit—a bit of a puzzle, since the sun’s energy originates in its core, and we’d expect the heat to lessen as the distance from the core increases. “Since Parker Solar Probe will pass through this hot corona at a minimum distance of only nine solar radii [the solar radius is 432,300 miles] above the Sun’s surface, instruments on the spacecraft should detect remnant signatures of the prominent coronal plasma heating process,” says Decker.

Of course, as the probe must withstand these intense temperatures, new technology had to be developed to protect the sensitive instruments—a process that essentially took six decades. The mission’s roots can be traced back to 1958, when astrophysicist Eugene Parker, for whom the probe is named, published a paper theorizing the existence of solar winds, which had never been recorded or measured. (His theory was proven correct just two years later.) Since then, scientists longed to send a probe to study the sun. “The technology development took several decades to catch up with scientific aspirations,” says Decker. “The thermal protection system (TPS) and the actively cooled solar arrays designed and developed for and installed on Parker Solar Probe are key examples.”

Not only will the plethora of data that the Parker Solar Probe will send back to Earth excite sun researchers, but it will also have major implications for the future of human spaceflight. The energized particles that hit the Earth after intense solar activity create radiation hazards that detrimentally impact human bodies (say, astronauts aboard the ISS, or eventually astronauts on Mars), as well as sensitive electronic equipment on spacecraft. “The eventual goal is to predict when the explosive solar events (such as solar flares and coronal mass ejections) that produce these particles will occur,” says Decker. “Measurements from Parker Solar Probe should help us understand what subtle signatures of activity on the Sun are actually precursors of impending solar eruptions.” If we can predict such solar activity in advance, hopefully we’d be able to provide warnings to crewed missions—much in the same way radar and satellites help us track Earth’s weather systems.

While each orbit of the Parker Solar Probe brings the it closer to the sun, we have some time to wait for the results—the spacecraft won’t enter the corona until its 22nd orbit in 2024. It will, however, start sending back data on its first approach in November this year, hopefully leading to early discoveries. Till then, we’ll just have to keep our eyes on the launch.