Researchers built super-sensitive chambers inside of mountains to study our host star. 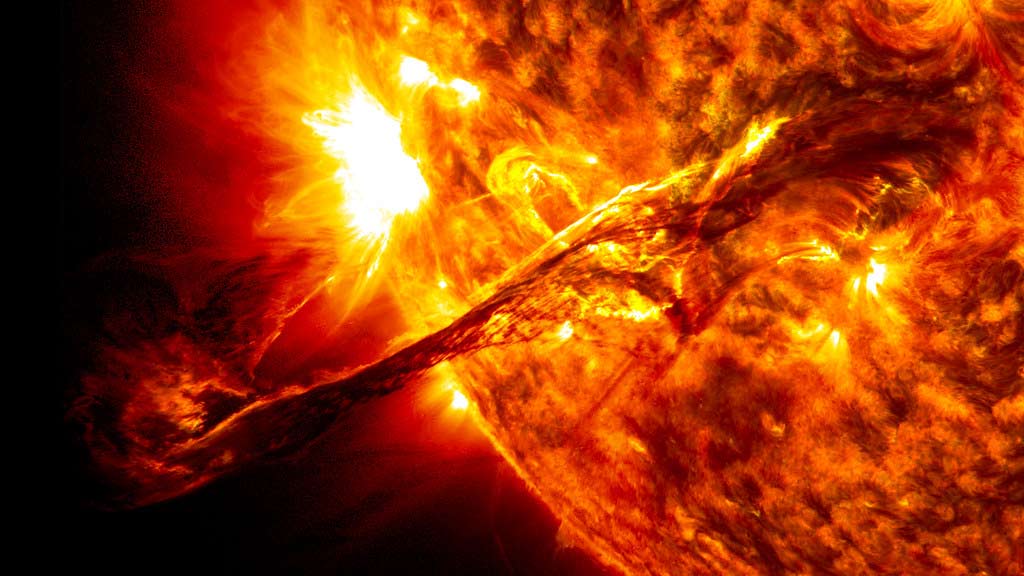 On August 31, 2012 a long filament of solar material that had been hovering in the sun's atmosphere, the corona, erupted out into space at 4:36 p.m. EDT. The coronal mass ejection, or CME, traveled at over 900 miles per second. The CME did not travel directly toward Earth, but did connect with Earth's magnetic environment, or magnetosphere, causing aurora to appear on the night of Monday, September 3. Pictured above is an overlay blended version of the 304 and 171 angstrom wavelengths. Cropped. Credit: NASA/GSFC/SDO NASA image use policy. NASA Goddard Space Flight Center enables NASAís mission through four scientific endeavors: Earth Science, Heliophysics, Solar System Exploration, and Astrophysics. Goddard plays a leading role in NASAís accomplishments by contributing compelling scientific knowledge to advance the Agencyís mission. Follow us on Twitter Like us on Facebook Find us on Instagram.
SHARE

When the sun warms your face, it’s shooting more than just sunbeams at your skin. Neutrinos—ghostly particles with just a trace of mass—come along for the ride. Many trillions of them enter your body each second and carry right on into the ground, whizzing through the planet at nearly the speed of light.

Scientists have spent years scrutinizing this barrage of neutrinos, trying to understand precisely how the sun makes and launches them. While 99 percent of the sun’s energy comes from one type of fusion, the remaining one percent has long been thought to come from a second, more complicated reaction. And after decades of experimental wizardry, physicists have detected the neutrinos coming from this rarer reaction for the first time.

“This represents a smoking gun,” says Marc Pinsonneault, an astronomer at The Ohio State University who was not involved. It’s “a really beautiful confirmation of a very deep theoretical prediction.”

In those modest handfuls of neutrinos, researchers hope to eventually discern the answer to one of astronomy’s more heated questions: what ingredients make up the sun, and by extension, all the other stars in the universe?

Researchers know that the sun is at least 98 percent hydrogen and helium, nature’s two lightest and most abundant elements. But debate rages over the makeup of that final two percent. Astronomers usually figure out what objects are made of by analyzing which colors of light they emit (or don’t emit), but when it comes to some of the sun’s heavier ingredients—such as carbon, nitrogen and oxygen—their fingerprints just don’t shine through clearly.

“The problem isn’t the data,” Pinsonneault says. “It’s an accident of the periodic table.”

When observations fell short, researchers turned to theories. Early models predicted that the sun should be 1.8 percent bulky atoms such as carbon, nitrogen, and oxygen. But then in the 2000s, more sophisticated theories incorporating the sun’s churning and other features predicted that just 1.4 percent of the star should be heavyweights.

Half a percent difference might not sound like much, but it has cosmic consequences. Since the sun is the best-known star, astronomers use it almost as a unit of measurement. Another star of similar appearance, they assume, should have the similar composition. And when you multiply by all the stars in the universe, half a percent adds up fast. If the lower estimate is correct, for instance, that would cut researchers’ estimate for the amount of oxygen in the entire cosmos by 40 percent.

“When you change the sun, you change how much [heavy stuff] we think there is everywhere,” Pinsonneault says.

One way to really get a handle on what’s going on inside the sun is to study the countless neutrinos that it blasts through Earth every second. In our star, the vast majority come from the direct fusing of protons. But nuclear physicists predicted in the late 1930s that a few should originate from a complicated reaction where precisely the heavy elements in question—carbon, nitrogen, and oxygen—help guide protons together.

The hunt for the so-called “CNO neutrinos” began in 1988. All nuclear reactions spray neutrinos, so if you’re looking the few that come from a rare nuclear reaction millions of miles away, first you have to prepare a squeaky-clean nuclear environment. Members of the Borexino collaboration in Italy started by developing the technology to purge the materials from which they would build their detector of polluting radioactive ingredients. The effort took 19 years.

“It is probably the purest environment in terms of radioactivity on Earth,” says Gioacchino Ranucci, a Borexino member.

Even then, the detection didn’t come easily. The researchers built Borexino deep under a mountain, away from cosmic rays, in Italy’s national laboratory at Gran Sasso. A three-hundred-ton chemical brew forms the core of the detector—which flashes on the extremely rare occasion that a neutrino interacts with the liquid. Another 1,000 tons of the same concoction envelops the core of detector, and 2,300 tons of water surround the whole apparatus, shielding it from gamma rays and neutrons spit out by the rocks of the Gran Sasso mountain.

The experiment switched on in 2007, detecting neutrinos from the sun’s main type of fusion almost immediately. Over the next few years, researchers probed every aspect of the standard proton-proton fusion. CNO neutrinos, however, remained out of reach.

In 2015, they revamped the detector to keep the liquid in the core completely still, and, finally, their efforts have paid off. In June, the international collaboration of about 100 researchers announced that after eliminating all other possible sources they were at last detecting CNO neutrinos. Each day, the central 100 tons of liquid flashes about 20 times on average. Ten come from radioactive decay in the detector materials, and in this particular energy range about three come from the sun’s main fusion reaction. The remaining seven flashes, Ranucci says, mark the arrival of neutrinos launched by the sun’s rare instances of CNO assisted fusion. The team published their results today in Nature.

“This is a beautiful, beautiful experiment,” Pinsonneault says.

Taken together, those seven daily flashes give the slightest of hints that the sun—and therefore the universe—might have more carbon, nitrogen, and oxygen rather than less. But even after decades of toil and a tour-de-force measurement, the evidence is not conclusive. “We have a preference for high [abundances of heavy elements],” Ranucci says, but “it could be a fluke.”

The Borexino experiment will continue to search for flashes of CNO neutrinos for a few more months, after which the lifetime of the detector will end. Ranucci looks forward to publishing one more CNO neutrino paper with an additional year and a half of data, which may offer a somewhat firmer answer.

Regardless of how much the Borexino collaboration can squeeze out of the machine’s final days, Pinsonneault says that solar physicists are working on additional experiments that might get at the sun’s contents in other ways. And, failing that, even bigger vats of liquid are on the way. None are yet taking data, but after decades of watching Borexino’s development, solar physicists are accustomed to being patient.

“It does not close the door on one or the other branches of the solution, Pinsonnault says, “but it does point the way toward future generations that may be more decisive.”