The gas giant orbits a pair of stars in a far-off system. 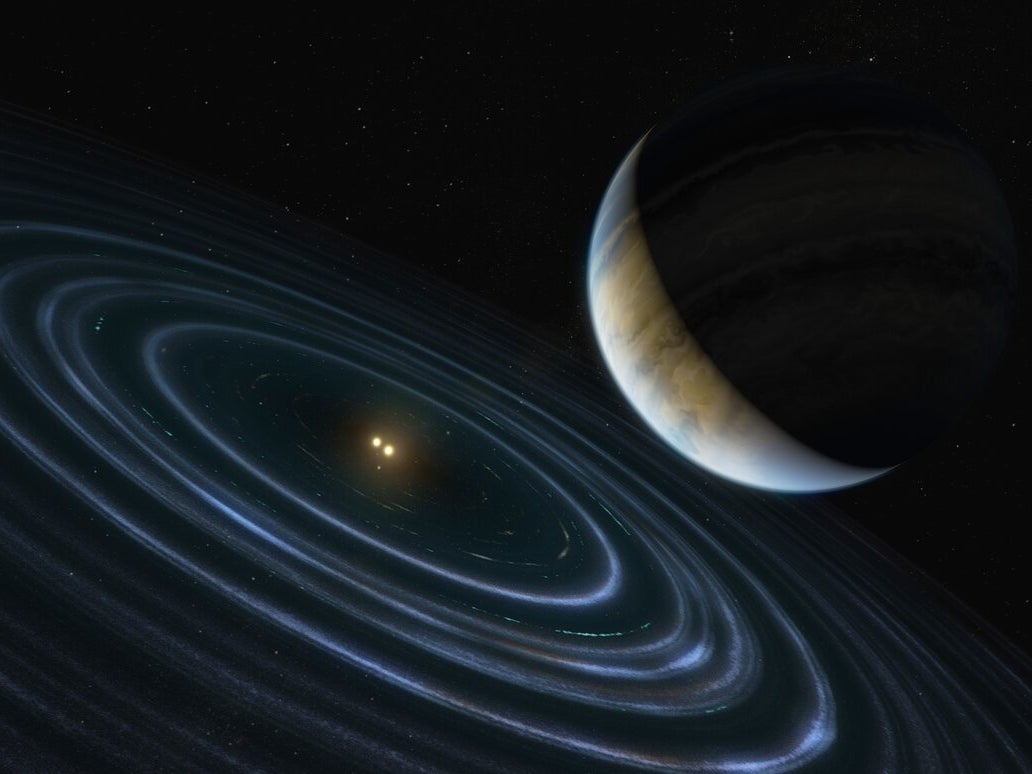 This 11-Jupiter-mass exoplanet called HD106906 b occupies an unlikely orbit around a double star 336 light-years away and it may be offering clues to something that might be much closer to home: a hypothesized distant member of our Solar System dubbed “Planet Nine.” This is the first time that astronomers have been able to measure the motion of a massive Jupiter-like planet that is orbiting very far away from its host stars and visible debris disc. ESA/Hubble, M. Kornmesser
SHARE

Some 336 light-years from Earth, a giant exoplanet circling a pair of stars may offer clues to a mystery closer to home.

The massive gas world—HD 106906 b—clocks in at 11 times the size of Jupiter, and sits mind-bogglingly far away from its host twin stars at 730 times the distance between the Earth and the sun. According to a paper released last week in the Astrophysical Journal, the distant world could help scientists learn more about whether there is a large Planet Nine lurking in the far edges of our own solar system.

The exoplanet was first discovered in 2013, but it took Hubble’s accurate measurements (and looking back at the planet’s movements over a 14-year period) to pinpoint its bizarre elongated and inclined orbit. HD 106906 b is far from its stars—one orbit, its “year,” is equal to 15,000 years. As the planet advances at a snail-slow pace around its stars, measuring “even a fraction of that orbit requires ultra-precise measurements of its position and motion,” says astronomer Meiji Nguyen, of the University of California-Berkeley, who led the study.

Nguyen says it’s as if Jupiter traveled beyond the Kuiper Belt—a region of mainly icy, dusty debris, around the outskirts of our solar system. If Planet Nine exists, this is how it might orbit the Sun. “The fact that we’ve found a system that behaves like this in nature shows that the Planet Nine scenario is possible and could potentially happen very early on in the evolution of a stellar system,” says Nguyen.

The hunt for the hypothetical Planet Nine has stirred the scientific community. In the past decade, many astronomers have proposed that odd orbital arrangements of objects beyond Neptune mean the existence of a world that has yet to be observed, or possibly some heavy exotic object like a primordial black hole might be lurking out there.

It’s not certain how HD 106906 b achieved such a distant and strangely inclined orbit like we believe our own Planet Nine might have. The prevailing theory, and the one researchers proposed in the new study, is that it formed much closer to its host stars, about three times the distance that Earth is from the Sun. Drag within the system’s gas disk could have pulled it inward toward its stellar duo, Nguyen says. Then, the combined gravity from the whirling twin stars kicked it out onto an eccentric orbit that almost threw it out of the system and into the void of interstellar space, but a passing star may have stabilized the orbit and prevented the world from becoming a rogue planet.

According to researchers, a similar scenario may have played out in the early days of our Solar System to form the mysterious, much sought-after Planet Nine. Its interaction with our giant planets early on in our solar system’s history punted Planet Nine into the boondocks, after which passing stars in our local cluster likely put the brakes.

“The planet’s orbit is very inclined, elongated and external to a dusty debris disc that surrounds its host stars,”  astronomer Avi Loeb, chair of Harvard’s astronomy department who wasn’t involved in the study, told Salon. “In that sense, it resembles the orbit postulated for Planet 9 in the Solar system.”

According to Nguyen, there’s more work to be done on HD 106906 b. Researchers hope to use the James Webb Space Telescope, Hubble’s spiritual successor slated for launch next year, to confirm their data. Additional observations of HD 106906 b could help us determine how to go about hunting for the elusive Planet Nine, too