The twin Voyager probes continue to help us examine our place among the stars. 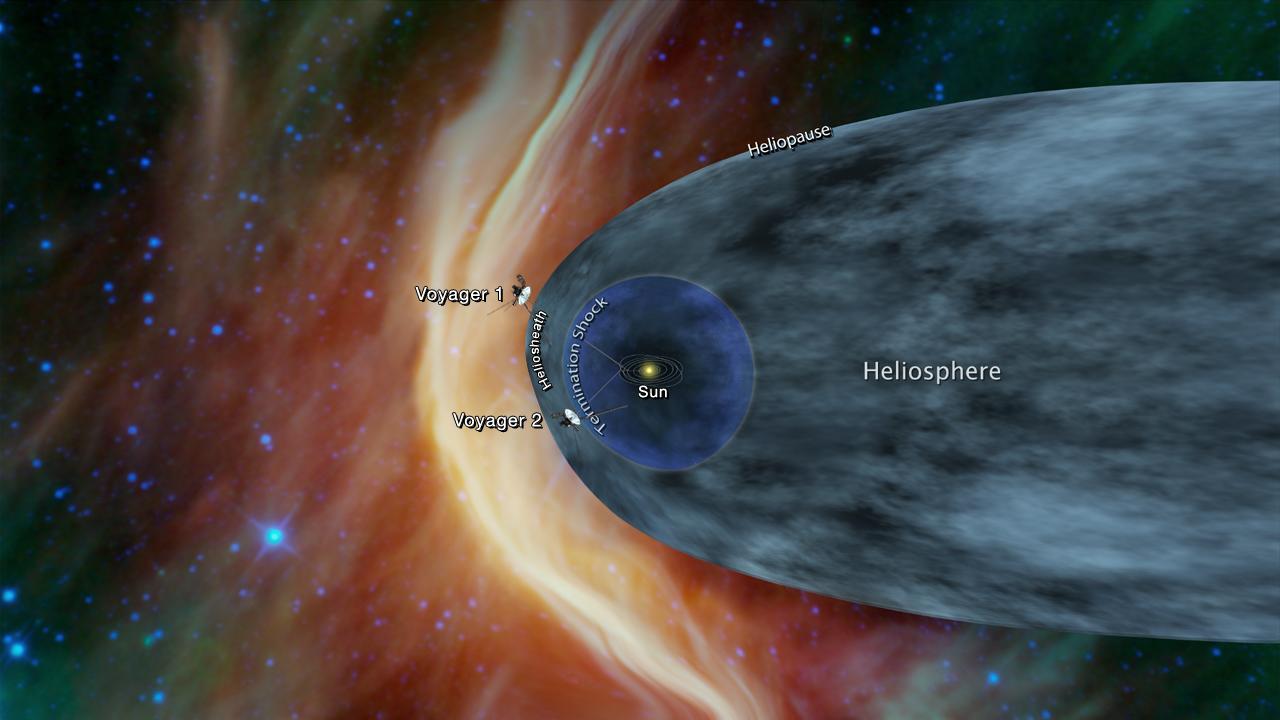 Voyager 1 and Voyager 2 are the only spacecraft to touch the bubble that surrounds the sun.
SHARE

The Voyager 2 spacecraft spent more than four decades surfing the solar wind away from the sun and out into the galaxy. Then, in less than a day, the probe burst from our sun’s protective bubble out into an interstellar sea of alien particles.

The exact shape of that bubble—which repels about 70 percent of harmful cosmic radiation—and how the inside mixes (or doesn’t mix) with the outside, are questions that have troubled researchers for decades. They’ve caught indirect glimpses of this edge of our cosmic backyard with radio waves and other observations, but their first direct contact with the mysterious boundary came when Voyager 1 sailed through it in 2012. Now Voyager 2, which joined its predecessor on the outside last November, has provided a second taste, in a second location. After a year of analysis, researchers have published a series of papers in the journal Nature Astronomy detailing Voyager 2’s direct measurements of the solar bubble that surrounds us—concrete knowledge of a physical structure that was purely theoretical while the mission was being planned.

“We didn’t know 50 years ago whether there’d even been a boundary there,” says Donald Gurnett, a professor emeritus at the University of Ohio and principal investigator of the Voyager plasma wave instruments.

While the primary Voyager missions were all about planetary exploration, the extended missions focused on the solar system as a whole. In addition to lighting up the sky, the sun also blasts out a solar wind of charged particles in all directions at around a million miles an hour. Although we tend to think of “outer space” as empty, this wind actually fills the solar system with a thin plasma (a kind of hot, energized gas) that gets thinner as the wind blows further from the sun. “It’s like spraying perfume into a room,” Gurnett says.

Eventually the solar plasma gets so thin—around one electron per Rubik’s Cube of space—that it can’t push away the stuff of interstellar space any longer. There’s plasma out there too, and it’s about 20 times thicker outside than it is inside the range of the sun’s influence—a zone known as the heliosphere. This sharp change from thin plasma to thick plasma was one indication that the crafts had entered interstellar space. “What we are measuring is our backyard,” says Merav Opher, a plasma physicist at Boston University who was not directly involved with the Voyager teams. “We’ve never been outside of our home in the galaxy.”

But now that the Voyagers are getting out into the local neighborhood (other defunct spacecraft are too, but they aren’t still taking data), researchers are comparing measurements from their respective locations and piecing together anything they can about the heliosphere’s overall shape and behavior. Voyager 1, for instance, managed to indirectly catch some whiffs of interstellar plasma while still in the heliosphere—indicating that the sun erects a drafty barrier around the solar system. “It’s almost like somebody opened a window and we got some interstellar material ahead of the [boundary],” Opher says.

During last year’s departure, however, Voyager 2 didn’t feel any such interstellar gusts. It also experienced solar breezes all the way up to the edge—a zone where Voyager 1 had reported doldrums.

More perplexing still is the behavior of the magnetic field. Voyager 2 backs up Voyager 1’s somewhat controversial magnetic readings suggesting that the magnetic field in the solar plasma aligns smoothly into the magnetic field in the interstellar plasma, showing little sign of a boundary. Opher says that a phenomenon called reconnection may be fusing the two fields, but that overall the heliosphere just isn’t as simple as some may have hoped. “We don’t really understand that envelope, that wall that separates us from the interstellar medium,” she says. “It’s a much more complex enterprise than we thought.”

To make matters more complex, the heliosphere isn’t really a sphere. The sun careens through space at nearly 60,000 miles per hour as it wanders through the Milky Way, dragging the whole solar system along and squeezing the solar bubble into what Gurnett calls a “blunt bullet shape.” There’s some discussion about what this bullet really looks like (Opher says it resembles the wake of a boat), but the two Voyager exit points are helping researchers start to pin down the shape.

Voyager 1 erupted from the bullet’s nose, while Voyager 2 popped out a bit below and to the left. Yet despite leaving through different exits at different times in the sun’s solar cycle (which is thought to inflate or deflate the heliosphere), both crafts encountered the bullet’s boundary at about the same distance from the sun, indicating that the bullet’s front is quite round. To figure out what the side or back look like, NASA may someday send another multi-decade mission to touch a different point. But in the meantime researchers will have to make do with IBEX and IMAP, current and upcoming missions that aim to map the heliosphere remotely, from much closer to Earth.

Ultimately, Gurnett speculates, Voyager’s legacy may be to emphasize the universe’s fondness for clean boundary lines, whether it’s the membrane of the solar system or the surface of the sun. Rather than abhorring vacuums, as the old adage goes, perhaps it’s smooth transitions nature really hates. “You might think as you go out into interstellar space it might be kind of a continuum,” he says, “but instead nature likes to make it into a real sharp boundary.”