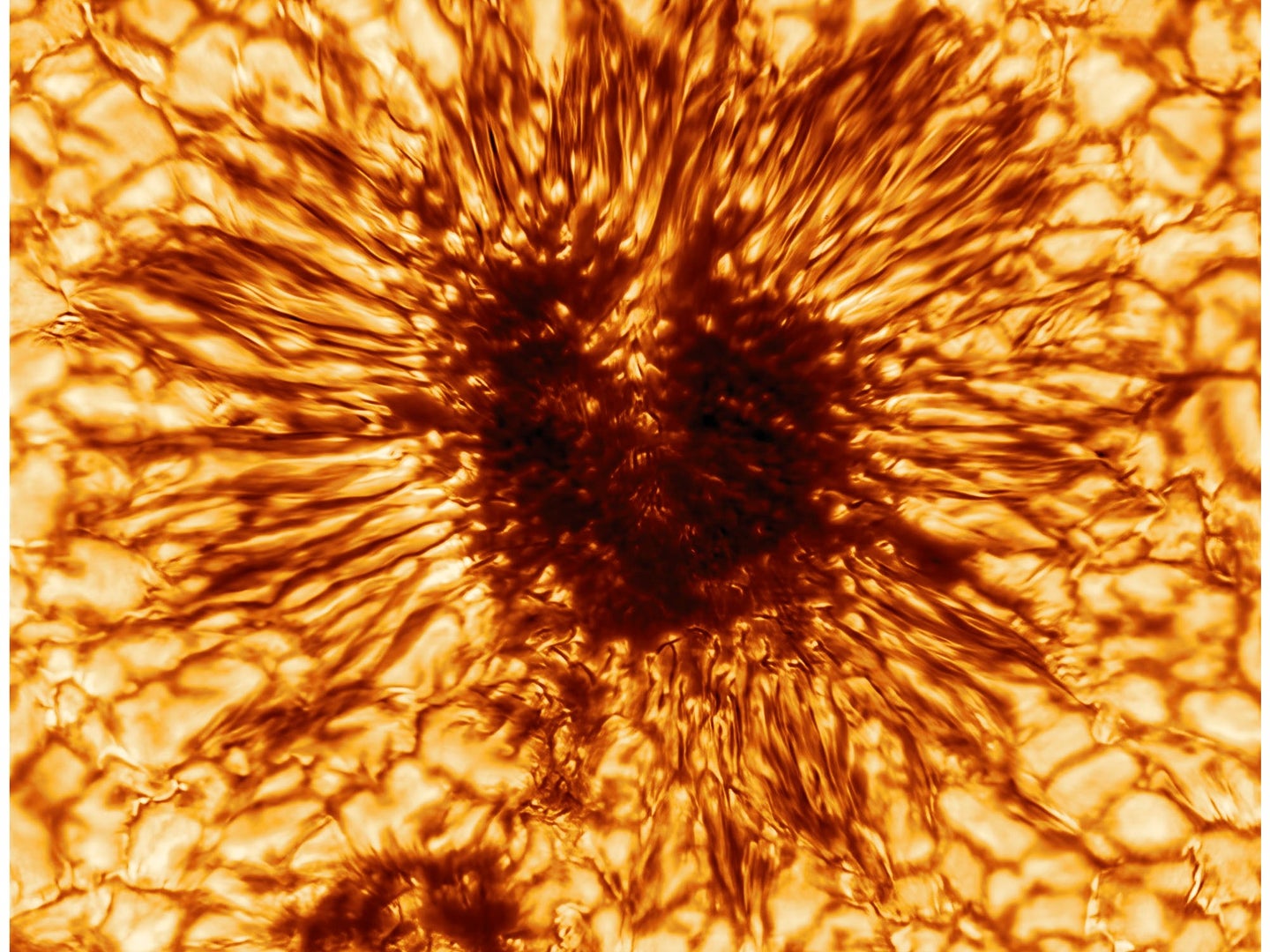 The sunspot was taken in the wavelength of 530 nanometers - in the greenish-yellow part of the visible spectrum–. Researchers modified it to show up red and orange to the naked eye. NSO/AURA/NSF
SHARE

Humans have long dreamt about looking directly at the Sun, even though it’s extremely dangerous for our peepers. Our nearest star is the centerpiece of religious and cultural traditions all over the world, from Ra in ancient Egypt to the sun goddess Amaterasu in Japan and the sun god Inti in the Incan Empire. Even as humans started building telescopes to look into every corner of the Universe, the Sun remained elusive. Only until earlier this year were we able to capture, for the first time ever, detailed images of the sun’s boiling surface. This week, the first image of a sunspot from the high-definition Inouye telescope was finally published.

Researchers at the world’s largest solar observatory, the U.S. National Science Foundation’s Daniel K. Inouye Solar Telescope, captured the image. It’s located on top of Haleakalā, a sacred mount for the Native Hawaiian peoples of the island of Maui.

“We can now point the world’s most advanced solar telescope at the Sun to capture and share incredibly detailed images and add to our scientific insights about the Sun’s activity,” said Matt Mountain, president of the Association of Universities for Research in Astronomy (AURA) in a press release.

Understanding the Sun’s activity has always been challenging. Astronomers have a clear idea of how solar storms—waves of electrons, protons, and atoms the sun shoots toward our planet—affect human technologies like power grids, communications, GPS navigation, air travel, and satellites. They also know how the internal processes of the boiling star create the bubbles that ultimately generate those violent energy spill-overs. But the details to predict when the blobs will explode, and how often it’ll happen, are still largely unknown. And that information would be useful—we could prepare for losing things like GPS in advance.

“On the sun we have some photos, a few extrapolations, and then there’s a lot of guesswork,” Dan Seaton said to PopSci earlier this year. The Daniel K. Inouye Solar Telescope (DKIST) is the largest effort to answer those questions. The $344 million facility takes images with as much as 2.5 times the resolution of previous images taken by other telescopes, capturing areas of the sun as tiny as 12.4 miles in diameter in full detail.

This recent sunspot image was captured on January 28 of this year, and it’s just one part of a bigger series. To capture the sunspot, the researchers pointed the telescope’s 13-foot mirror—three times wider than any other solar telescope—towards the central area of the star. They captured a sunspot of about 3,700 miles across, just a tiny part of the Sun, but large enough to fit almost half of Earth inside it.

The sunspot is about 7,500 degrees Fahrenheit—pretty cool compared to the most extreme temperatures of the sun’s surface, which get up to 10,000 degrees. The combination of intense magnetic fields and hot gasses boiling up from below the surface creates the streaky appearance in the image, as hot and cool gas spiders out from the darker center, said the NSO in a press release.

This sunspot also marked the beginning of a period of activity on the solar surface that’ll reach its peak activity in 2025, according to the team’s best predictions. “This image represents an early preview of the unprecedented capabilities that the facility will bring to bear on our understanding of the Sun,” said in a press release Dr. David Boboltz, NSF Program Director for the Inouye Solar Telescope. The time when humans look directly at the Sun—at least with a giant telescope—has finally arrived.