In ‘The Martian’ Trailer, Matt Damon Promises To ‘Science The S**t Out Of This’

Being stranded on Mars never looked so cool 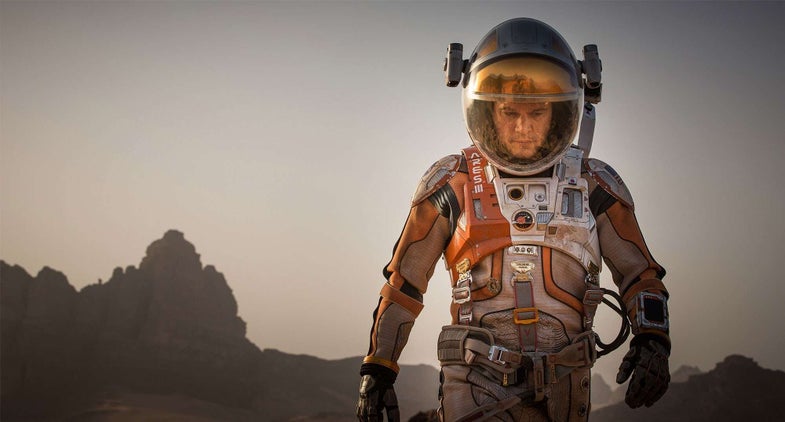 You’re on an expedition with a research team out in a desert wilderness. All of a sudden, a major dust storm hits. You and the group scramble to get to safety, when flying debris hits your side and knocks you out. After the storm subsides, you awake hours later to find that your team has left you behind in a vast wasteland after mistaking you for dead. But you’re very much alive—and no one knows it.

This would be a nightmare scenario on Earth, but imagine the wilderness is the Martian surface, and your crewmates didn’t just leave you behind; they left the entire planet behind. This horrifying set of circumstances serves as the premise for Andy Weir’s debut novel The Martian, which follows astronaut Mark Watney as he devises clever ways to stay alive on Mars after his crew leaves him behind. It’s a great book, filled with various puzzles, nerdy chemistry experiments, and a lot of cussing and sarcasm from Watney. Matt Damon’s Mark Watney must figure out how to grow food on a planet that may or may not support life.

Now, The Martian is getting a fancy Hollywood movie adaptation, with Matt Damon as Watney, Jessica Chastain as the crew’s commander, and Jeff Daniels as NASA’s fictional administrator. We saw a short glimpse of the crew of the Hermes yesterday, and the first official trailer for The Martian was released this morning. And it looks amazing! And maybe also a little silly.

Mostly, we can’t wait to follow Watney along as he solves one problem after the next—and those problems turn out to be many. As we know, Mars is not a hospitable place, and in The Martian nothing ever goes according to plan. Watney only has enough supplies to last him a month, but he must come up with a way to make them last for up to four years—when the next Mars mission is scheduled to land. How Watney works around each puzzling dilemma, such as finding ways to grow food in Mars soil and figuring out how to contact Earth, is a great mix of drama and realistically applied science and engineering.

The trailer shows glimpses of just some of the many setbacks he encounters along the way. Damon’s Watney is flung about by Martian storms and a powerful explosion knocks him many feet from his habitat. At one point, he uses duct tape to patch a hole in his helmet.

While graphics and imagery look stunning, it’s a fact of life that all films depicting NASA give the space agency an aesthetic upgrade. First, the space agency’s headquarters and Mission Control look way more shiny and polished than they do in real life. And the Hermes spaceship looks like a spectacular design, but I definitely want to know where NASA bought their sleek white kitchen furniture.

And staying true to form, Watney seems to be just as crass and as sarcastic as Weir envisioned. At one point, he notes that he’s going to “science the sh*t” out of this situation, and after a small victory, he proclaims, “In your face, Neil Armstrong!” Oh the nerdy humor—it burns!

We’ll still be first in line to see it though. Check out the full trailer below, as well as our interview with Andy Weir about how difficult it will be to pull off a Mars trip: