Kepler and the Universe

For most of us, the name “Kepler” brings to mind the Kepler Space Telescope, NASA’s eyes into deep space. So...

For most of us, the name “Kepler” brings to mind the Kepler Space Telescope, NASA’s eyes into deep space. So far, it has found 4,696 candidate exoplanets, 1,031 of which have been confirmed, and since losing a second reaction wheel, it’s been repurposed into the K2 mission. The Kepler telescope is amazing, but so was it’s namesake, Johannes Kepler. David K. Love, a member of the Royal Astronomical Society, has brilliantly chronicled Kepler’s life and principle discoveries in his new book Kepler and the Universe: How One Man Revolutionized Astronomy.

The sixteenth century was an interesting one for astronomy. For centuries the Aristotelean geocentric cosmology prevailed. The idea that all the heavenly bodies orbited the Earth in perfect circles moved by prime mover firmly kept man at the centre of the universe. But the observations didn’t support this view, an inconsistency that prompted Nicolaus Copernicus to suggest in his 1543 De revolutionibus orbium coelestium — On the Revolutions of the Heavenly Spheres — the heliocentric model wherein the Sun was central.

Copernicus’ view wasn’t an easy one to swallow, nor was it a safe one to believe in; decentering the Earth suggested that man wasn’t the centre of the Universe and therefore not the chosen species made in God’s image. The heliocentric model was condemned by the Roman Catholic Church as heretical, and promoting the ideas was deemed similarly criminal. And the idea was only 28 years old when Johannes Kepler was born on December 27, 1571, in Weil der Stadt, Württemberg, a town in modern-day Germany.

He developed a love of astronomy early on; he observed the Great Comet of 1577 when he was just six years old and watched a lunar eclipse in 1580. These events doubtlessly sparked his curiosity for science, but he chose instead to follow a religions path. Raised Lutheran, he studied theology at the University of Tübingen. It was here that he was introduced to Copernicus’ ideas, undeterred by their controversial nature, and ended up moving away from theology to teach math and astronomy in Graz, Austria.

In 1600 he moved to Prague to work under Tycho Brahe, an astronomer known, in part, for pioneering the geoheliocentric model wherein the Sun orbits the Earth but all the other planets orbit the Sun. Before his death in 1601, Brahe tasked Kepler with analyzing his as-of-yet unexplored observations. In pouring over his deceased colleague’s data, Kepler discovered that Mars’ orbit is elliptical, not circular. This discovery was published in his 1609 work Astronomia Nova, and it fed into what is now know as his first law of planetary motion: the path of the planets about the sun is an ellipse with the Sun as one of two foci. A second law also appeared in the work, stating that an imaginary line drawn from the center of the Sun to the center of the planet will sweep out equal areas in equal time. 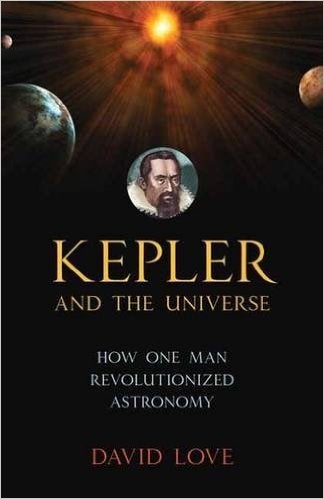 Kepler and the Universe

In 1612, Kepler moved on to Linz, and seven years later published Harmonices Mundi. This later work gives us Kepler’s third law of planetary motion: the square of the orbital period of a planet is proportional to the cube of the semi-major axis of its orbit.

The three laws of planetary motion are Kepler’s most well-known but far from his only contributions to astronomy. His 1604 Astronomia Pars Optica is credited with founding modern optics, describing the process of refraction inside the human eye and the means by which two eyes gives us depth perception. His 1615 work Stereometrica Doliorum was the basis of integral calculus. He was also the first to suggest that the Sun orbits around its own axis.

Kepler life and the conditions that led to each of his major discoveries are chronicled in impressive detail by Love, who focuses on the science without downplaying the religions and personal elements that impacted Kepler’s life. Kepler and the Universe is an accessible work that will probably appeal most to astronomy, history, and space fans, but it also won’t alienate neophytes with a strong interest in the cosmos. And at just over 200 pages, it’s fairly short, which makes it a great book for those long cross-country holiday flights!

Buy David K. Love’s Kepler and the Universe: How One Man Revolutionized Astronomy on Amazon.