On March 19th, the moon will be closer--and thus bigger--than it's been in two decades 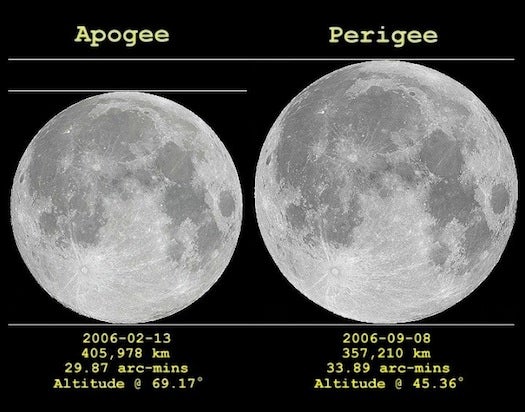 On March 19th, the moon will be closer to Earth than it’s been since 1992. The full moon that night will appear about 14 percent larger and significantly brighter than usual, but despite the brightness, the supermoon has a dark side. Supermoons have been linked to massive natural disasters in the past, from earthquakes to floods–but that connection is typically touted by astrologists. Astronomers and scientists, with typical drollness, say a catastrophe is unlikely.

March 19th marks this year’s lunar perigee, the point in the moon’s orbit at which it is closest to Earth. It’s the moon’s elliptical orbit that’s responsible for the differences in distance between the moon and Earth (the opposite, the point at which the moon is farthest from the Earth, is called the lunar apogee). This month’s perigee will leave the moon, says Steve Owens at Dark Sky Diary, about 8 percent closer to Earth than usual, and about 2 percent closer to Earth than the average lunar perigee. In fact, it’ll be the closest positioning since 1992.

Past supermoons have coincided with natural disasters–the Indonesian earthquake in 2005, Australian flooding in 1954–but scientists note that those are unrelated, more likely than not. Says John Bellini, a geophysicist at the U.S. Geological Survey: “A lot of studies have been done on this kind of thing by USGS scientists and others. They haven’t found anything significant at all.” The tides will pull a bit higher, but earthquakes are almost completely unaffected and volcanoes are not likely to show unusual behavior. John Vidale, a seismologist at the University of Washington in Seattle, said “Practically speaking, you’ll never see any effect of lunar perigee. It’s somewhere between ‘It has no effect’ and ‘It’s so small you don’t see any effect.'”

Besides, it’s still 2011. Everyone knows there won’t be any world-ending catastrophes until next year, right?