Though the odds do seem to be in our favor. 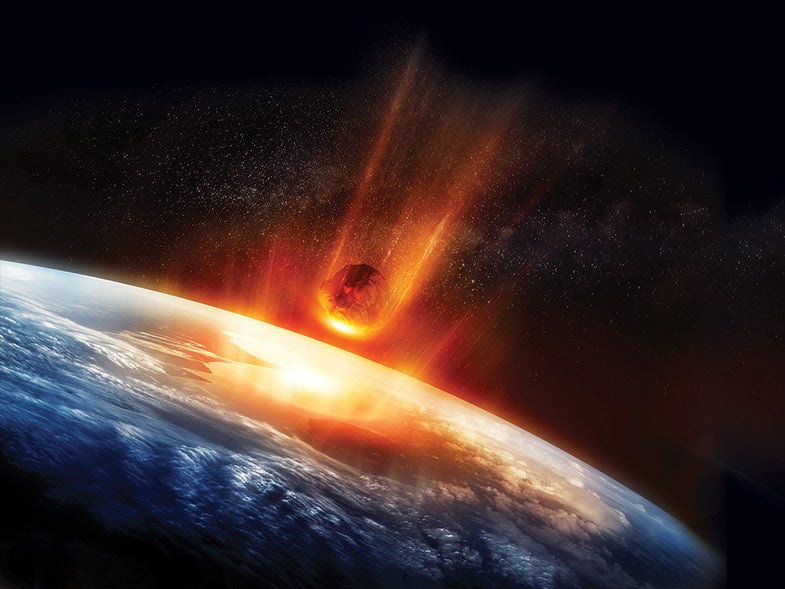 Earth is in a constant game of celestial bumper cars, colliding with—and obliterating—the relatively puny space rocks that dare cross its path. The planet is still standing after 4.6 billion years, but a modern collision could devastate cities, continents, and even life itself. (Just ask the ­dinosaurs.) NASA’s Center for Near-Earth Object Studies keeps watch on more than 18,000 potential troublemakers, ranging from just 3 feet to more than 3,000 feet across. Meteorites smaller than 100 feet usually ­explode in midair, like one did over Chelyabinsk, Russia, in 2013. There wasn’t enough shrapnel to leave a crater, but the sonic boom did blast out windows. So how much havoc could larger rocks wreak?

Lights out: This debris could throw enough dust to block out the sun—globally.

The dino killer: These can obliterate nearly all life—but our odds look good.

One reason these flying objects are so dangerous is their velocity. A zippier asteroid can do more damage. And these things are fast—­upwards of 44,000 miles per hour. All other factors (size, angle of entry, target) being equal, a faster asteroid can dig a bigger crater, and melt the rock it’s slamming into.

Composition is key. Metal asteroids are durable enough to reach the surface even at small sizes, while carbon-rich rocks almost always break up in the atmosphere. The stony sort—which make up 94 percent of all meteorites—fall somewhere in between. But even a broken-up hunk of space junk can cause a dangerous shockwave in transit.

More than 70 percent of Earth is ocean. If an asteroid happened to make a water landing, it might be less harmful than if it struck populated land. Experts do have some (minor) concerns about a tsunami, which occurs when large amounts of water get displaced, but the real worry is a high-speed projectile launching dust from the seafloor high into the atmosphere.