Ingenuity flew on Mars. Now NASA will push it to the brink of destruction.

Where NASA is going, they don’t need roads. Or even flat surfaces. 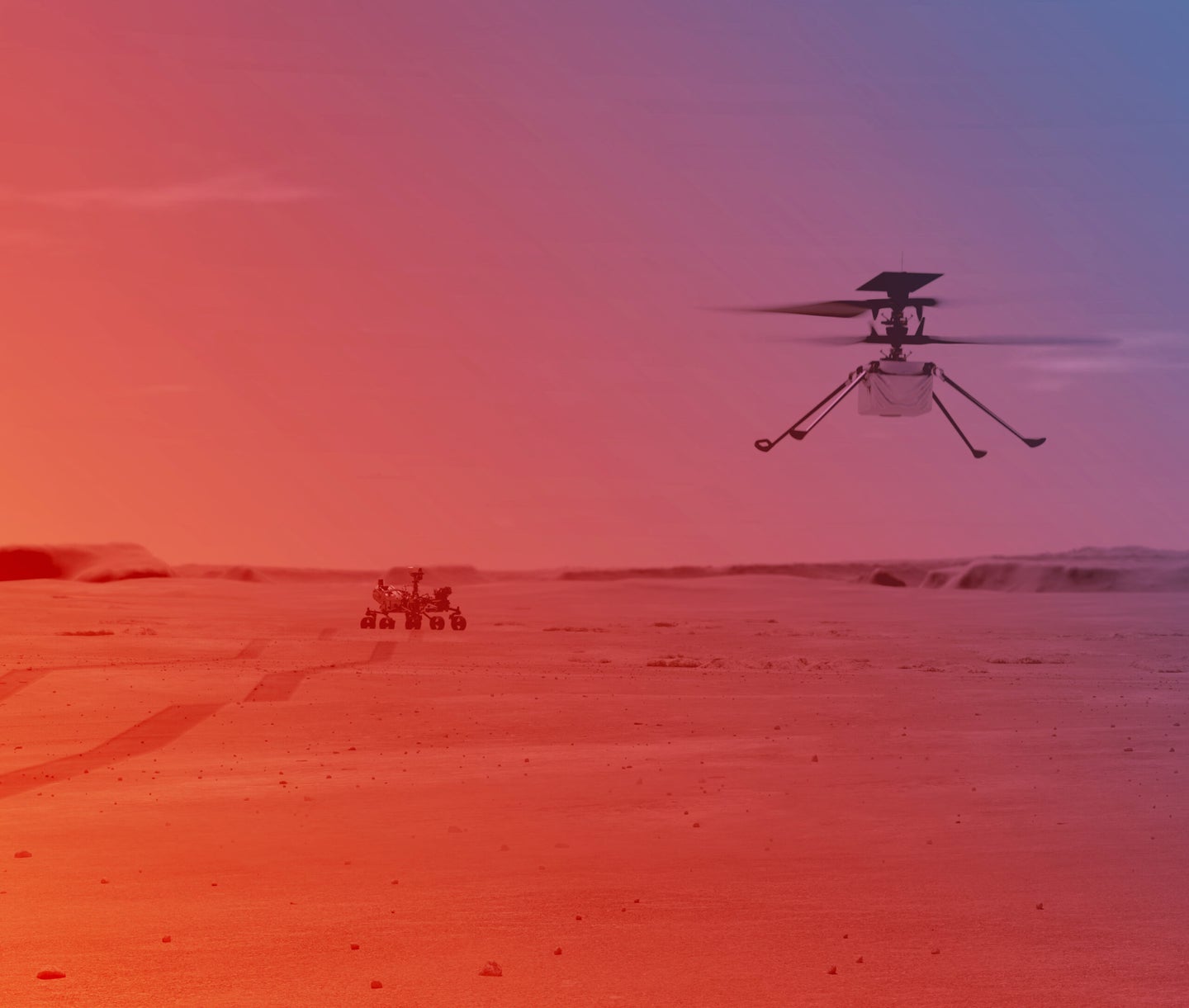 Early Monday morning, a wiry four-pound helicopter named Ingenuity spun up its blades and used them to push against the thin atmosphere of Mars enough to rise, hover, and return to the Red Planet’s surface.

For decades, NASA has sent robotic explorers to visit other worlds. Some zipped by. Many entered orbit. A few spacecraft landed. And a handful of elite vehicles drove across extraterrestrial surfaces. Now a machine has flown through alien skies for the first time. Cameras on both Ingenuity and the Perseverance rover documented the historic event, which demonstrated a first-of-its-kind technology for planetary exploration.

“What the Ingenuity team has done is given us the third dimension,” said Michael Watkins, the NASA Jet Propulsion Laboratory (JPL) director, in a press briefing on Monday. “They’ve freed us from the surface now forever.”

The road to liftoff wasn’t perfectly smooth. After the Perseverance rover deposited Ingenuity on the surface on April 4, JPL originally planned the first flight for a week later. But the craft didn’t react as expected during a high-speed spin test on April 9, and the flight was delayed. After extensive testing with Ingenuity prototypes here on Earth, the engineers gambled on a modified sequence of commands that would give them an estimated 85 percent chance of success.

They bet right. JPL engineers gathered in the wee hours of the morning to watch Ingenuity’s autonomous flight attempt live. After hopping off the ground with a burst of speed, the helicopter rose to a height of nearly 10 feet, spun around, and descended at a brisk three feet per second, landing almost exactly where it started.

Ingenuity made the flight look easy, but lifting off in the super thin air of Mars is no small task. The feat was the Earthly equivalent of flying at an altitude well above 100,000 feet. That’s two to three times higher than most commercial aircraft can fly.

After seven years of development and hundreds to thousands of simulations in a nearly airless chamber here on Earth, the JPL crew felt ecstatic and relieved to see the flight plan execute flawlessly.

“This morning, our dream came true,” said MiMi Aung, the Ingenuity project manager, while presenting a video of the event to the press. “Goosebumps. It looks just the way we had tested it in our test chamber.”

Now they’ve proven Ingenuity is capable of handling air just one percent as thick as Earth’s atmosphere. Moving forward, the team is keen to find out exactly how capable their space copter is. Over the coming weeks, engineers will command the craft to pull off a series of increasingly daring missions, raising it to an altitude of 16 feet, and then actually flying somewhere.

During the following tests, Ingenuity will try to glide sideways by 6 feet and then 160 feet, respectively. Eventually, Aung hopes the helicopter will venture a third of a mile or more from its take-off point. She described the upcoming flight program with the Right Stuff swagger of a daredevil test pilot, all but hoping for a crash that will precisely identify the edge of what’s currently possible for Martian aviation.

A new way to explore

That data could become invaluable if Ingenuity is to launch a new era of planetary exploration.

Senior JPL engineers recalled the 1997 Mars Pathfinder mission, which tucked a shoe box-sized rover named Sojourner into the stationary lander. Insider that shoe box-like machine were Pathfinder’s major science instruments. When Sojourner rolled down the ramp, it was the first vehicle to drive on another planet. Today the SUV-sized Curiosity and Perseverance rovers are central to NASA’s Mars operations. Perhaps one day, rotors will be just as essential in Martian exploration as wheels.

“Once something like this happens on Mars, the skeptics get converted and it soon becomes a new way of doing things,” said Justin Maki, the imaging scientist for Perseverance, who helped film Ingenuity’s flight from Perseverance, parked about 230 feet away.

What future mission-planners and scientists do with the power of flight remains to be seen. But at least in theory, the sky’s the limit.

“It’s not very often that they get to try out a brand-new technology on another planet,” says Matt Shindell, the curator of Planetary Exploration at the Smithsonian National Air and Space Museum, and who was not involved in the mission.

One short-term application could be scouting out ahead of future rovers. The team that drives the multi-billion-dollar machines moves them very slowly and very carefully. But helicopters don’t run into rocks or get stuck in sand traps,enabling speeds and distances unheard of in Martian exploration. If Ingenuity pulls off that third-of-a-mile test flight, it will cover in roughly five minutes a distance that took Curiosity months.

Other Ingenuity descendants might go it alone if they can bulk up. Designers agonized over every gram of the helicopter, but chief engineer Bob Balaram expects that future Martian aircraft could grow as large as 50 pounds, which would give them the power to lift around 10 pounds of cargo.

Equipped with cameras and other scientific instruments, helicopters could show us a whole new side of Mars. The Red Planet is home to dramatic features unsuited for simple wheeled exploration. Shindell hopes to see future rotorcraft access Mars’s deep canyons and steep mountains.

“You’re not going to drive a rover up the side of a volcano,” he says.

And the benefits extend indirectly beyond Mars. Each unique atmosphere will require its own type of aircraft. The upcoming Dragonfly drone mission to Titan, currently set to arrive in 2036, will have a comparatively easy time cutting through the thick air on the moon of Saturn. But the operational lessons JPL has learned about how to design, test, and simulate flight in an alien environment—and how to nail the liftoff on the first try—might come in handy.

Ingenuity’s specific technology may actually transfer more directly to our own planet. No helicopter has ever flown higher than about 7.5 miles. But you’d have to fly to an altitude of 28 miles to find as little atmosphere as what Ingenuity dealt with on Monday morning. Perhaps by bringing the Mars technology back to Earth, terrestrial crafts will also reach new heights.