Why the Mars Rover Curiosity’s Crazy, Complicated Landing Isn’t So Crazy After All

Intricate, untested sky crane airdrop is better than airbags, according to NASA 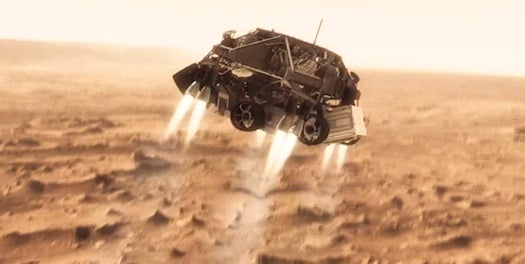 PASADENA — Later tonight, a white-and-orange spacecraft, shaped roughly like a chicken pot pie, will come screaming into the Martian atmosphere at 13,200 miles per hour. The fireball surrounding the Mars Science Laboratory craft will reach 3,800 degrees Fahrenheit as it descends, like a controlled meteor on a ballistic path. By 10:31 p.m. Pacific time/1:31 a.m. Eastern time, NASA hopes to hear that it safely slowed to zero MPH in seven minutes of terror, and is ready to explore Mars.

The entry, descent and landing (EDL) of the Mars rover Curiosity is one of the most interesting aspects — and certainly the most insane part — of this beefy-armed, laboratory-toting, car-sized explorer. NASA engineers and managers keep saying it’s the most complex landing ever attempted on another planet, and that’s certainly true. But the Rube Goldberg-esque sky-crane delivery system is neither the most dangerous nor the most risky. It’s really the only thing NASA engineers think would work.

The Mars Exploration Rovers, Spirit and Opportunity, fell to the surface on parachutes and bounced toward the ground in a cushion of airbags. And the Viking landers touched down on their own unprotected legs, using a parachute and then retro-rockets to slow themselves down. But this rover is too heavy and too big to use airbags — it would have needed so many, the rover may never have escaped their post-landing deflated tangle — and putting it on a three-legged landing platform would have meant driving off it somehow, which would have required a smaller rover.

“After a lot of careful thought and analysis, the sky crane not only starts to look less crazy, but it has a large number of extremely valuable capabilities,” said Jordan Evans, flight systems development manager for the Entry, Descent and Landing team. “It just turns out to be fairly elegant.”

Here’s what will happen tonight, starting around 10:07 Pacific time:

The software controlling Curiosity will handle everything autonomously. After this command is entered, the EDL sequence begins. First, the MSL spacecraft jettisons two laptop-sized pieces of tungsten ballast, which will tweak its entry angle to create a lift force, like an airplane wing. This helps it steer using thrusters on its sides. Then about 7 miles above the surface, a supersonic parachute deploys to slow it down. It’s not enough, however — to come to a stop, Curiosity needs a rocket-powered descent stage and a spool.

A mile from the surface, the still-smoldering spacecraft cuts its chute and drops out of the aeroshell, free-falling toward the surface. “We’re learning to fly, and we don’t have wings — getting down is the hardest thing,” said NASA’s Mars program manager, Doug McCuistion, quoting Tom Petty.

After a few seconds of free-fall, the sky crane system fires up its retro-rockets. At this point, Curiosity is tucked in its descent stage, pointed wheels down and exposed, with no airbags. Radar on the spacecraft’s belly starts looking for the ground, checking for a soft, even spot to put down.

A few meters from the surface, three tethers unspool, lowering the rover at 2 MPH toward the surface. The rover’s tough shock-absorber system can handle the drop; you can imagine the joints creak as the wheels hit Mars dust. Then three explosive knives slice the umbilical cord, and the descent stage, rockets still roaring, flies away to a crash landing about 450 meters away.

Allen Chen, Flight Dynamics and Operations Lead for the EDL team, said there was early discussion about using the descent stage as a secondary lander, but it was quickly dismissed in favor of a crash landing. “It’s already hard enough to land once,” he said. “It’s done its job then. It dies a hero.”

This entire sequence will happen automatically, with 79 explosive devices firing in perfect succession to release the chute, aeroshell, heat shield and more. Engineers at NASA’s Jet Propulsion Laboratory will have the same view as the rest of us, and won’t be controlling anything from Earth because of the 14-minute light-time delay between the two planets. Curiosity is on her own. It will send brief X-band radio tones, basically texts from Mars, letting everyone on Earth know what’s going on — but we’ll lose the signal right as the parachute deploys, when Earth sets on the Mars horizon.

McCuistion noted that a launch is often a spacecraft’s most troublesome, tumultuous experience, but this craft has a long way to go. “We haven’t finished with the scary and the risky,” he said.

NASA has been trying to manage expectations for the launch, noting that “Mars is hard” and that a majority of missions to the planet have failed. The science investigators, rover designers and EDL engineers are all visibly nervous, yet also outwardly confident it will work. Each component has been tested and re-tested hundreds of times, and Evans said this helps a bit.

“None of those one things make me worry — they make me feel confident. Then I worry about the whole thing,” he said.

Adam Steltzner, also of the EDL team, summed it up succinctly Sunday morning: “We are rationally confident and emotionally terrified,” he said.

McCuistion has said several times that if the mission fails, the engineers will pick themselves up, dust themselves off and perhaps try again. They have little choice. “The science is on the surface,” he said. “We need to keep going back.”