To green or not to green? 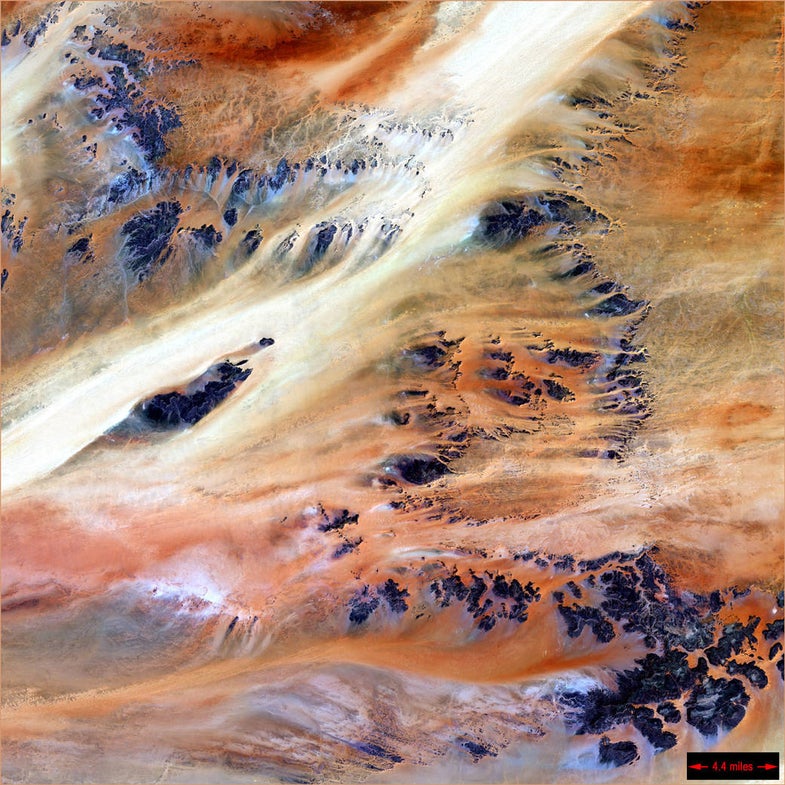 Think of the Sahara, with its windswept dunes shining in the sunlight. Some people might see barren land, with minimal water or life and scorching temperatures. Others see a potential solution to a looming energy crisis, and one that could potentially make it rain in one of the largest deserts in the world.

In a paper published this week in Science researchers found that by building out huge wind and solar farms across the desert, they could not only provide a stunning amount of power to Europe, Africa, and the Middle East, but they could simultaneously change the climate—increasing heat, but also increasing precipitation and vegetation in areas that could sorely use the added greenery. They estimate that such a venture could double the rainfall in the region, and increase vegetation cover by about 20 percent.

How much green are we talking? The Sahara covers 3.55 million square miles (9.2 million square kilometers). In the study, the researchers ran computer models that placed wind turbines across the desert close to a mile apart, and covered 20 percent of the desert with solar panels in different configurations (sometimes the panels were spread across the desert in a checkerboard pattern, and in other cases were concentrated in quadrants). Smaller coverage produced smaller climate impacts—in this case, less precipitation—but much of it depended on the location of the turbines and panels as well. For example, installing panels in the northwest corner had a larger impact than the other three desert options.

Covering parts of the desert with darker solar panels meant that less sun bounced off the Saharan sand, which is unusually light in color, and therefore has a higher albedo than other non-polar deserts. That means that typically the Sahara reflects more light and heat back into the air. Reducing the albedo by installing darker solar panels could actually increase precipitation in the region even as it increases the temperature around the solar panels. Warmer air rises to areas in the atmosphere where it’s cooler, and moisture there condenses and falls as rain.

“In 1975 Jule Charney, my PhD advisor at MIT, proposed a feedback mechanism to help explain the drought in the Sahel, the semi-arid transition region south of the Sahara: Overgrazing increased surface albedo (reflectivity), reduced precipitation, and in turn further reduced vegetation. About a decade ago, I had the idea that this feedback would work in the opposite direction in the presence of large solar panel farms, since they would reduce the surface albedo,” said Eugenia Kalnay, a lead author of the paper in a press release. “Similarly, wind farms would increase land surface friction and convergence of air, thus producing upward motion and precipitation.”

With more rain, grass and trees could slowly grow back into the once-lush landscape, sprouting between turbines and solar panels as they do on existing farms.

But building a massive solar farm doesn’t happen overnight, so the researchers programmed the computer model to look at what would happen during a 100 year buildup period, and during the 100 years after the plants were built.

“If we can finish building all the wind and solar farms immediately, some of the effects on atmosphere would be observed almost immediately. But the effects due to the vegetation–albedo–precipitation feedback mechanism would take some time before it could be observed, because vegetation needs time to grow (within a few years). In reality, the effect would grow as the size of wind and solar farms that have been installed grows,” two of the lead authors, Yan Li and Safa Motesharrei, said in an email.

This wouldn’t be the first time that humans have altered the Sahara. It used to be a much wetter, greener area than it is today.

“The Sahara is a critical biome for humanity in terms of being a reservoir of cultural and ecological diversity,” David Wright, an archeologist at Seoul National University wrote in an email. He points out that even today, the region isn’t just mass of sand, but has mountains, hills, and small rivers and lakes, home to thousands of species.

“Our earliest known ancestor following our lineage’s split from other apes, Sahelanthropus tschadensis, has been found in the Sahara. During the African Humid Period (ca. 11,000-5000 years ago), the Sahara was a vast, diverse ecosystem dotted with lakes and fisherfolk. It became a site of early domestication of cattle and camels and donkeys. It is the site of vast continental overland trading networks managed by empires. The Sahara has much to teach us about how humans have adapted to climate change in the past,” Wright says.

A paper Wright published last year proposed that cattle herders moved into the region between 8,000 and 4,000 years ago. The cattle did what cattle always do, eating away the vegetation, and in the process enhanced the albedo—speeding up the shift from a wetter Sahara to a bone-dry one.

“Human impacts pushed the natural system over the threshold of desertification, and in places where humans entered ecosystems with their animals, the transition from wet to dry far exceeded the pace that would have occurred in the absence of those pressures. Such changes have been demonstrated time and again from deserts ranging from the Atacama to Mongolia to the Sahara,” says Wright, who was not involved in the new Science study.

Researchers have linked climate change with the Sahara’s continued growth. The desrt has grown 10 percent since 1920.

The authors of the more recent paper did not look at other ecological impacts that could be caused by large installations of wind and solar farms in the Sahara, but they think the increased rainfall would overall be a boon to the people who live in and around the region.

“The top 10% of the world’s population is producing about 50% of the world’s carbon emissions. Thus, if the poorest 90% of the world population aims to bring its standard of living up to the level of the richest 10% using fossil energy, that would increase total energy use and emission of global greenhouse gases by five times,” Li and Motesharrei say in an email. To give the whole world access to development—without pushing climate change even further—the authors argue that we need as much clean, renewable energy as possible.

The prospect of purposefully altering the climate is obviously fraught with ethical questions. But Wright points out that we’ve done it before. “Humans are, by nature, niche constructors. We evolved as niche constructors and our niche construction activities will have one of two possible outcomes: either it will save our species from extinction or doom us to extinction. Human societies have already placed large ecological footprints into desert and semi-desert environments,” he says. “In terms of willingness, yes, people are certainly willing and able to construct dozens of energy plants in the deserts and semi-deserts of Africa. Whether it is prudent to do so is an open question. This study suggests it is prudent, but as they indicate, there are more costs to such projects than just ecological.”

Analyzing the costs and benefits for such a world-changing project is daunting under the best of circumstances, but the stakes here are particularly high. Especially for the people who live in the region already.

“It is up to local people to determine if they are willing to gamble on developing energy infrastructure, which could have recursive effects within the broader ecology of the region,” Wright says. “In the context of Industrial-Era geopolitics, such development projects are likely to benefit very few people in the areas where they are constructed even though the ecological impacts to them will be the most severe. The benefits will flow to the already-developed areas of the world, which assume no risk and only reap the benefits,” Wright says.

The authors of the paper also advise a considered approach to any action that might be taken in the future.

“Implementing such large-scale solar and wind farms has become increasingly possible, but requires proper planning and visionary decision-making, plus co-operation of policymakers, companies, stakeholders, and people. We hope that all these local and global actors and stakeholders co-operate and make this a reality,” Li and Motesharri write. “This could be the best chance for sustaining life on this planet while improving the quality of life for everyone.”