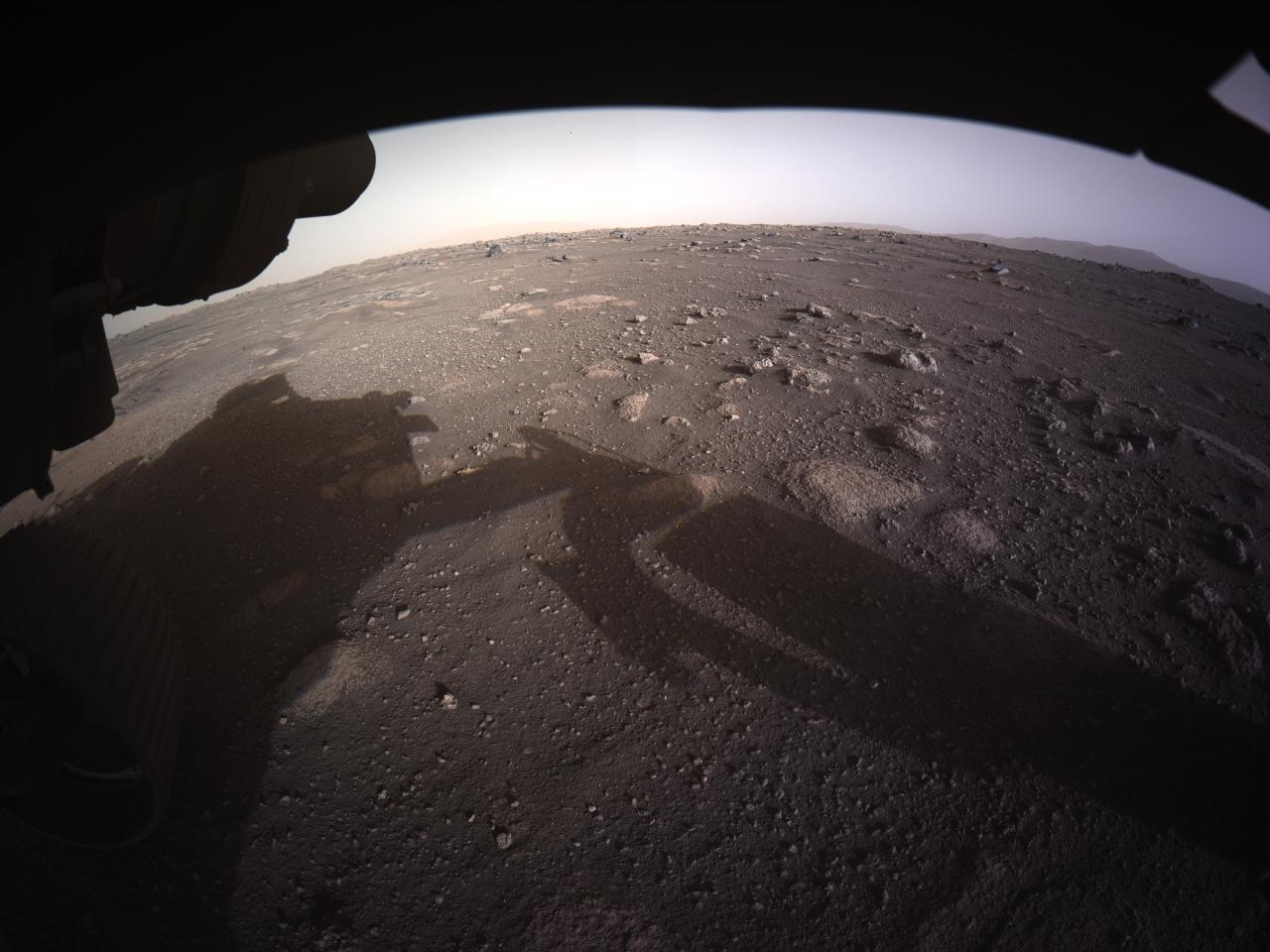 The first high-resolution color image to be sent back by the Hazard Cameras (Hazcams) on the underside of NASA's Perseverance Mars rover. NASA/JPL-Caltech
SHARE

After a journey lasting seven months, the Perseverance rover touched down on the surface of Mars last week. And in its first few days, it’s already sent us Earthlings some detailed images of the red world.

On Monday, NASA released a video showing Perserverance’s first glimpses of the Martian landscape as it descended to the western edge of a crater called Jezero, named after a town in Bosnia-Herzegovina. NASA and JPL chose Jezero because another probe, the Mars Reconnaissance Orbiter, looked at the crater and found traces of clay—a material that needs water in order to form. Therefore, scientists believe that some 3.5 billion years ago, Jezero was the bed of a primordial lake. If life ever formed on Mars, this would be a great place for it to have thrived.

NASA also released Perseverance’s first full-color, high-definition image of its new home. You can see some hills peeking from the backdrop: they’re actually a 3-billion-year-old shoreline. In fact, scientists think that those particular slopes were once a delta, where a river met the lake that turned into Jezero Crater and deposited layers of sediment onto both the shore and the lakebed. Perseverance, if it can find a way up, could explore that delta. And if you look from above, you can still see the ghost of that river to Jezero’s west, a channel called Neretva Valles.

This hi-def image was taken with one of Perseverance’s visible-light Hazard Avoidance Cameras, or Hazcams, which sit at the rover’s front and back and help the rover navigate itself. The Hazcams also help controllers back on Earth see what’s around the rover, like the rear-view camera in your car. The video, meanwhile, was shot using several other high-definition visible-light cameras, including one attached to the “skycrane” that helped lower Perseverance to the surface.

You might notice that the landscape is strewn with little rocks. Scientists aren’t sure how those rocks formed; they could have been deposited there by the river, or they might have been birthed from now-dead volcanoes, whose ash might have been carried across the red planet by the Martian winds. That’s something Perseverance could uncover. And don’t worry about Perseverance getting a flat tire—those rocks are no obstacle for the wheels of a rover that’s the size of a large car.

Perseverance’s mission, if all goes according to plan, will long outlast the rover itself. A future mission is primed to collect some of the rover’s rock and soil samples from Jezero later in the 2020s, before bringing them back to Earth so that scientists can search for perhaps the holiest of Martian holies: traces of extraterrestrial life.