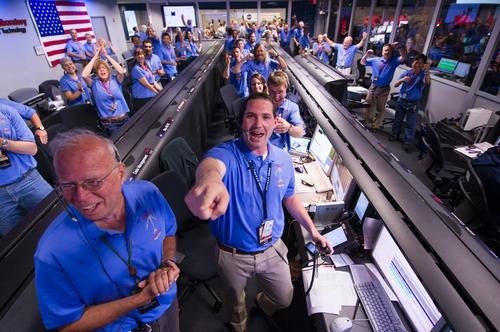 PASADENA, Calif. — Long minutes of thunderous applause greeted the managers and engineers who paraded into an auditorium here Sunday night, triumphant after a perfect landing on another world. The Mars rover Curiosity sent a picture from the Martian surface just moments after its self-piloted descent and airdrop, and everyone assembled at the Jet Propulsion Laboratory could not help but cheer. It’s a huge moment for NASA, which delivered the rover over budget and two years late — but delivered it, and beautifully.

Nothing is harder than landing on Mars, and no one does it better than the United States, said Charles Bolden, NASA’s administrator. In a few moments of proud flag-waving, Bolden, White House science adviser John Holdren and others trumpeted the space agency’s momentous achievement.

“Tonight, there are at least 4 countries, and I won’t name them, who are on Mars. And they’re on Mars because they went with the United States,” Bolden said. “Our leadership is going to make this world better.”

The landing comes at a transition time for NASA and space exploration generally — the agency retired its storied space shuttles a year ago, and its Mars program has been in question amid ongoing federal budget debates. A successful landing carries much more than the promise of groundbreaking science — it’s a moment fraught with enormous pressure, weighing on the agency’s prestige, and this was evident in all the speeches and words of congratulations Sunday night. 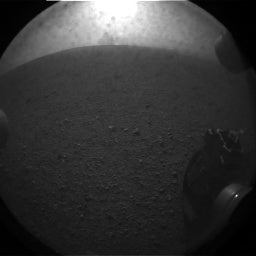 Includes a bit of wheel

“It will stand as an American point of pride far into the future,” Holdren said of Curiosity.

Obama himself said via Twitter that the U.S. had made history once again. “I congratulate and thank all the men and women of NASA who made this remarkable accomplishment a reality,” the tweet said.

So many people followed the landing on Twitter and through NASA channels that the space agency’s websites briefly crashed in the moments after the landing. Members of the public (and media) who were hoping to access Curiosity’s first images via a special NASA site were instead greeted with error messages. It was a frustrating glitch, but it was also strong evidence of the public’s fascination with the robot geologist and all it represents.

Charles Elachi, JPL’s director, said he hoped the landing would inspire new generations of engineers and spark their curiosity. It’s what NASA is about.

“This movie cost you less than seven bucks per American citizen, and look at the excitement we have,” he said, to further applause.

Later Monday, we’ll have even more images, including a spectacular shot of Curiosity on the parachute, plummeting toward the surface. Stay tuned, and don’t forget to check out the rest of our coverage–from the forecast on Mars to why the landing is justifiably crazy/complicated to NASA’s playoff beards–over here.