Why Is It So Hard to Land On Mars?

As Mars rover Curiosity approaches its terrifying landing, we have to face the fact that ‘Mars wins most of the time’ Mars is not a friendly place. It’s freezing, windy, barren, and quiet except for howling dust storms that can threaten hopeful visitors. The planet is kind of a jerk, really, presenting vindictive obstacles to thwart the robotic explorers sent toward it for the past 47 years. And Mars usually wins.

In the decades since humans started sending spacecraft to Mars, the Red Planet has outscored us handily; humans have only about a .411 batting average overall — not great for missions that cost billions of dollars and countless time to build. Seventeen landers have been sent, and just seven made it to the surface safely, each of them with varying degrees of success. NASA is attempting the most complicated mission ever with its new Mars rover Curiosity, which will ring in Attempt No. 18. The rocky history of Mars explorers is weighing on managers’ minds, and not just because of Curiosity’s intense autonomous landing.

“Is it crazy? Well, not so much — once you understand it, it’s not so crazy. Is it risky? Landing on Mars is always risky,” said Doug McCuistion, director of the Mars Exploration Program at NASA headquarters. “Mars throws things at you. Dust storms, atmospheric density, wind.”

Landing something on another world, anything at all, is very difficult to do, especially when the place is very far away and so inordinately inhospitable. Past landing attempts are proof of this.

Humanity’s first mechanical landing attempt was a failure, when the Soviet Union’s Mars 2 lander crashed after its braking rockets did not fire. Mars 3 arrived a few days after that disaster, on Dec. 2, 1971, becoming the first successful landing on Mars — but it relayed only 20 seconds of data before it, too, died on the dusty surface. A handful more Soviet missions either crashed or missed the planet entirely; then came the American Viking landers, a major success for the U.S., entering Mars orbit during our bicentennial year. 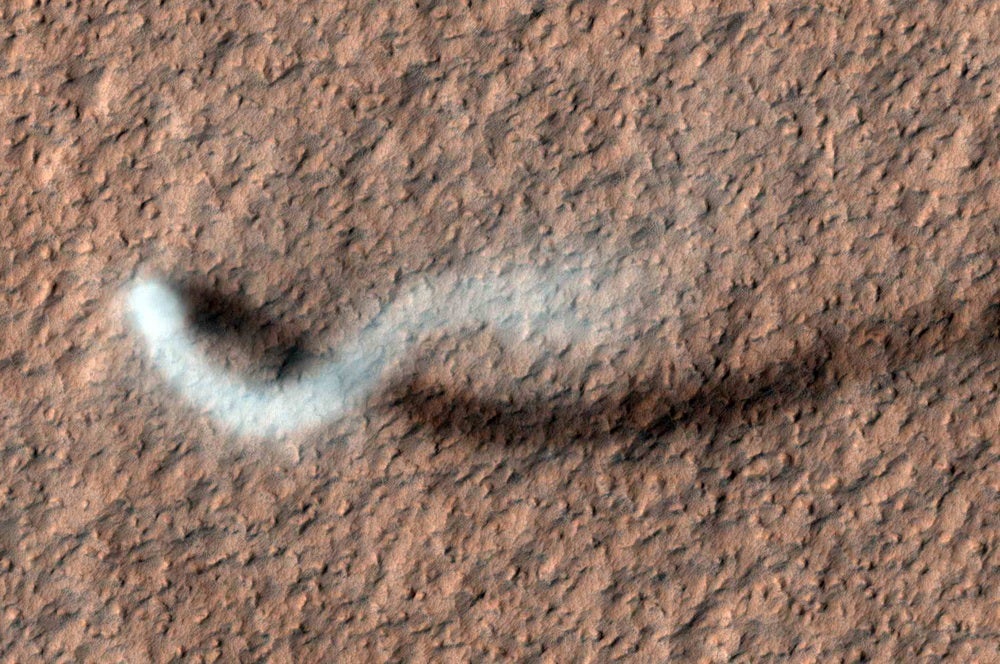 Massive dust storms, similar to this serpent-like dust devil, plague the landers and rovers that humans have tried to send to Mars over the decades.

The Viking missions contained experiments to study the weather, photograph panoramic views of the landscape, and even look for microbes — those results are still being debated, actually. But they were successful in the mere fact of their landing.

Nothing went to Mars for another decade after the Vikings landed; the USSR sent the Phobos missions, 1 and 2, in 1988 to land on one of Mars’ moons, but neither probe made it. A few orbiters were sent in the 1990s — the U.S. lost one and delivered one successfully — but the next lander wouldn’t arrive for 20 years after Viking. NASA’s Pathfinder lander and Sojourner rover arrived on July 4, 1997, and drove around on the surface, to the delight of scientists and the public.

This was supposed to be followed by the Mars Polar Lander, also known as the Mars Surveyor mission, but in an epic failure, the mission’s orbiter was lost because one engineering team used the metric system while another used English units. The lander also failed following a premature engine shutdown and hard landing.

2003 saw both failure and success — Europe’s Beagle 2 lander (named for Charles Darwin’s ship) never communicated with Earth, but the Mars Exploration Rovers Spirit and Opportunity arrived on opposite sides of the planet, bouncing in airbags toward safe landings and deployment. Both far outlasted their warranties; Opportunity is still rolling. Still, Mars finally beat Spirit, trapping her wheels in sand and preventing the rover from reaching enough sunlight to survive.

“Mars wins most of the time,” McCuistion said.

NASA’s Mars Phoenix lander is the most recent successful mission, capturing images of Martian snow before succumbing to the harsh Arctic winter. And now comes Curiosity, bringing the most complex organic chemistry lab and geology tools ever sent to another heavenly body. It is designed to last a full Martian year — two years in Earth time — and find out once and for all whether Mars could have been habitable.

But habitable does not mean hospitable. Curiosity faces several hurdles in its attempt to scale a -mile-high mountain at the center of Gale Crater — and that’s assuming it lands safely, handling any errant dust storms or wayward winds Mars may offer on the night of Aug. 5.

McCuistion said NASA was created to take on big challenges, and MSL defines that phrase. Paraphrasing Robert Kennedy, he said, “Only those who dare to fail greatly can ever achieve greatly. MSL is poised to do great things.”