The Many Ways Mars Rover Curiosity Might Phone Home 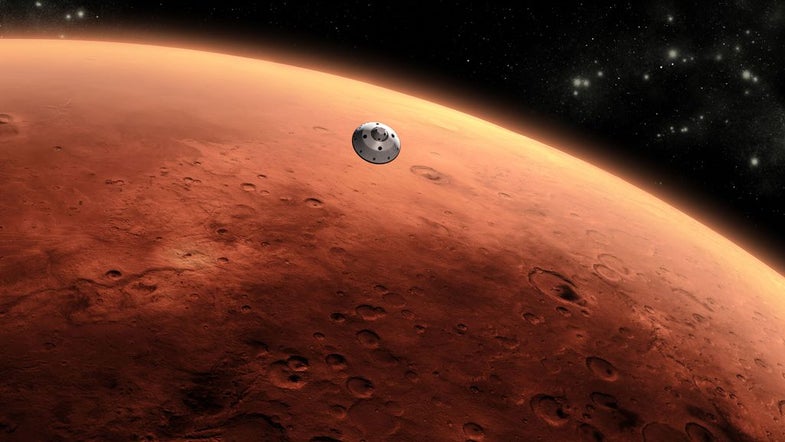 This artist's concept shows the Mars Science Laboratory spacecraft approaching Mars. In this illustration, the Curiosity rover is safely tucked inside the spacecraft's aeroshell. The mission's approach phase begins 45 minutes before the spacecraft enters the Martian atmosphere, according to NASA. For navigation purposes, the atmospheric entry point is 2,188 miles above the center of the planet. This illustration depicts a scene after the spacecraft's cruise stage has been jettisoned, which will occur 10 minutes before atmospheric entry. NASA/JPL-Caltech
SHARE

PASADENA, Calif. — It’s finally landing day — or so everyone here at the Jet Propulsion Laboratory hopes. After eight months of travel, the Mars rover Curiosity is just hours from phoning home to announce its arrival, scheduled for 1:31 a.m. Monday on the East Coast and 10:31 p.m. Sunday here in California. It might not call right away, however — or at least we may not be able to hear it if it does. But silence from the Red Planet does not mean all is lost.

On its final approach today, the Mars Science Laboratory spacecraft carrying the rover will continue to communicate directly with Earth, but this only lasts through the first part of its “seven minutes of terror.” As the spacecraft’s supersonic parachute deploys, Earth sets below the Mars horizon, cutting off contact through the Deep Space Network. The Mars Odyssey orbiter will be flying right overhead, however, and serving as a vent pipe (to use NASA terminology) to funnel data back to Earth. “That’s what we’re going to be glued to,” said Steve Sell of Curiosity’s Entry, Descent and Landing (EDL) team.

But there’s a catch: Curiosity is landing in a crater. Craters have walls. And Odyssey is not very high on the horizon on this pass, so there’s a chance the rocky terrain will cause it to miss the landing signals, too. In that case, the mood at JPL will grow even more tense, as everyone waits for the next flyover. This will be at 12:30 a.m. Pacific time Monday, when Odyssey makes its next “overflight” at Gale Crater.

This is a lot of time zones to keep straight, not to mention the time on Mars itself. Curiosity lands at 3:19 p.m. local Mars solar time, in case you were wondering. To figure out what time it will be where you are, go here to check out a handy chart produced by the Mars Science Laboratory team.

If the second Odyssey flyover doesn’t work, NASA will listen again at 11:30 a.m. Pacific time on Monday, when the orbiter flies over yet again. Then the Mars Reconnaissance Orbiter flies over the landing site at 11:40 a.m. After that, if NASA has still not heard confirmation of a safe landing — and everyone at JPL is still breathing — the next best thing is to listen for Curiosity itself, which will send a beep to the Deep Space Network’s worldwide collection of enormous dish antennae after Earth is again within its view. That will happen at 5:30 p.m. Pacific time Monday.

“This could be, in fact, the first time we hear from it, depending on what’s occurred,” said Richard Cook, deputy project manager for the mission.

The odds underlying these different scenarios are hard to pin down, because a lot depends on exactly where the MSL spacecraft punches through the Martian atmosphere, and the geology where Curiosity touches down. Obviously, everyone hopes to hear the X-band radio signals from the rover until Earth sets, and then see data in real time from Odyssey, flying just where it should be. But we’ll have to wait and see. Stay with us here and on Twitter today for the latest!